I came here to say that.

Please stay out of my thread, thanks.

We talking quad derby / inline / both ?

Somebody could DIY an aluminum frame for something like this and use conventional Esk8 pneumatic wheels and pulleys. The Nordic skate form factor is what I would personally want, since it’s very long and low compared to conventional roller blades, which will make it much more stable and controllable at high speed. 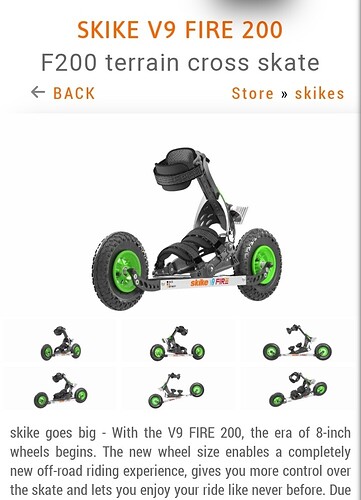 Why talk to people when you could buzz them at 40mph?
Edit: also how is wearing monster truck shoes not a conversation starter lol

I feel like a frame like that would be better suited to a hub motor. Think 2 small scooters that don’t turn.

Well sure that would make it look cleaner, but you could mount a belt-driven motor directly over the rear wheel, and then you would have enough power to introduce your ass to the pavement whenever you please

Since we’re talking inline, a little advice from my humble experience

There’s a major point not to overlook if you want a quality ride and keep it nimble and not dull and heavy, and that’s pivot point.

Pivot on skateboard is taken care of by trucks leaning and rotating while on inline skate you do the pivot yourself.

Tyres make this per se harder and something like the Nordic isn’t meant for agility nor road but dirt, gravel and snow where the ground doesn’t keep you tightly gripped.

Speed skates and downhill generally have long wheelbase but always wheels in the middle.

There’s more of course but the first often overlooked thing, yet primordial, is this one.

In regards to this thread. I am working on an E roller skate, but what is this theead meant to achieve. Have someone give out their invention only for someone to steal it? I won’t give my idea out until I’m able to gain a patent on it. If someone beats me to the MY creation, so be it, but I’m not just giving my idea away.

That’s not quite how turning inline skates works, unless you have some degree of rocker that lets you literally pivot around one of the wheels like a top. Wheels of all sorts generate lateral grip when they are pointed in a direction different from the one they’re currently moving, creating a slip angle. So if your foot points into a turn a little bit, the skate creates grip force like this:

…where V_skate and V_asphalt are not aligned. To continue the turn, the skate needs to continue spinning at the same rate as your body, which creates different slip angles at each wheel. If you stood still and tried to spin the skate on the ground, there would be a 90 degree slip angle at each wheel and the grip would look like the case here in blue:

The grip force that results from rotation clearly provides a torque that resists that same rotation. The same pattern of grip occurs when the skate is rolling forward, but the faster the skate is rolling in comparison to the speed that it is rotating, the smaller the slip angle and therefore the smaller the torque that resists rotation. That’s why skates are harder to turn at low speed, but get twitchy at high speed; their stability is decreasing as they get faster. Making the wheelbase longer increases stability, because the grip force is farther away from the center, and therefore creates more torque. Adding wheels in the center decreases stability, because it moves some of the grip to the center, where it generates less torque (compared to front/back wheels only in the purple arrows case). Center wheels also improve ride quality because they can bridge over cracks in the road instead of falling into them.

I’ve hit 40 miles an hour a few times on my speed skates, and the experience of doing so has led me to conclude that standard roller blades (even speed skates) are not at all suited for the higher end of the esk8 speed range. A lower speed electric skate would be fine with the standard layout, but I would personally want to be capable of cruising at 30 mph because I’m lacking in good sense.

So my thought process for choosing Nordic skates was that I want the maximum directional stability (long wheelbase), high ankle stability (low ride height), and big wheels so that you don’t get trashed by bad roads. Since those three factors mean giving up the center wheels, they should be pneumatic so that you get better ride quality as well. That’s also helpful because there is already esk8 equipment for mounting pulleys to pneumatic wheels, but there isn’t anything for urethane rollerblade wheels yet. Yes, this will make the skates feel dead at low speed. But that’s a design choice, and there isn’t one single correct speed range to design for.

EDIT: Ok in hindsight that was probably getting into it a bit too deep, but my point is just that not having center wheels is a difference of degree, and not a difference of kind, with respect to turning stability.

unless you have some degree of rocker that lets you literally pivot around one of the wheels like a top.

This might be my case as I run 3 wheel speed slalom as my main and my wheel wear definitely shows the pivot behavior.

Interesting analysis about the slip angle and counter slip angle which allows you to actually turn and acts as pivot.

What your schematic cannot show is the load applied to each wheels, which is far higher when you ditch the middle wheels.

I actually went and compared on asphalt for several days 2 wheels vs 4 wheels before ditching definitely the 2 wheels setup as it acted as I described before, you both lose nimbleness and also lose grip efficiency + axles were more strained. You need a beefed up frame and wheels anyway in 2 wheels setup (or very tiny like for aggressive skates).

Basically be it slow or high speed I can switch directions like its nothing. It’s as easy or even easier than it’d be with 4x80mm short wheelbase.

Now it’s definitely not the best setup for very high speeds but works for me.

I used to DH my short speed slalom around 60kmh/ +35mph kinda easily, guess we should go at it together some time

Gotcha even if in my experience I disagree

Funny how it can change from one rider to another !

This might be my case as I run 3 wheel speed slalom as my main and my wheel wear definitely shows the pivot behavior.

Now it’s definitely not the best setup for very high speeds but works for me.

I used to DH my short speed slalom around 60kmh/ +35mph kinda easily, guess we should go at it together some time

I’ve heard good things about triskates getting a tiny rocker through wheel wear, i wanna try it sometime.

Cool to hear about your 2 wheel experiments, tbh it still sounds like the behavior I would want to have at high speeds so that I can pay attention to things like the road and traffic instead of needing to pay attention to stance and muscle tension all the time, it’s mostly a safety thing for me. I agree that I would never want to skate analog with two wheels though.

Haha you’ve got some tungsten kahones to be riding slalom skates that fast. My experience might not be representative, since I have pretty bony ankles that usually prevent me from getting good heel lock in my boots. I usually end up hitting speed wobbles earlier than the other people in my skating group.

Were you able to try narrow liners with laces all to the top ? Maybe this could help, true I kinda train to have good ankle and leg support but I’m also on the slim side and it wasn’t easy finding my own fit

Was lucky to have the Flying eagle liners work out of the box for me in the triskates, got another pair and fitted it too in my Roces m12

I’ve heard good things about triskates getting a tiny rocker through wheel wear, i wanna try it sometime.

Definitely I got hooked at this setup, cannot encourage you enough to try it

I have done this on my commuting skates, but there’s still a pressure point at my ankle bones, so I usually fix it buy DIYing some EVA foam inserts to encircle my ankle bones and distribute the pressure.

My speed skates are of the carbon fiber/very little padding variety. When I heat mold them, my ankle bones make the heel cup flare out and I can’t press it into the contours of my heel tightly enough. I’ve also fixed this somewhat with foam inserts.

As for everyone else - good discourse so far, Ty.