I’m looking at either building or purchasing a board similar to the Exway X1 pro as an every day reliable board that I can “set and forget”. For the most part, my trips will be short enough that the built in range should be enough. However, I do like to take longer rides every once in a while, and I’m wondering if someone can tell me if my concept is dangerous or not feasible in any sense.

I would want to build an external battery that I can attach to the board and that I can plug in parallel with the built in battery and therefore extend the range of the board. Assuming the following:

Would this work? Has anyone does something similar? Thanks for your input.

any reason why you think the different chemistry will not work? based on what I know from batteries the fact that I would be connecting in parallel would mean that different battery chemistry will not be a problem. BTW the battery types would most likely be Li-Po and Li-ion cells (maybe 30Q). The charging port idea would be nice but I don’t think the internal circuitry would be set up or able to handle the simultaneous charging and discharging of the battery, which is why I was considering this alternative.

Nah charging was a joke

I don’t think you could join the two in parallel but I could be wrong. I think you would be better off looking at a charge and ride solution…

I plan to make a charge and ride system for my board and I want to get the community’s advice first before continuing to avoid turning myself into a human torch. Ingredients: Battery BMS Boost Converter Option 1 Option 2 Option 3 RECIPE Battery -> BMS -> Boost Converter (Limit output current to 4A)-> Board (Riding) Anything I missed?

Charging and discharging simultaneously is usually fine because you really can’t charge and discharge at the same time. You can either charge or discharge- no load = charge, load greater than charge current = discharge.

Also, for your external pack, I’d recommend a charge / discharge BMS, especially if you go the charge while riding route. You don’t want your external pack to die because it charged your board and went too low on voltage.

In the past I’ve used a boost converter connected to power tool batteries on a 3d printed mount that allowed for hot swapping the power tool batteries for more range. It was super convenient, and as long as I had more batteries in my bag to swap, I’d never run out of charge. They also have built in BMSs that cut off power when they run out of juice, and a voltage meter that beeps at me when it’s time to disconnect or swap.

I’ve thought about doing the parallel pack thing, but it wouldn’t be hot swappable on the road due to the voltage differences- you would have to set it and forget it at least for that ride. Batteries in parallel will keep each other balanced, so I’m sure lipo+liion would be fine as long as you don’t get either pack below the lipo’s minimum safe voltage. Honestly though, I think the boost converter/charge while you ride solution is best. Easy, modular, configurable, hot swappable, not dangerous. I still carry my boost converter and external batteries to charge if I’m away from an outlet.

Ok so if I were to use LiPo batteries wired in the same configuration (I believe 12s) would I not be essentially just be adding extra P groups to the internal battery? wouldn’t this just drain the built in battery and the external battery all as one large battery and therefore give me an accurate range estimation/battery level readout? I think this would also mean I would have to place my leads to plug in parallel between the battery and the built in BMS, but correct me if I’m wrong. I would assume that this would be the easiest solution because it would allow me to charge the larger battery using the original charge port as well. Is there any real advantage to doing the charge while riding solution? Also- I hadn’t planned for the extra battery pack to be hot swappable since I had anticipated they would just discharge at the same rate meaning adding a fresh pack to a drained battery in parallel would mean trouble. thanks for your help.

How do you intend to connect the external battery to the board’s pack?

I realize now that it will most likely be not possible to connect the external battery before the bms, although that would have been ideal. In theory I think it would be possible to basically take an xt-90 Y splitter and leave one end open (or with a loop key to complete the circuit) when not using the extended battery and then simply plugging the battery extension into the open end when I want to use it. would this cause any issues you think? I would still need to figure out if the packs would discharge at different rates which may be a problem.

Reviving this old thread. I’ve been thinking about an extension battery pack over the last few days. My idea is to have a reasonably lightweight board with a standard size single stack battery pack such as 12S4P. This would be more than enough for casual after-work riding. To do a full day exploring trip, it would be nice to add maybe 12S8P, i.e. have 12S12P in total.

The extension pack would be top mounted mountain board style and have a wire that plugs into the enclosure to connect the two battery packs in parallel.

This seems pretty straightforward. I have three questions though:

One other thing I’m considering is to have a loop key for the builtin battery pack and take it out before connecting the external pack, i.e. use only one pack at the time and never connect them in parallel. When riding, use the builtin pack until it’s low. Then switch to the extension pack. Would that be better?

never running them together would be the best option I think. otherwise they need to always be plugged in together and both be the same capacity or one will drain before the other and start parallel charging

I’ve been thinking about this and I’d actually question the same capacity.

it’s fully charged ? the Voltage would determine if they start parallel charging

I’d say the same. I had a extension battery which I connected in parallel, worked perfectly when voltages of both packs were close (I heard about max 1V, at least in RC world) using them separately adds flexibility which I missed with my solution. I’m also adding a 10s6p pack to the internal one on my Blutstern since its an 4WD AT build now. It needs more capacity so I want it to work in parallel and separate this time.
Different capacity hooked up in parallel is no problem at all, they balance themselves out.

Right. I’m only considering the scenario when both packs are at the same voltage level initially. But you said:

one will drain before the other and start parallel charging

Not sure what you meant by that.

Why not create a way to plug and unplug each pack from the outside?
On a ride, you connect the pack that’s inside, but when that’s out of juice, you would disconnect that pack and connect your second pack (that you would carry in your backpack/mounted on the deck like a MTB) in it. 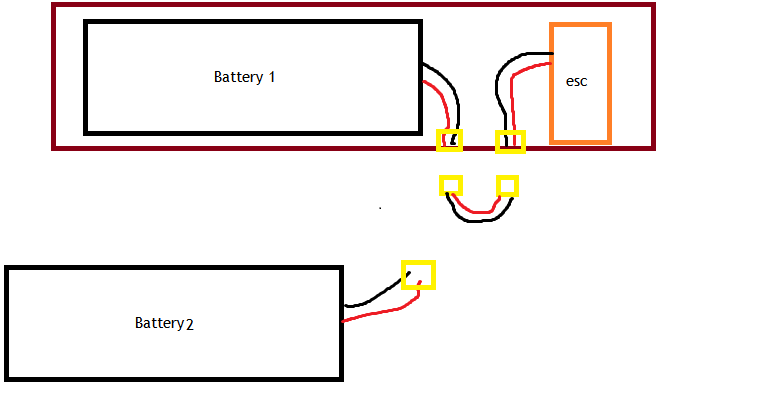 image781×394 4.13 KB
I’ve always had this idea to add an extension to my board, it would be a nice way to avoid mixing 2 different charged up packs together.

This way, you could easily add or remote a second battery pack that you may or may not need.

let’s say you have 10Ah inside , 20Ah outside, when you start draining one will be higher voltage than the other

let’s say you have 10Ah inside , 20Ah outside, when you start draining one will be higher voltage than the other

I don’t believe this is true. If you had 10Ah inside and 10Ah outside and another 10Ah outside, would that be OK?

Mmhh, I’m pretty sure that they balance out as soon as voltage drops on one so that voltage is never lower on one or the other. Inside a p-group its the same, if one cell has lower capacity it doesn’t matter since its refilled with energy from the others on the fly, keeping the whole group balanced at all times.