Can I plug it into either or does it specifically have to be the one end? According to how I have the batteries connected to the VESC or is it redundant?

The black balance pin going to the BMS should be the one on option 1 because the GND or - for that cell is the only actual 0V once you have the packs chained in series, when you hook one pack positive to the next pack negative you are raising the GND voltage effectively for the next cell in the chain in series, once you hook them in series you can imagine it is just one big 10S pack with 10 cells in series and now the BMS needs to measure the voltage of all cells in the pack and be able to individually charge or discharge them.

You should be able to check with a multimeter as well put the black lead in the negative of the first battery pack then use the red probe or a wire attached to it to check in the balance lead pins to see the voltage going up.

Thank you for the detailed response that helps a lot!

Also to clarify with wiring the positive my original plan was as follows now I’m realizing this means it needs to be plugged in to charge does that matter? Or am I better off going directly to the battery? 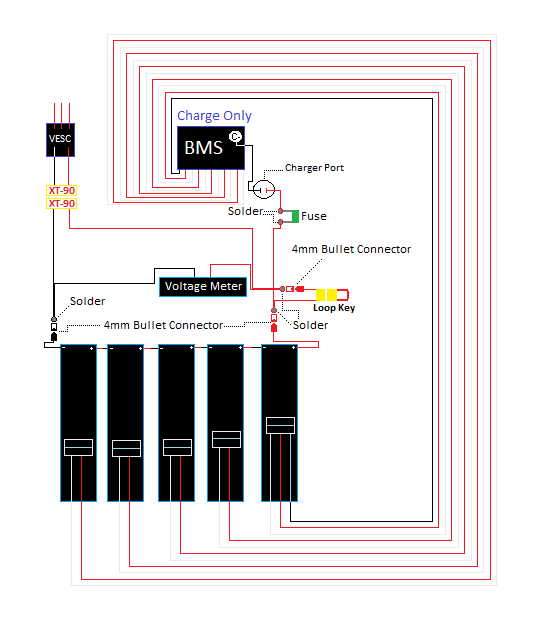 Think you really just want the loop key to cut the power that goes to the voltage meter and/or the vesc alone and just have the battery direct to BMS really so yah would make parallel connection from the one battery lead would just solder across the three wires can use some small gauge wire to wrap them in a bundle all pretinned and then solder the whole blob together and heatshrink over it.

Disclaimer I have not wired a BMS myself but am pretty good at EE stuff too (computer science but I tinker with electronics a lot).

Thanks again, just to clarify what I mean is the charging port cable is the final connection to be made.

I couldn’t do it as I intended with that diagram as the two cables wont fit into 4mm bullet.

I’m not sure if I should be connecting the charge port cable direct to the battery positive or if it matter if I connect it to the loop key positive. (afaik it just means it will need to be plugged in to charge) only reason I’m hesitant to cut the battery cables at this stage. 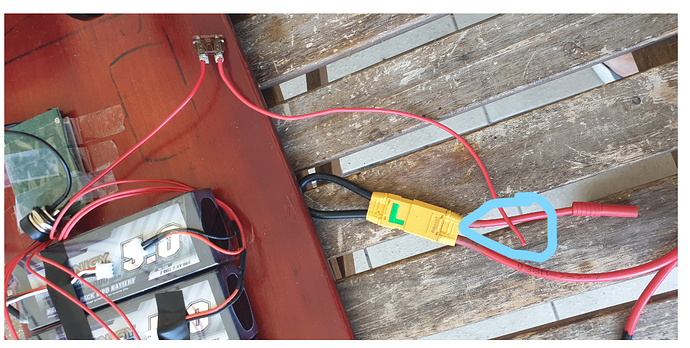 Only thing I’m not understanding is where you refer to soldering all 3 wires?

Yah you could just cut off some of the shielding and wrap the one wire around the other to make the connection and solder it that way but end up with a big blobby mess when dealing with thicker wires and wrapping them like that…also not the easiest thing to cut off the shielding in the middle, basically do it like dissection cut around with an exacto in two places then a line between them and peel the shielding off. But yah I think that or making the “Y” connection by wrapping all three with very thin wire after pretinning everything then soldering is the way to go.

Would this work or nah?

I still struggle to understand how the BMS picks up the negative but if the above doesnt work how it cant pick up the poitive through the balance cables? Also general battery question. When I charged using my balance charger I pugged the pos/neg and balance cables in (do i actually only need to charge in the balance cables to charge and the others if wanting to disharge)

It would “work”… Until it starts on fire

Think both the charge current from BMS and discharge current to the ESC especially would be too high to run through that little connector and balance wires.

Fire is definitely not my ideal outcome