I’ve got a load of BMSs that I’m not going to use.
All new, a few of them are open as they either came in a 2 pack or the leads came in another pack.

First up there is a 10s and a 12s version of this tiny BMS.
http://www.bestechpower.com/37v10spcmbmspcbforli-ionli-polymerbatterypack/PCB-D503V1.html
These do NOT balance. Use under supervision or with a separate balance circuit.
£10 each

Next up, the ever popular Bestech HCX-D140. Two of them for 12s SOLD

Postage at cost.
Payment in F&F or cover the fees in G&S.
Photos in a moment.

Do you have an idea what shipping to California would be? I might want one of the d140’s 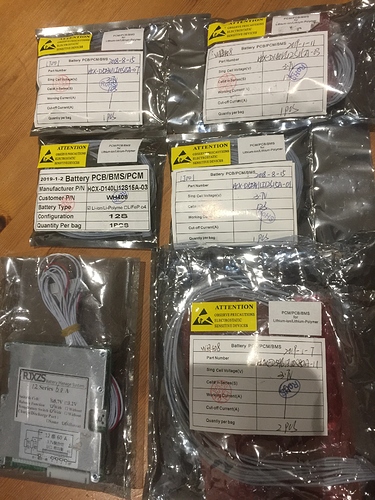 Untracked international economy, looks like I could get it sent for £3.50??
Tracked is £8.65

I’ll take the supower 60a

if shipping to MN is similar price as to CA

Meh okay, I think I will just stay with my 8S and make my pack 8S6P instead of 10S4P

It’s not really the shipping cost I just don’t need to spend the money right now, thanks though.

This might be the wrong place to ask this, but what makes Bestech BMSs (or specifically these models) any better than the cheap ones you can get from China? Are these more reliable / charge more efficiently / balance more aggressively / or something? Not hating, just curious

I know no science behind my feelings, but using a recognised brand of BMS and to some extent certain models that have been tested gives me more confidence in my batteries.
With a lot of time, effort and money involved in putting the cells together I have always spent a few pence more.

What Ben said. Especially when using a discharge BMS in which case a failure can leave you without brakes.
Bestech discharge BMS are the only BMSs I know for sure and that only goes for certain models.
a) will not cutout when going down a step hill with a fully charged battery
b) will allow me to exceed the BMSs rated charging current when setting battery regen.

Why risk it with a unknown?

BKB has them too around the same price

The BesTech D140 is widely used to balance charge battery packs. It is ultra reliable and affordable. The max discharge current is 15A and should be bypassed for esk8 use. The max charge current is also 15A so you can safely rapid charge you pack. Be...

Excellent, will do thanks.

Hey which of these do u have left? Cuz I need two or three 12s bms.