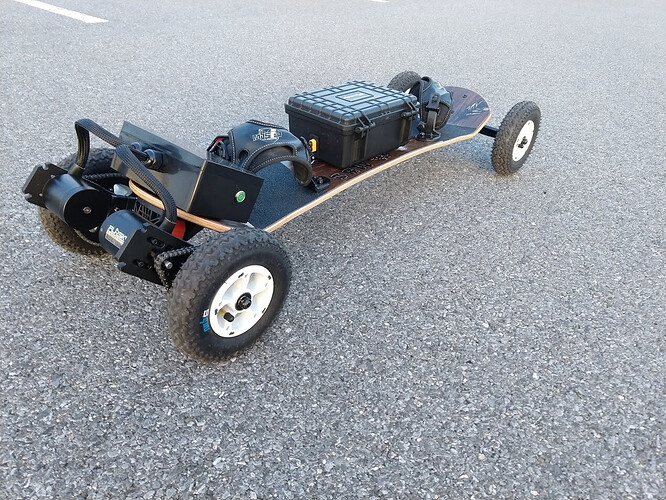 I took advantage of this holiday season to build my first board, and incredibly the time from first parts procurement to a finished board was just under 3 months.

This post is a summary of the entire build process because Discourse sucks for drafting, I have a far more detailed but boring build log that I maintained during the build process in a blog. If you’re interested in that, feel free to check it out here.

Reserved for idk what yet

Great achievement on a budget!!

Did you notice any slippage on the velcro at all? Id love to use velcro to hold a peli down but seems risky

Nope, their industrial stuff is pretty sturdy. The hooks are different from normal Velcro, with two barbs and a thicker stem. I’ll have to see how they hold up long term, but I’m not removing it often so I think it should last a while. It’s supposed to be good for 1lb per square inch, and I used 15 sq in for the battery enclosure, which should be ok since gravity keeps it in place as well.

Velcro losses its velcro-ish-ness when exposed to the environment. I heard reports of battery boxes falling off with 3M dual lock which is supposed to be the strongest of velcros. Vibrations are the killer here.
Make sure to have some sort of extra anchor point!

Hmm yeah I’ll keep that in mind. There’s lock holes on the box, so I can tether it to the binding through those just in case.

Definitely a lot of things to get used to but a great build to price ratio.

For the throttle jolt, try messing with the negative throttle ramping speed (or something very similar near throttle curve mapping)

I was thinking about building something similar with the MBS Comp 95 Mountainboard complete. how did you get the 20% off coupon?

It was an old code that expired in December. Even still, the regular permanent 15% off code for this forum (ESK8BUILD15) is pretty close.

Great achievement on a budget!!

but a great build to price ratio.

This is a fine example of quality to price ratio wholesomeness. Good job!

I do it. It’s fine. Never budged, even after hard falls where the board rolled head over heel on asphalt.

Honestly I attribute that to how far this hobby’s come along in a short while. The fact we can get $250 VESC75/300 ESCs and decent sub $100 motors would have been unthinkable even one or two years ago. Even in the prebuilt space, the boards have come a long way.

would you mind linking the chain drive components?

Sure thing, although looks like the exact wheel sprocket is OOS. You can also most likely find everything cheaper elsewhere, but hey free Prime 2 day shipping.

If I were to build again I would have gone straight for the 12 tooth motor sprocket instead. 10 is great for off road, but a little slow on the road and noisy. 12 should be a much better hybrid gearing.

Learned a bit about the limitations of Velcro today. I used a little bit to mount a tail light to the rear enclosure so I could easily remove it when going offroad or to charge it, and while it holds up fine during regular riding, it fell off during a jump. Looking more closely, it appears that in this particular Velcro, the hooks are directional, and are facing sideways rather than vertically. Had it been rotated, it might have held better. Also, the surface area is pretty low and it’s mounted at an angle, which doesn’t help. I believe 3M dual lock should hold better in this application, where there is no expected flex in either component. 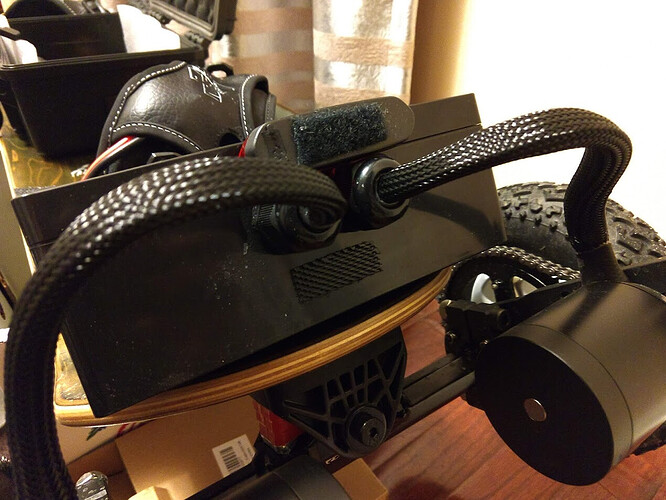 Also printed a GoPro mount for the front of the deck just because. Footage angle isn’t terrible, although I think I need to shim it with some tape to reduce vibrations, as with a dive housing it just sounds like bass boosted wind noise at any speed. It almost drowns out the drivetrain noise, which is pretty impressive considering this is a chain drive. I tested with a generic action cam for the maiden ride, gonna swap to my actual GoPro to see if it improves. 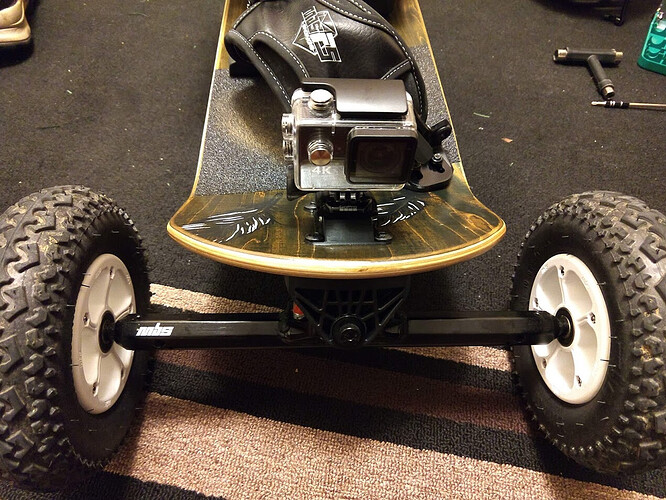 Finally got my complete today. Thanks for telling me the coupon! 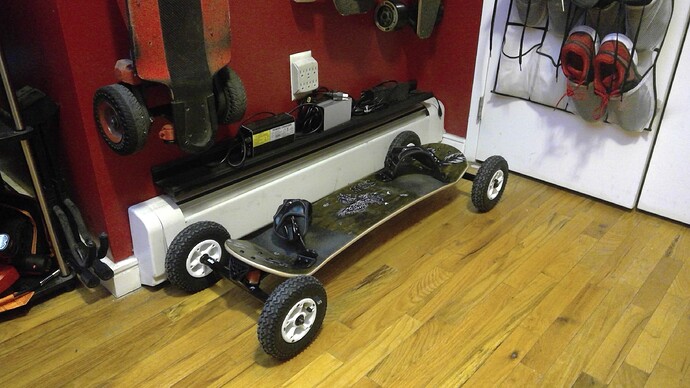 I am wondering if you have had any issues with the plastic trucks on this board. I just watched a video where a guy snapped them. https://www.youtube.com/watch?v=gzbokRtZcEk

Haven’t had any problems yet, but I’m fully expecting it to fail eventually. At that point I’ll switch to the metal baseplate, and order other stuff off MBS to reach the free shipping threshold.

how long have you had them for?

A little over a month. Not as much riding as I’d like due to the weather, but got a lot of practice hopping around on the board in the yard. Totally see why heelstraps are nice, and looking forward to get some in the future.