Hello! I’m not sure this is the right place for this, so sorry if I was supposed to post it in a different category.

My diy build that I’ve had for a while has been great, but a major problem I’ve been having is that the belts seem to snapp VERY quickly. I’ve had 3 belts snap over the past year or so, and I haven’t been riding the board that much at all. I recently just swapped a belt only to have it snap 14 miles later, (according to my devega) and 41 miles before that, the previous belrs snapped too. I just ride and then at the end of the ride look down to a missing belt.

I’ve looked at some posts that say to keep the belts slightly loose, so I have tried to keep them as loose as possible without the belt skipping durring heavy breaking. I also added a pulley on the mounts, but I’m not sure if that lengthened or shortened the belts lifespan.

Any idea why this keeps happening? Any help would be appreciated. Here are some pics of the mounts and pulleys: 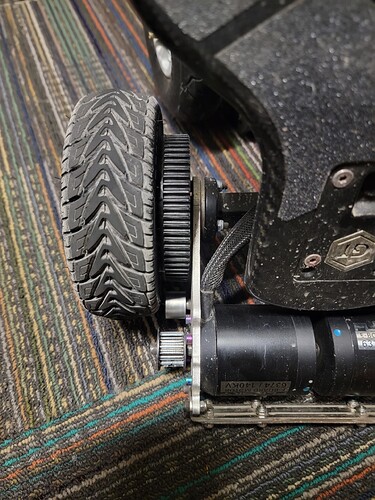 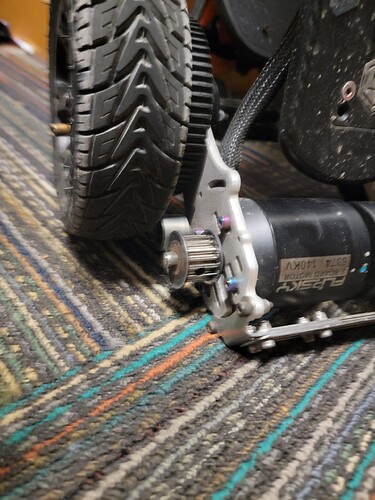 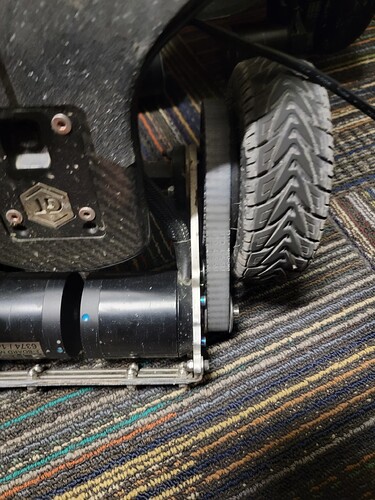 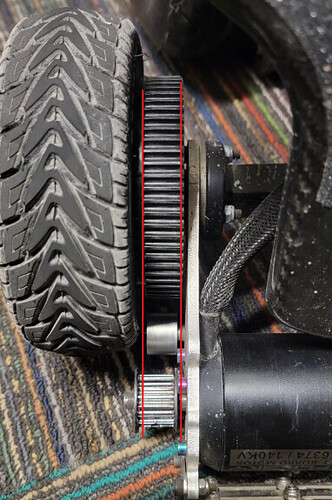 It looks to me like you might have some misalignment between the motor and wheel pullies which could be the cause of this.

In this one i think I can see the belt coming off the wheel pulley at an angle. 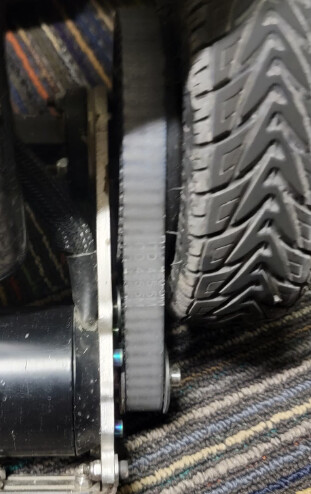 check the alignment very carefully. A belt that’s not aligned well can slip, as @taz mentioned.

Something else that can cause anywhere from minor to massive slipping in a perfectly aligned and tensioned belt, is broken cords. If your belt has broken cords inside, you will typically not see any indication of this by inspecting it (sometimes you can though) but it will just skip like crazy. In that case, failure is imminent anyway and you need to replace it before many more rides. If you check multiple belts, some new, and the skipping persists…

And also make sure your pulleys are concentric and don’t wobble at all as @taz mentioned. That’s super important.

Also belts that are slightly misaligned, as these appear to be, can put massive stress on the outermost (or innermost) cord which breaks it eventually. Then breaks the second cord. Then the third. Eventually the belt is just rubber with all the glass cords inside broken and it can pull apart with ease.

Are there straggly bits hanging out of the break?

In addition, cheap China belts are crap. I bought 4x Gates HTD5M belts like a year and a half ago and never had a reason to replace the first pair I installed. With high tension and 60+ amps going through 63100 motors.

I’m getting thousands of km on china belts, german-made trampa belt broke on the second ride

It’s an alignment issue. Literally. Those belts are way out.
Bet it happens more one side than the other too.

I’m getting thousands of km on china belts, german-made trampa belt broke on the second ride

Yup. Bought German ones which broke quite easily. Then bought china belts and they were solid.

If you are using an idler, then you can roll on fairly loose belts. Like, resting a 608 bearing on belt will cause it to sag. And that would be ok.

If you get skips on the belt and pulleys, then maybe too loose.

Lateral alignment matters too, but you don’t have an inner retaining lip on the wheel pulley. It will just walk off a little bit. I can seen the outer lip is probably constraining the belts path and noted in posts above.

The way i see it ; you can get a very easy adjustment on that top crossbar ? (between the motormounts)

When you look at your misalignment both of those motors need to “come in” a little…
This can very nicely be done by undoing those bar-bolts and pulling the motormounts in a mm or 2 … start with one mm, pull in and tighten.

Easy peasy fix (with that nice adjustable bar) , them belts are way out right now , indeed…

You likely have three problems here.

-The first one is very obvious, like everyone pointed out, your parallel alignment is WAY off. This is an easy fix.

-Second your angular alignment is most likely off as well.

image1140×260 21.8 KB
(The image on the left is parallel, right, is angular.)
This one is often harder to fix. I have messed with dozens of cast hangers like you are using, and none of them had an axel that was perpendicular to the face that the motor mount mounts to, which will cause some angular misalignment. However, in your situation, you can probably minimize this using that adjustable cross bar.
10 Likes
ZachTetra September 8, 2022, 2:09pm #11

Germany is just really bad with plastics I think, all of the plastic and rubber in my BMW and my friend’s Audi just disintegrates lol

I recently had to fix a slight angular misalignment on a mount that I can’t get to budge at all. It is possible to fix the issue by adding a washer or any other form of spacer between the motor and the motor mount. 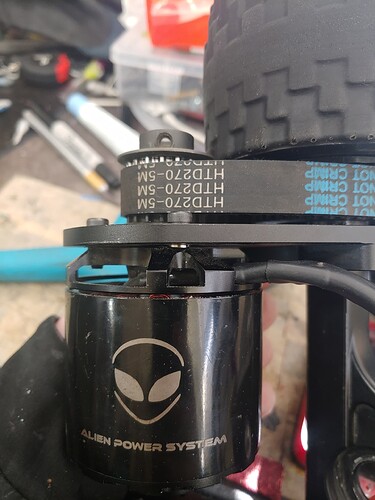 Before the belt had some walking issues but only in one direction, and with no way to be able to adjust the motor mount, this was the solution I eventually found. I did have to sand away some material from the mount under the motor pulley so it wasn’t slightly rubbing against the metal.

Figured this fix was worth mentioning as a more minor adjustment option to use after the steps you listed.

My Gates belts weren’t German, I believe they were either Mexico or Canada made. Quality wise the rubber was far better than the cheap Chinese options. that said, I was running an 11:72 ratio without an idler. China belts lasted a few months before tearing diagonally, (I assume at the point where the fibers overlap at the ends) Gates lasted well over a year, had rocks forced through the middle of the belt, and kept going. I’d still run them if I hadn’t upgraded to a Moon gear drive.