I have a Backfire Zealot that I used as my first board, and still keep around as my backup/guest board. I keep it charged around 50-70% when not using it, however I have had it at my workplace to go out for lunch time skate trips so it hasn’t been sitting unused for very long periods of time. Never had any real issues with it - the only hiccup I had was when I went out for a cruise and grossly overestimated the potential range on it and rode it until it was dead. This was back around April this year, but after that I used it a fair amount of times without any strange characteristics.

Anyways, fast forward to today - I was letting my brother in law use it for a ride because his board is dead right now. Had it on the charger last night, all seemed normal as far as I knew until we got to our spot today and it would not turn on. Remote turned on fine, but no life from the board. There was an outlet nearby and I brought the charger so I plugged it in and it would power on while plugged in. Battery showed full but that was because the charger was connected I believe. When giving it throttle it would get to 5-6mph and then cut out/die. We left it on the charger for 15~ mins to see if we could get any life out of it off the charger, to no avail. I did some quick reading and from what I gather it sounds like the battery is not delivering any juice to the ESC either because of a bad BMS or the battery was discharged too low and can’t maintain a charge anymore.

Whatever it is, I want to try and test it just to find out. I pulled it out of the board tonight and took the shrink wrap off to get a look at it. I’ve got a multimeter. Is there anything I can do to test this? I’m sure it’s probably toast, but I am curious anyways.

TL;DR - Zealot was DOA when trying to power on by itself, but turns on with charger plugged in. Dies with throttle. Took battery out and want to test - how? 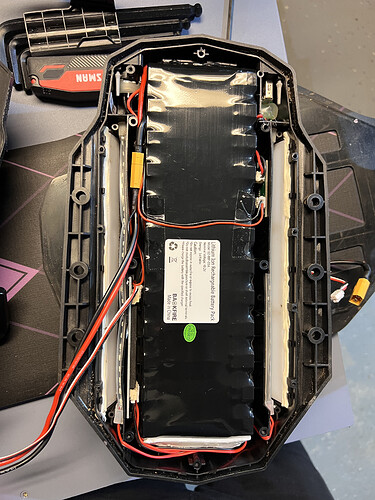 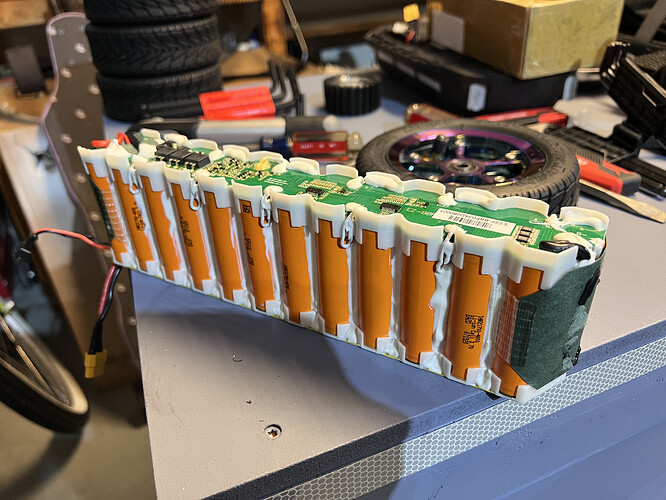 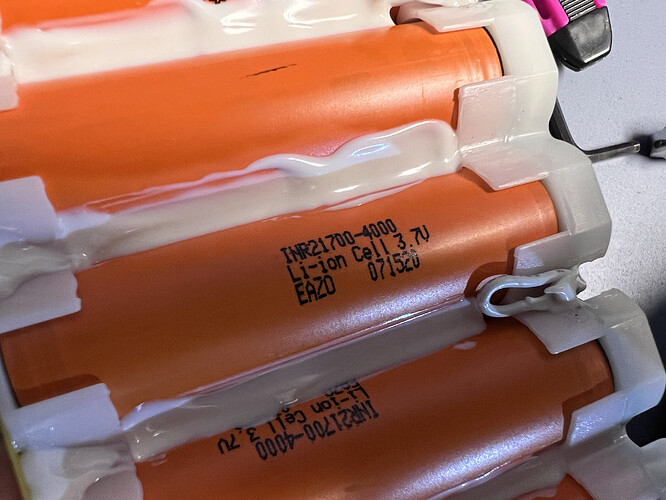 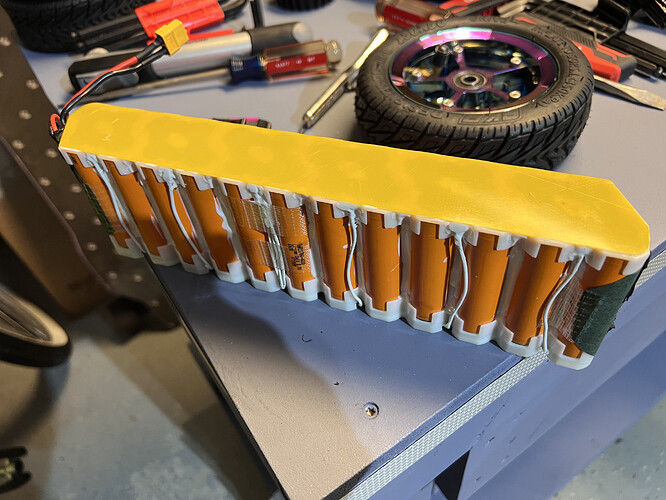 This is super common on zealots. your battery is toast. Generally this is a bms failure or the pack is super out of balance bc of a dead cell.

This BMS is wired for discharge, I recently encountered a pack with the same issues. Check for damage around this area. 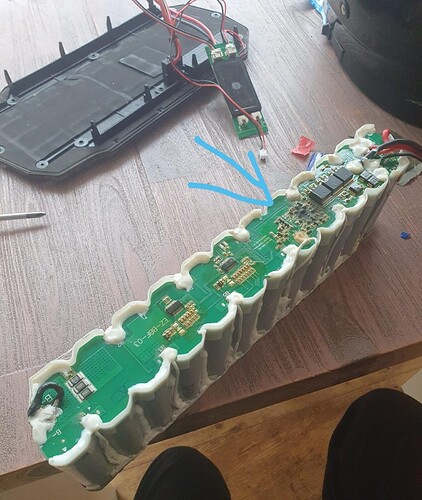 If nothing is visually damaged, manually check the cells with a multimeter.
If the cells are good, backfire can send you a new bms for 50$. A bypassed daly might be a better option though.

Yeah, I’m not real upset that it’s dead as I figured it would go eventually… I’m just curious and want to poke at it to see where the failure was if possible. Is it possible to build a new 12s2p 21700 pack and have it work with the existing ESC etc? Whether it’s worth the time and effort is a whole other question (answer is no, honestly) but wasn’t sure if it was possible.

How do I go about testing each cell with the big goofy PCB board on top? I don’t see any visible damage on the board where you mentioned.

There are balance tabs under the “glue” on the pcb, you should be able to measure those if you take it off. Its the white stuff on the pcb where its says B1, B2, B3 etc.

Don’t know how I didn’t see this at first but yes there does appear to be one “glue” spot that is yellowed near group 7. I see it’s the same in your photo. Is that the damage you were referring to? 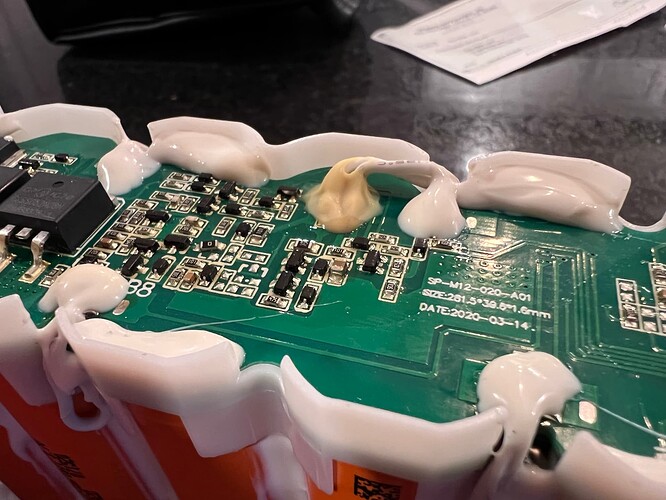 Not specifically, if you look at my picture the entire balance circuitry has burned up. But the same “glue” spot is also yellowish now that I look at it.

IMHO that looks too evenly tinted to be heat damage (which would probably concentrate any color change near the pcb).

Is the hardness of the beige/tan goop the same as the white goop? If not they might be different materials to provide different degrees of flex, anchoring, and/or insulation.

yeah the esc isnt the issue. the problem is space You cant reuse that bms since its the issue, and its really hard to fit anything else in there. I’m personally just gonna buy another battery since its not worth the hassle

I don’t see any visible damage on the board where you mentioned.

Where I have circled in red, is there any yellowing of the white silkscreen lines on the pcb? It’s hard to be sure but it looks like there might be some yellowing there. That would indicate components that got wayyyyy too hot (for those types of components). 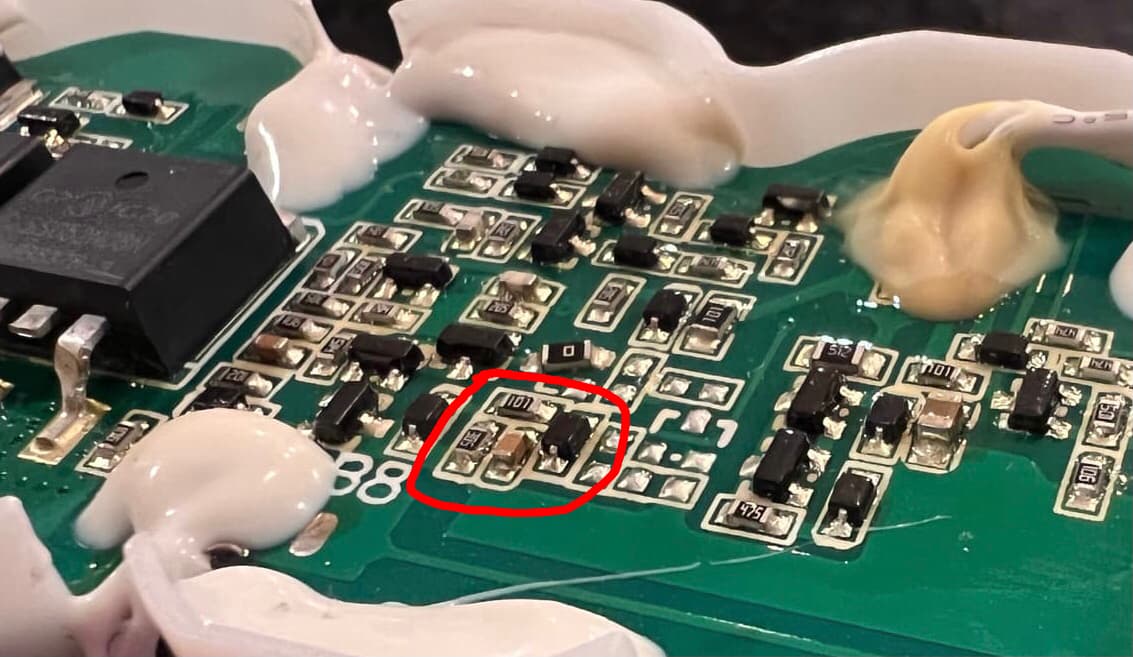 Not from what I can see - the silkscreen looks white in person (same as the rest of the board). That yellow goop must be a different material because it is hard compared to the other white goop which is soft (like silicone). 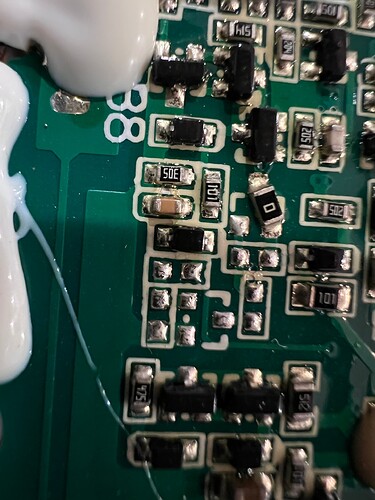 There’s a closeup of that particular spot.

Apologize if I measured this totally incorrectly - please bear with me

I measured across the XT60 for pack voltage and then I kept my black lead on the negative on the XT60 and measured across the balance tabs on top of the PCB. The voltages added up as I went along obviously, but a few stood out as strange (B1, B2, B12). My readings could be totally off if I’m not measuring correctly so please critique and let me know. 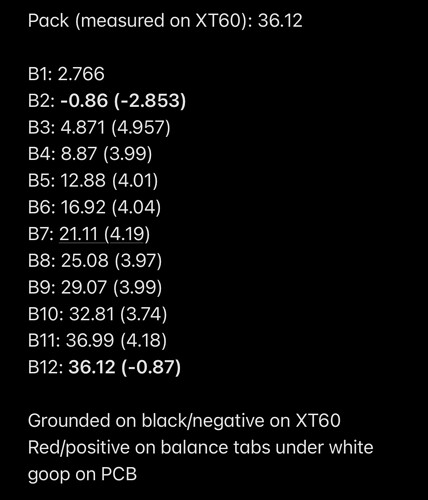 When I measure red/positive of XT60 and the black/ground wire by B1 at the end of the pack I get 43.83. No idea if this is relevant or not.

Could you measure again but from balance tab to balance tab? ie B- to B1, B1 to B2 and so forth.

Wow this pack is fucked

Edit: what I thought was B12 before was B+ in disguise (my inexperience not helping either)

That’s what I like to hear! If it’s gonna be broke I hope it’s REAL broke

Most groups seem to be right around 4.1V but the fact that you have two groups very low and two groups very much above full makes me think this pack is fucked.
I’m wondering if the high groups maybe had a weld come loose and/or the low groups have bad cells.
Anyways it doesnt seem worth to fix this pack and you might be better of getting a 12s2p pack built by someone reputable.

Agreed, those #’s were throwing me off a bit too. I’ll ask around on a build for it. Thanks!