Accidentally tried to launch my board to the moon...

I’ve seen a little to very little on this topic. Stormcore 60d+ with a Trampa wand experiences runaway command entry during a control disconnect. Scary.

Do I need to add a loopkey style emergency disconnect whith this particular setup? (similar to a jetski or something with a tether or Oh S*** handle? Did I miss a vesc setting that could have prevented the runaway?

I unwittingly discovered this small problem that last input during a disconnect = continued action by the Stormcore which launched my board 8-10feet into the air and maybe 20 feet distance.

What I did:
The Stormcore 60d+ and Trampa wand combo (out of range maybe 20ft away?) I throttled the controller and hit the brake but it kept accelerating. Since I was testing it near the neighborhood vacant lot, it jumped the curb accelerated at maybe 3/4 to full throttle, clipped a rock which launched it into the air impressively high while still trying to accelerate. On landing my battery broke free of the mounts and came free of the power cable which luckily stopped the board from continuing. My battery is fine since it’s housed in a pelican case.

I had previously rode it around everything was working well. Tightened up my trucks to get more stability anf started pushing a little harder and trying hills and off pavement. Still good. Even after the crash other than 2 battery mounts everything was fine and it rode home.

This could have been quite the catastrophic experience. I’m probably going to anyway… but, definately a bit hesitant to ride more without coming to a solution for this.

U know what’s the issue in this build?

No wait, actually it’s ur body, there are too many dihydrogen monoxide molecules in ur body, so it interfere with the radio signal

While I have nothing specific to offer on this, the disconnect / reconnect issue is the #1 reason I always wear a helmet when riding. I’d say 50% of guys I see riding don’t have helmets. That’s fine, until they experience something similar to what you went through… back of the head and shoulders are the first to hit the ground. Don’t need to be going 40 mph either.

I had a Mayech ( MTSKR2005WF) acceleration trigger spring snap about 2 months ago. The trigger just went 100% since no resistance and just dumped me on my ass. Ego more bruised than anything, but I thought it was funny. Luckily I was on loose gravel and the board mostly went in a wide circle until I was able to keep the trigger fully depressed and then shut it off.

Honestly, the remote had it’s issues to begin with and I should have replaced it immediately. It has shit parts in it though, which is quite unfortunate. I love that dual trigger config.

Is there a wiki or anything that tracks specific issues, dangerous combinations of certain parts, etc.?

No wait, actually it’s ur body, there are too many dihydrogen monoxide molecules in ur body, so it interfere with the radio signal

Where can we get checked for this?

We should outlaw this stuff!

Needs more more hydroxyls attached to alkyl carbons to drive the water out.

We’re wearing full gear on these things for sure. Helmets, chest/back plates, and major joint pads. For street/dirt bikes.

Today when this went down, after my neighbor and I watched it’s flight trajectory somewhat in awe. One of the things I thought about is the risk of the board causing harm if it goes into powered runaway situation ever again. Wether its to another person or property damage.

If it just a thing that can happen for the board or electronics combo to make an uncontrolled acceleration in the case of a controller cut out, reception loss or sneeze induced shart… I would feel a heck of a lot better having a main power cable kill/interrupt swich tethered to the rider where it could be pulled if needed and would also get pulled in the case of a emergency dismount.

Cutting power appeared to be the only thing allowing the board to roll to a stop rather than than an uncontrolled continuation what the last command input recieved was.

Need to devise safety cut off…

two things with the trampa wand if the potentiometer is worn it will full throttle randomly and you have to the use the external antenna receiver other wise it’ll cut out on you.

Use a remote with a failsafe setting, and stop worrying.

Bummer as I now search the proper terms on builders forum and am seeing the results… was hoping to keep the wands because I really like the telemetry features and didn’t want to spend the $$$ to get new controllers and davegas running to have it.

@Pickled_Monkey they are fresh outta the box wands using the GIANT external antenna. 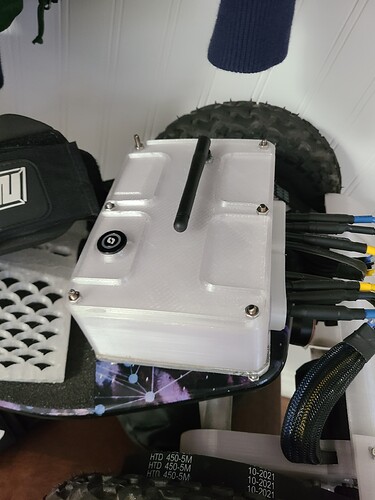