When the current at two duty cycles is measured, I forgot to multiply by Kt, the torque per amp constant of the motor, so the graphs above actually were representing phase current vs rpm, not torque vs rpm, this is how it should look, way lower core losses all across the rpm band 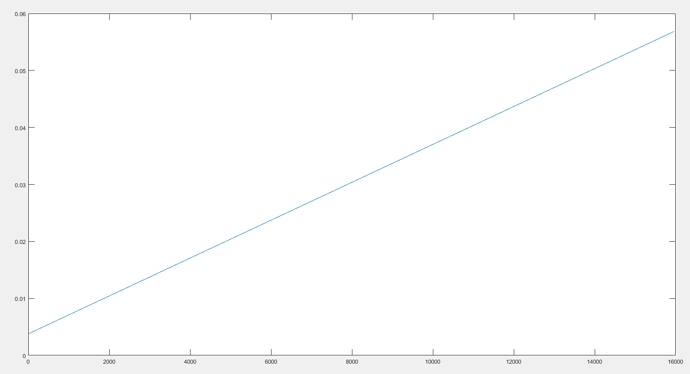 Will fix all motor plots as soon as possible

I get the logic behind voltage constant, but what’s the math to extract torque constant from the VESC measurements?

You get the torque constant directly from the Kv, they are inversely proportional

Wow, that’s an interesting relationship. Thanks! Blows my mind how much we can learn from these motors with just a few simple tests.

The only thing you can’t do i think that a lower Kv will produce more torque, it won’t, two equal motors, having the only difference being the Kv, can produce exactly the same torque

Quick run down on what the hell motor parameters mean during detection, and how you can use them to help in your calculations Resistance: The line to neutral (from ESC terminal to center tap of motor windings) resistance of each phase of the motor. This determines how much heat per ampere is dissipated inside the motor. The equation is approximately: For FOC: [image] For BLDC it’s : [image] Where I is motor current, R is phase resistance. This does not include things like bearing losses, …

I talked a bit with @Gamer43 and I’m putting on hold the measurements you guys can do until we validate what is going on, big chance that the current measurements at low levels from the VESC are really noisy, specially at the duty cycle extremes

Unfortunately I don’t have the equipment to validate externally, so will have to figure something out

The numbers for now sound too good to be true, 96% efficiency over a big torque and rpm area

Some new tests, I run the same motor at three battery voltages, 4S, 10S and 16S and took notes on the phase current readings in 10% duty cycle steps to see if any point deviates when you are on the extremes of the duty cycle, turns out they all deviate.

Spinning at 180 Kv motor at 16S is a bit frightening, I considered trying 20S since in theory the 100D can take without regen, but the motor might have exploded or got too hot just from core losses

@Deodand was kind enough to explain, correct me if I got wrong. Basically there is two problems, first we are measuring a really small % of the total current measurement capability, so the accuracy can/will be low, and on top of that deadtime compensation further skews the results, to a lesser effect the higher the duty cycle is.

In other words, none of the results presented here are valid

Next step is to measure the phase current externally, see how it compares and how the deviation influences the overall theoretical performance graphs, if the effects is low, lets go ahead, everyone measure there’re motors and we keep in mind that there is a high degree of inaccuracy in the results, but can be useful for a relative comparison between motors

Unfortunately this will mean that we will have to exclude any ESC that has a notoriously noisy current reading (Hi FlipSky), but I have a FSESC MINI4.20 here and will try that

Ideally I should permute all motors and all ESCs I have here, lot of work 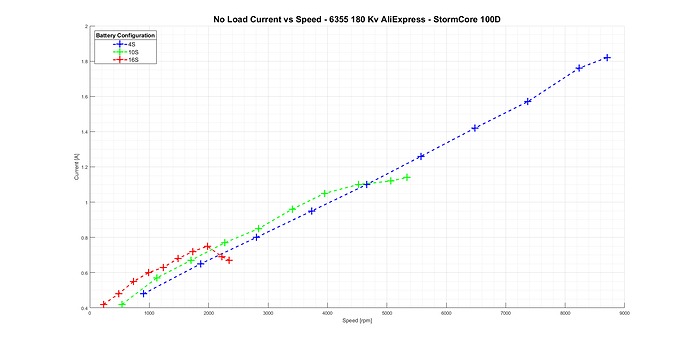 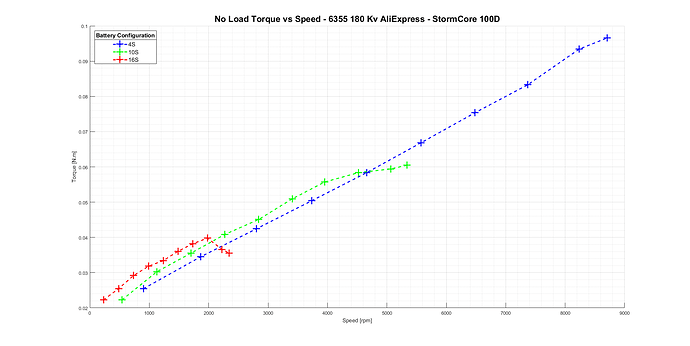 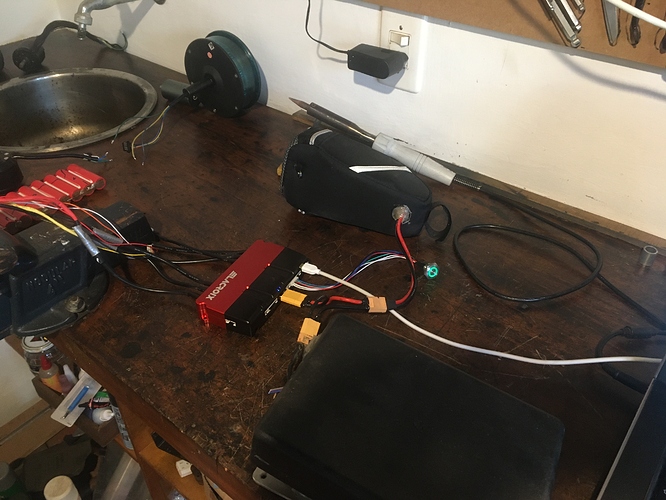 Here are the differences between the performance with the 4S and 16S measurements, not that big, and certainly usable if the overall current reading is good

Also I’m suspecting this motor I’m using for the tests have a Kv of around 160 instead of the 180 its sold as, will see if I can test it 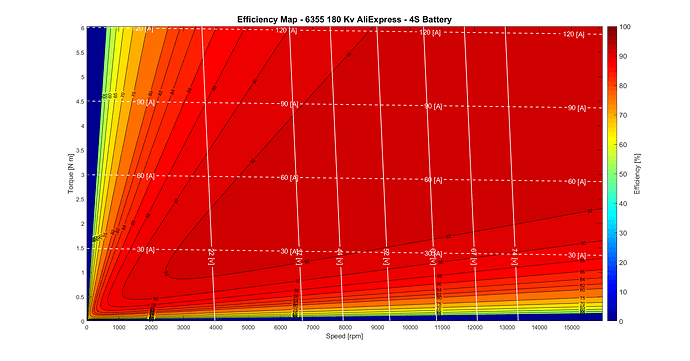 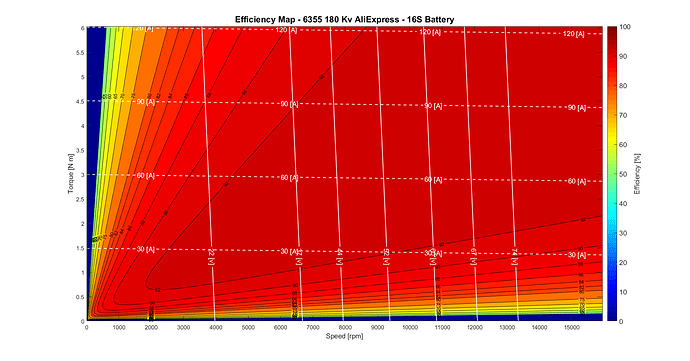 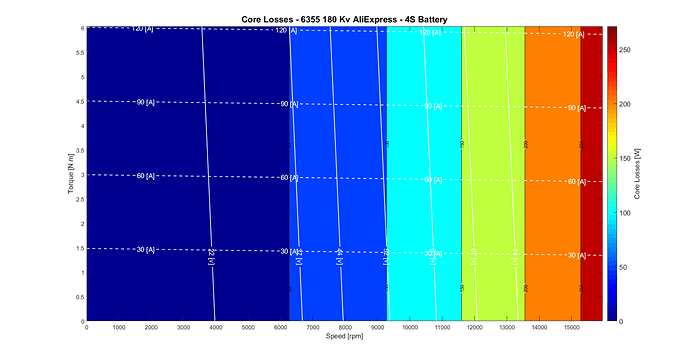 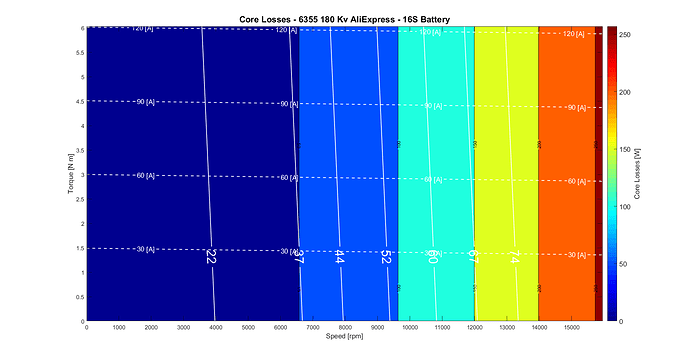 I had similar weird current results at different duty cycle (would drop at 95%) and asked on endles-sphere and was also told it’s not accurate. Is there other data logged that could be used to figure a more accurate current draw such as watthours or amp hours and keeping other things consistent?
But with the iron losses being pretty small anyway how about just comparing the km? I think the vesc is accurate enough for that no?

With that and the ERPM you can calculate motor power and motor torque, and from that calculate all the rest

This is how the folks from ebike.ca do, don’t know when, but I want to test all of that one day

Why would the core losses be lower at the same rpm but with higher voltage as this graph shows?

These graphs aren’t actually showing that they are lower, but what effect the measurements error due to different voltages has on the efficiency plot

They should, and probably are the same , unless there is a big difference is efficient due to different duty cycles on the controller

i have checked all my settings 10 times over and just cant figure this out.

The real reason is just because motors kV varies between batches depending on exact number and quality of windings, often you’ll find that 190kV motors are on the lower side and actually come in at 180 something.

That makes sense, I will look for that in the VT tonight. I will be curious to see if that is the culprit.

I’m guessing one is high or low

Did this ever get resolved? Or are the tests good enough for comparing motors, as long as they’re done on the same hardware? I was planning on doing some tests on a Trampa Vesc 6mk3, but I could do them on my 100D if that’s what you’ve been using until now… Only got a 12s battery at the moment though.