so i’ve been having some problems with the vesc on the can port, if i try to connect to it via the the canbus in the vesc tool app on android and try to change some settings it just stops responding, after that i cant get a response from it unless i restart the board, i absolutely have no idea whats wrong, all the connections are fine (or at least they’re fully plugged in), both vescs are on 4.01 and the metr dongle is at 4.19 so everything is up to date

the weird thing is that the board works fine when i ride it, what could be the problem ? 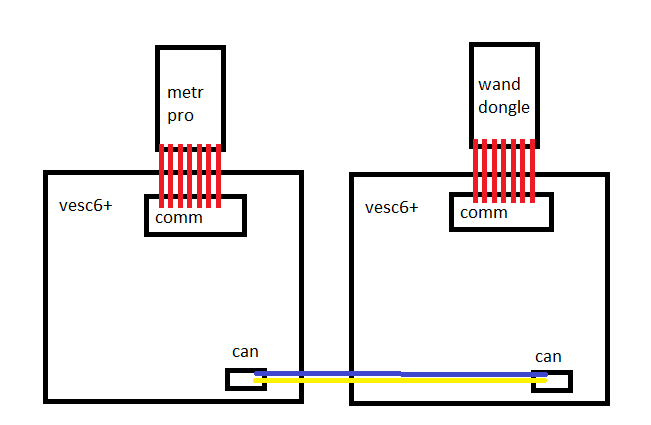 the one on the left

Did you put scan canbus when you conect to the master vesc? if you did that you just have to click on the box of the slave vesc, and you will get into the slave, to go back to the master, just click on the same box to disconect from the slave.

I did the AFI with USB , if you change BLDC or FOC settings same happen? I would try downloading again the FW. You could ask @Trampa also, they are very helpfull…

I would try to disconnect the metr dongle and see what happens. Scan CAN-Bus, activate Can Forward and try to change a thing and write the config. Then go back to the master, go back to the slave via CAN and see if the setting is changed.

Worst case: SWD prog the salve to be sure that the Firmware is 100% OK.

I managed to solve this issue, im not sure what it was though

Reuploaded firmware to the vesc that was troublesome, did not restore the settings, configged everything manually, did not turn on traction control and turned it off on the other vesc, redid the motor calibration wizard and voila, everything works again
I suspect it has something to do with the traction control being enabled on both vescs but im not sure
@Trampa what do you think ?

One thing that i noticed was that the hall sensor on both motors suddenly worked again, Both of them had stopped registering before, just thought that i had strained the board too much or something