Next I’d like to hear from others making ESCs like neoBox and SoundCore. I also want to hear from the former Enertion staff who has the expertise to make the Unity and what they are doing now. As we get closer to the summer riding season a lot of people are going to be building boards and we need to know what our options are going to be. Could you come up with interviews to answer these questions?

Absolutely, I would love to interview key players in the DIY scene. My channel is pretty much focused on DIY esk8 so this would be a great fit

The dream would be to get all of the people with the expertise together (Boosted, Enertion, Inboards) with some funding and form a new company and brand. I hope they don’t leave the esk8 space and go off into something else. This market is just starting.

former Enertion staff who has the expertise to make the Unity and what they are doing now.

Where can I read more about it?

Hey peeps, last time I did this was close to 2 years ago day for day on a now defunct builders forum hosted by a company that no longer exists so this is making me realize that lots of things have happened since then in the commercial space, but the hardcore riders making awesome stuff are still alive and well. You just all came here

In that time, we built a board on which some dude did 83 miles on a single charge, my brother left the company, we designed our own trucks, we shipped to 1…

Wow. The response to question about ripping off enertionUSA by logging in to Amazon and switching account numbers. “Uh I dont know about that uh” yeah thats smells like a fat pile of bullshit to me. Suspect.

Yeah he did it. If that’s no clear to people then I fear for our future.

He was desperate, he knew his company was going to liquidate, he assumed there would be no legal repercussions as it was limited liability and no sane person prosecutes over the sea.

Where is the background on this, trying to understand how that works and why never heard about it

These interviews and posts are exactly what I expected from Jason - lies.
It’s infuriating that last week I told him the right thing to do would be to own up to his mistakes and to correct them. What he’s doing now might look like that but it’s more like he’s running publicity campaign that’s complete BS.

I may not have been around to watch the community and Enertion grow but I do have more of an understanding about who Jason really is than most as I spent 2 months working side by side with Jason at his home in Brisbane.

I first reached out to Jason in August 2018 and expressed my interested in investing in the company after seeing the Raptor. I met with Jason at his property on the Gold Coast and chatted for a while before he eventually denied my interest in investing because he didn’t need it. Months later we got chatting again and he asked me to come onboard to help prepare for the summer season and help expand the business. After 2 months I had to stop volunteering my time with Jason as I had other work commitments, but Jason reached out again soon after and offered me US distribution. I took this deal because I thought it may be a chance to take what’s right about the company and to separate what’s wrong (Jason). My approach was to start with the Unity as it had few issues and not to take on more risk than I could afford to lose. Jason immediately started to break his end of the deal with delays and going back on his deal to allow me to produce the wheels in the US so I decided to not continue working with him shortly after I received my first order.

Jason only worked 4-5 hours per day from the comfort of his home office and spent most of his day venting his frustration on his contractors, no wonder they all started to walk after he stopped paying them. Jason is a stay at home Dad and I can respect that but as a business owner he just wasn’t dedicated or even close. He could have still worked late at night but he didn’t, he is the most complacent business owner I’ve come across. Jason outsourced absolutely everything and expected everyone to work in harmony with minimal input from himself. He couldn’t understand why systems were failing and people were letting him down or even worse was when he couldn’t even see that things were failing such as his financials. Jason’s never had much of a real job, and probably struggles to see the reality of the situation because it’s been such an isolated project out of his garage.

After I announced that I would no longer be selling the FOCBOX on Amazon, Jason immediately removed my access to the Enertion Slack chat and closed my enertion.com email. The Amazon account that I used to sell the Unitys was shared with Jason, he took over the account, denied me access and took possession of $14,600 in cash and stock. He changed the bank account to his own and eventually sent me $10,000 but still owes me $4,600. I’m somewhat fortunate because I have evidence of criminal activity and have been able to get the police involved so he’s likely to be charged with fraud soon.

Jason told me in December that he was going to create a new company and sell the IP from Enertion to the new company so when he has to wind up Enertion there would be no value in the company and that he would still be in possession of the IP. His properties at Stafford & Molendinar in QLD are both in his wife’s name, I believe they have another in Adelaide and possibly NSW but I haven’t looked into them yet. There is zero value in his molds in China and there is zero stock in china, only debt. There is zero value anywhere in the business and I don’t expect anyone to get money back but if you’re owed money you should definitely still contact Cheifley Advisory.

When Jason said he poured his life savings and borrowed family money to put into the business it’s all BS, as far as I know he didn’t end up taking the family money and he paid himself back any money he put into the business. I call BS on almost everything line that’s coming out of his mouth at the moment. I cannot believe that Jason is still not accepting full responsibility for everything and trying to correct his actions. For those that are not in Australia, note that I will doing all I can here in Australia to bring him to justice.

I’m sorry for all that you have had to go through Kurt.

For what it’s worth I think you presented your intentions well from the start, despite the situation being pretty weird for all involved.

Cheers. I hope you get resolution to this.

That’s rough, Kurt. And apologies for all the drama you inherited from Jason when you came on here. His black cloud is tough to shake.

I really hope you get your money back, and thanks for taking him to task and for this update.

sorry that this happened to you ;(

perhaps to get below some kind of legal/criminal threshold?

I’m somewhat fortunate because I have evidence of criminal activity and have been able to get the police involved so he’s likely to be charged with fraud soon.

Please let me know if you need any additional incriminating evidence. He’s been trying to sell the Unity IP behind the Liquidation companies back. I’ve got plenty of proof, I’ll PM you my email.

His name is not even Boston and he’s not from Boston. He said he just likes the name. What is that? I stopped watching his videos. 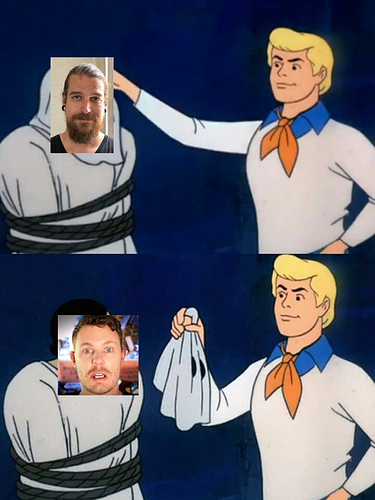 Only because Andrew has no life