The no effs given Mörder Börd

Usually i’m very conservative about showing my builds but i thought this one was worth a post. The board has it’s origins back in the spring of 2019 but at this point i’ve changed everything except the vesc 6’s and my front truck so i’ll just call it a new build.

This is my flagship, my wallet marauder and my soon to be inevitable demise. Therefore i’ve given it the very Swenglish name “Mörder Börd” 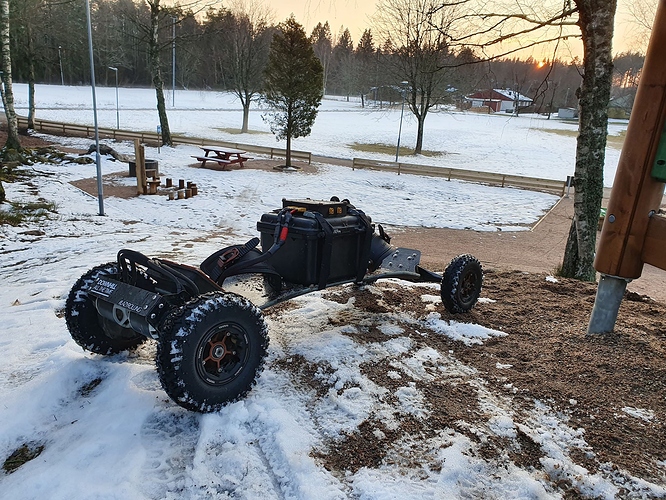 It’s the usuall addiction behaviour that leads to shit like this, you build a killer board with 60km range and dual 6384 motors transferring power through Etoxx gear drives. Then you want to improve top speed without sacrifising torque, in comes 80100 motors which of course, drastically increases power consumption and leads to a deep desire for a bigger battery. Suddenly 200 Samsung 35E cells magically appeared at the front door by a very suspicious mailman. 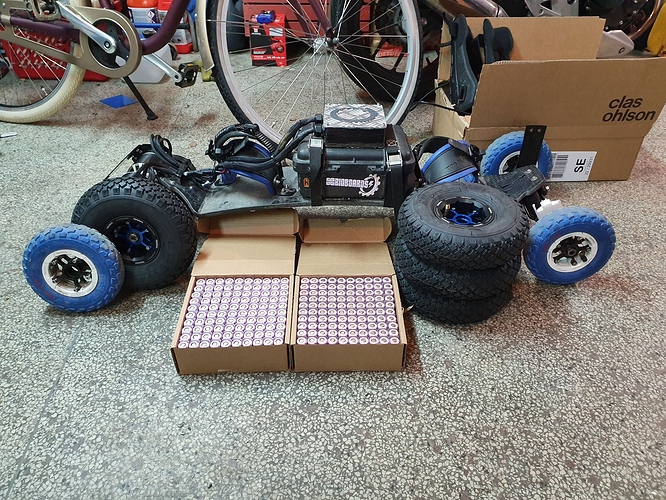 In the dark corner of my basement those cells was forged into packs in the quest to exterminate range anxiety. To be specific 2x 12s8p 35E packs wired in parallel to achieve 12s16p and just under 2,4Kwh. 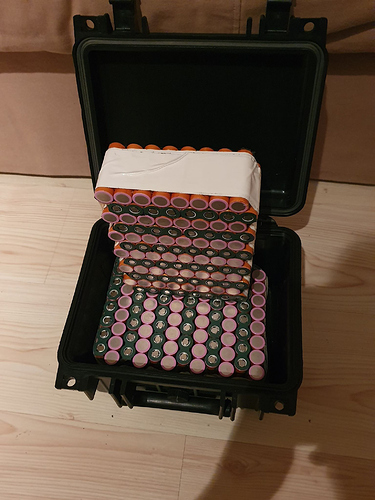 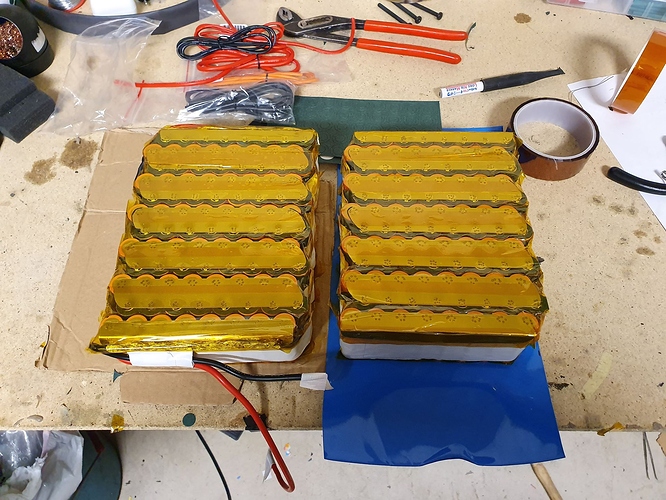 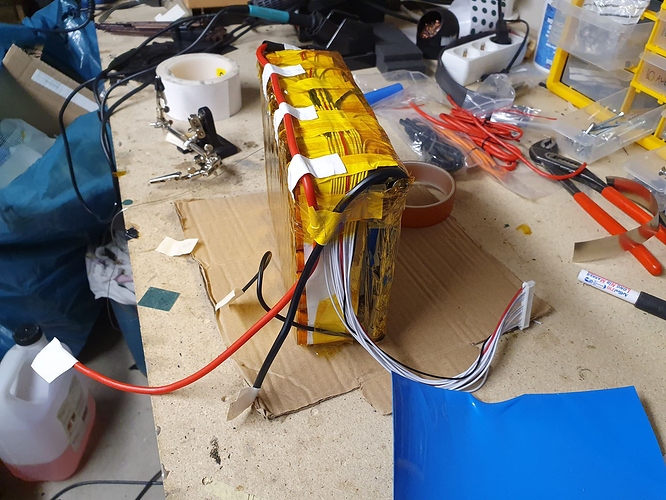 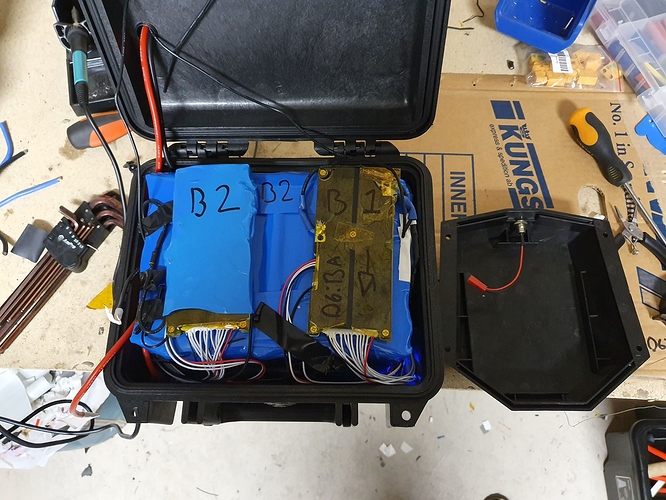 Both packs has individual BMS’s to make them truly seperate from one another, this means i can remove one pack if i’d like. After accepting the fact that those packs took up every lite square inch of the not so small Peli 1300 case i made the decission to do most of the wiring in a smaller box on top of the big one, boxes on boxes. 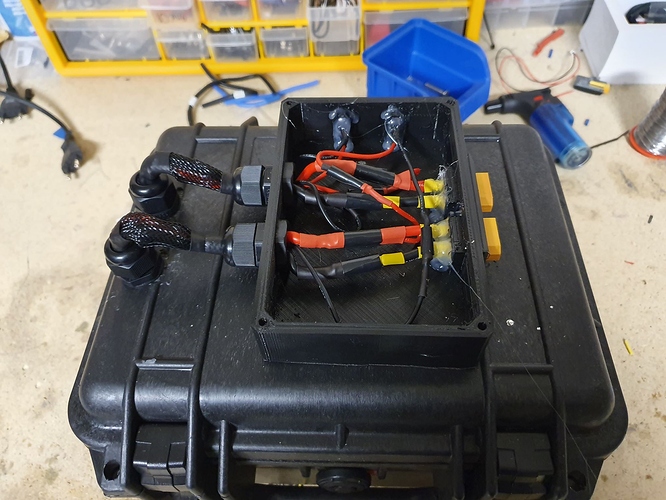 Both packs has their own charge and discharge port wired up into this smaller box, i can from here run them in parallel, or just use one pack at a time if they for example wouldnt have the same voltage. they also have seperate charge ports for individual charging. the parallel connection itself is done ourside of the box where 2 XT90’s meet a pair of AS150 connectors followed by 8 gauge cables to the Vescs.

For the deck i could go with my old HS11 but since i had a Kaly racing deck laying around (Generously donated for a savage cause by the main man Ernesto) i decided to use it. Some would call it a crime to put boxes and bindings on this beautiful craftmanship, if you feel offended by this i want to express my deepest apologies, it’s just the way i’m wired. 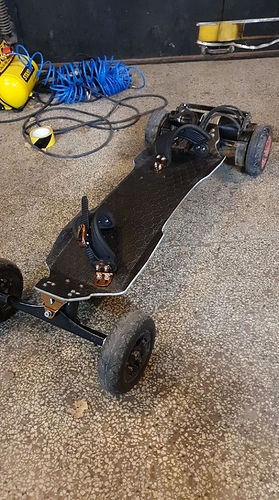 Finding a suitable VESC case is not the easiest task when running 80100 motors with etoxx drives, since the motors are very close to the deck and that are big as a damn beer can. Either the box is to small to host dual vesc 6’s or it’s to big and hits the motors while turning. Luckily the good gentleman @Lee_Wright has an excellent Vesc enclosure design up on Thingiverse (https://www.thingiverse.com/thing:3924745). Although Lee’s design does expose the Vesc heatsinks to open air i wanted to further improve the cooling propertys, I did this by cutting out my own lid from a 1mm aluminium sheet and then put big heatsinks on top of the lid. the vescs, lid and heatsinks are bolted togheter using the vesc’s mounting holes, between it all i put some cooling paste to improve the contact surface. It turned out that this did aswell hit my motors while turning though, but one does’nt so easily give up on a 30 hour print job. So i came up with a simple wedge to put between the enclosure and the deck, everything is bolted togheter using the inner spring position holes on the vertigo baseplate. 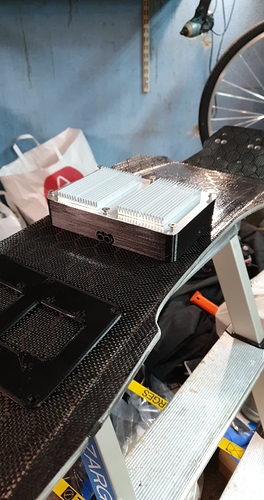 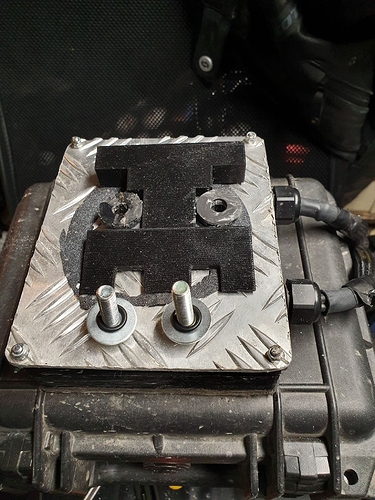 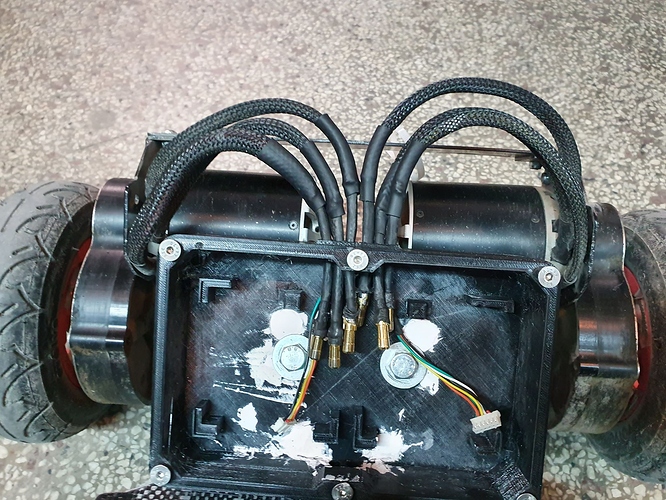 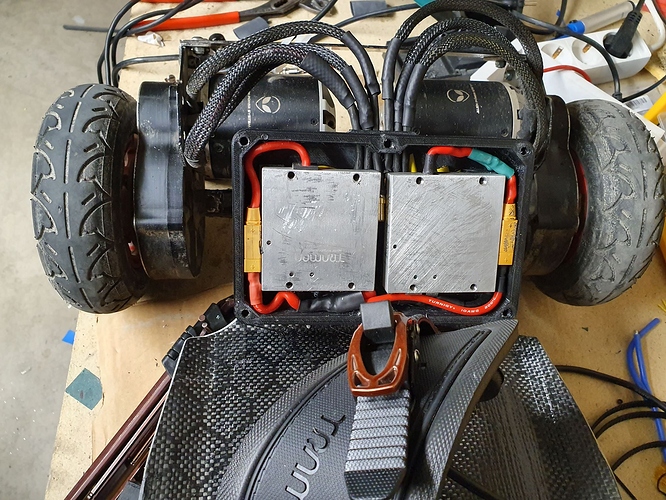 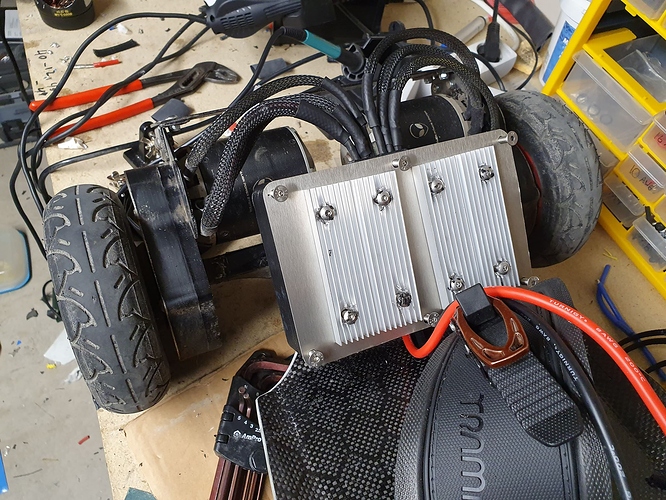 At this point the board was pretty much complete, final touch was to fix the wiring, add a frame with skirts on the Vesc enclosure and spray paint it in the copper/bronze color scheme. I also added 9" mudpluggers on the drive wheels which did an amazing inpact on it’s off-road capabillities.

If you stuck around this long for some reason, thank’s for reading and here you go, the final result (for now). 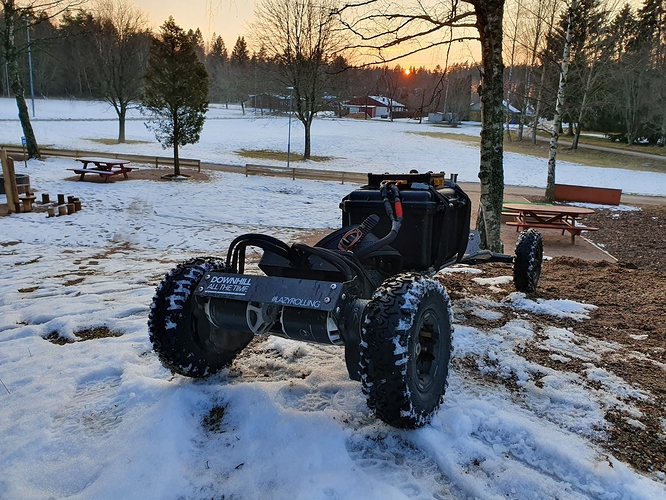 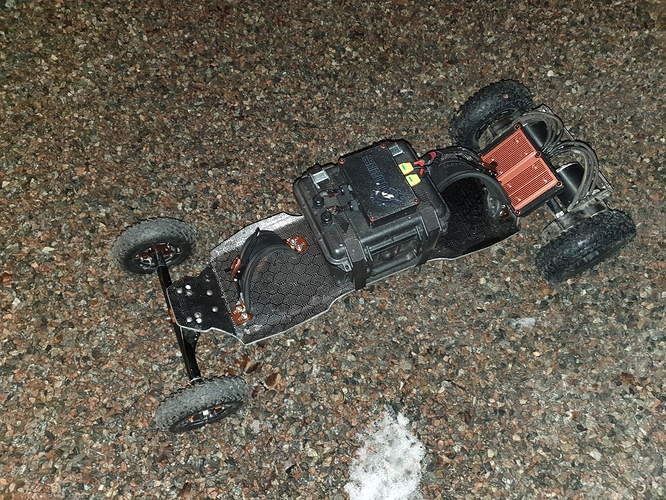 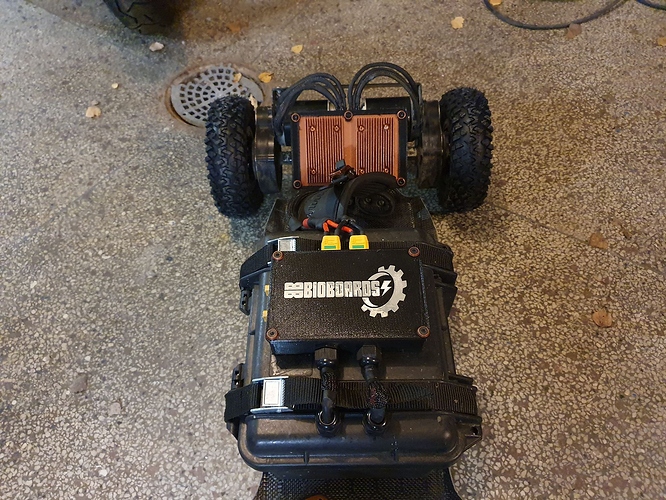 Holy shit, why did you not share it previously! This is a great build my friend

Thank’s man! To answer your question - when i build, i build. taking the time to sit down and write about it sure has it’s charm but the garage is ever calling for my attention

What and awesome looking board. Good job

This is fantastic mate.
How does it ride?

Rides fantastic, especially with the 9" mudpluggers. Was worried that the 13kg battery box would affect the feel of the ride but it doesn’t, feels and carves just as good as with my old 7kg box. Trying to do any kind of jumping is out of the question with this one though!

I would recommend to use 9" also on the front end to improve comfort and safeness, since all obstacles will hit first the front wheels.

Besides that it really looks Mörder!

Thank’s! I may put on some 9" on the front later on, reason i only run them in the back right now is because this is what trampa does themself, i can see why. I can always lift the front end of the board to get over obstacles and since i need the traction on the rear and not the front i figured big tyres in the front would mainly become dead weight on an already very heavy board (28kg)

As seen in one of the pictures i did buy 4x 10" tyres, i tried running them on all four wheels but didnt like it, took away to much torque and lifted the board up way to high

That’s the definition of not giving effs

but it’s one sexy build tho

In awe at the size of this lad. Absolute unit. The bar has been raised, guys. Killer!

That back plate really finishes it off well. Nice build, looks like you’re blasting it too.

I’m glad you guys like the build, needless to say many hours was put into this one to get it right!

Especially surprised that @Brenternet gives positive feedback, that’s a rather rare sight now isn’t it! Your comment is spot on though, the Alu lid with heatsinks really does a lot for the look of the build, and also keeping the vescs cool while running 100A through each one of them, but that’s just a bonus really…

So from the spare parts i had over I was able to restore the original board I made last spring, with a focbox unity instead of vesc 6’s but i guess it’s an okay little guy. 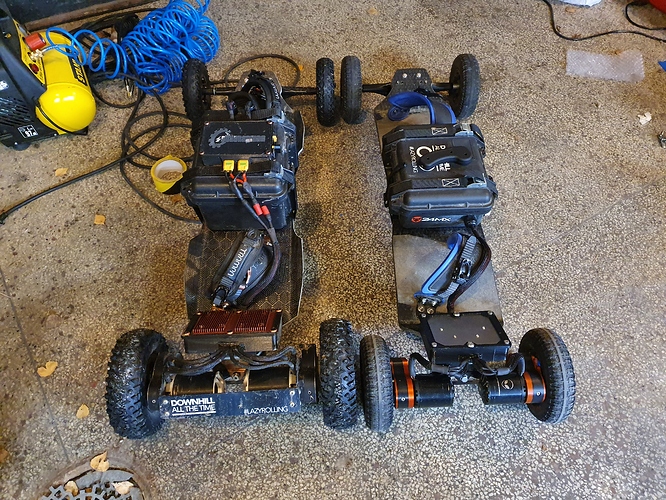 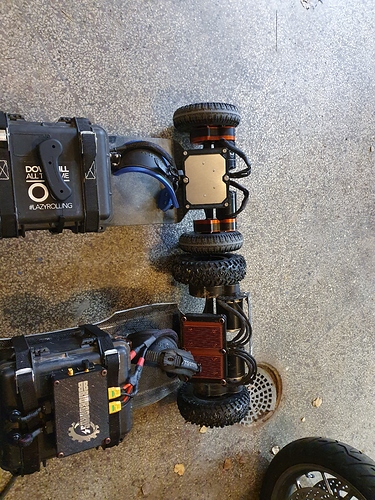 That can compete with the original BMW i3

@Benjo Ima just go ahead and call it a 100km board, with this pack I could do more than that but the 80100 motors and 9" tyres really f#+&s up my consumption. This is why I wanted a ridiculous big pack in the first place, to compensate for that.

If I would slam my old 6384 drive train on here with 8" tyres that had an average consumption of 18wh/km I should see something closer to 2384/18 = 132. Minus some range because the capacity is never exactly as rated but atleast 120km would be the reality

Mind sharing your nickel source of it was good?

Yeah, I know that the 80100 are range killers. But I like the torque more than range

And you have more than enough range as well, I start getting a headache at around 10-15km already because of vibration and shock

Thanks! The nickel is 25 x 0.2mm from Nkon, it’s perfect to use for theese cubic packs since one strip is enough to do both the parallel and series connection for each group. they rarely have this in stock though

It is so sad they stopped serving the US…
Lucky you.