So throughout my entire esk8 “career” I’ve always wanted a binding board that I can do dumb shit off road on. When I was a young blood I loved mountain biking and rocket power exposed me to this awesome looking thing mountain boarding. However, I live in a city and couldn’t justify it as I didn’t think I’d ever use it. LOL Brent your dumb you have at least two boards that get used every other week, but I digress, that was my rational.

I was talking to some bro’s who are into the PEV game and recently got into eBike’s, they had found some sweet hard packed trails behind this major park in my city. I met up with them one day on my lacroix and hit the trails. Wow, just wow, so fun. Couldn’t stop thinking about how now I have a use case for a proper eMTB. I also have a bunch of shit I could use to get it running and just upgrade from there. That’s mainly what this thread will be, progress from my current iteration. On to that.

Current build:
MBS comp 95
F5 bindings
MBS matrix II’s off my OG prototipo love these trucks
8” roadies innovas off my old lacroix set up
Rockstar II’s with 62T gears
Beat to shit 6355 190k’s
Unity
Boardnamics mounts
12t motor pulley’s
Battery is either a 12s3p I borrowed from another build or a 10s5p I had made as a backpack range extender

What’s in the mail for her:
9” trampa mud pluggers
MBS 5 stars
72T pulleys
Pelican case for the unity
F5 heel straps
6384 170kv’s have an option for 200kv too but I think those are going on a “race” inspired board.

What’s undecided:
Final deck, I want a kaly 2.0 for this bish but we’ll see
Final battery, I’m leaning toward a 12s8p 40t but who isn’t
Final battery box, I don’t wana spend an arm and a leg on a trampa box and I still haven’t found a junction box or pelican box I’m 100% in love with but there are some contenders.
I may try my kaly straight cut gears and trampa infinities with barrels on this guy too. Really like that I have a use for these MBS trucks again tho, I’ve done many many miles on them. 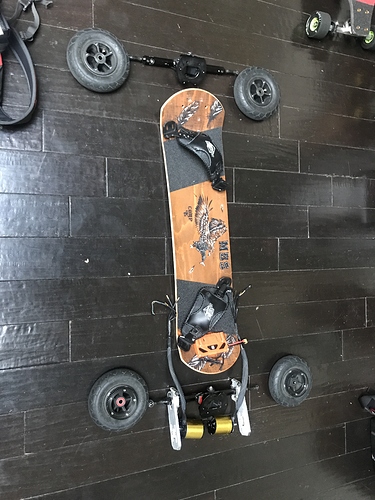 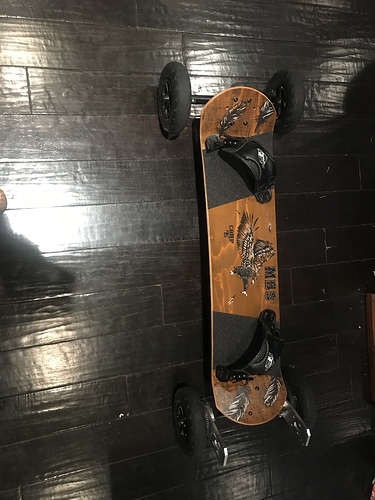 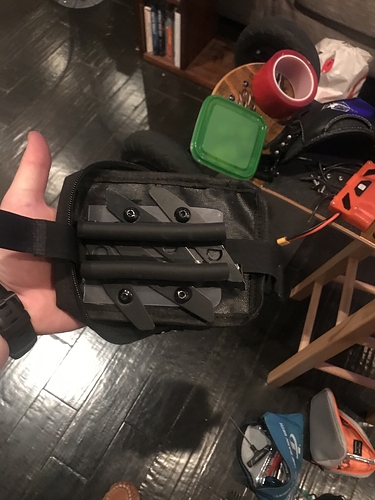 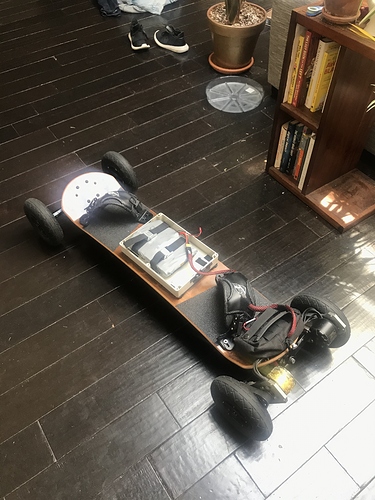 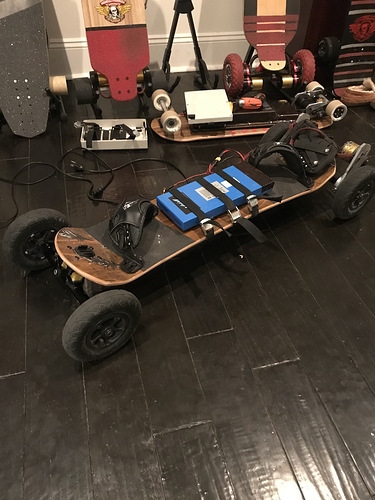 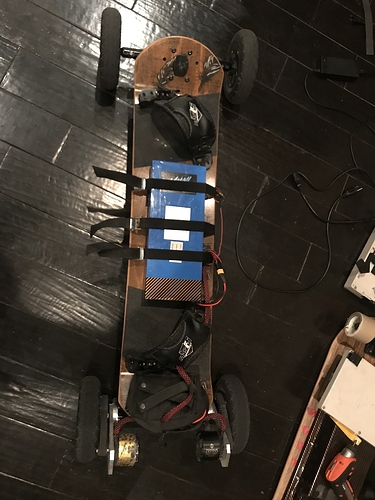 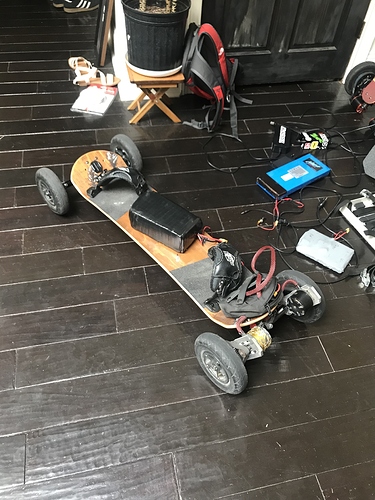 can’t wait to see the progression 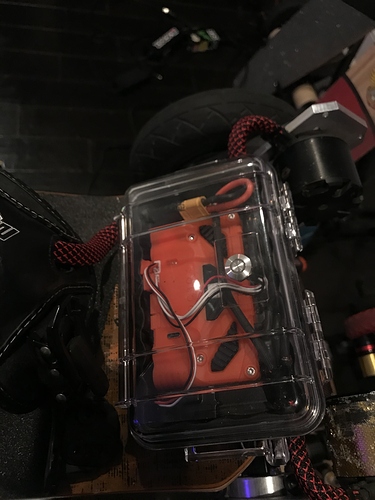 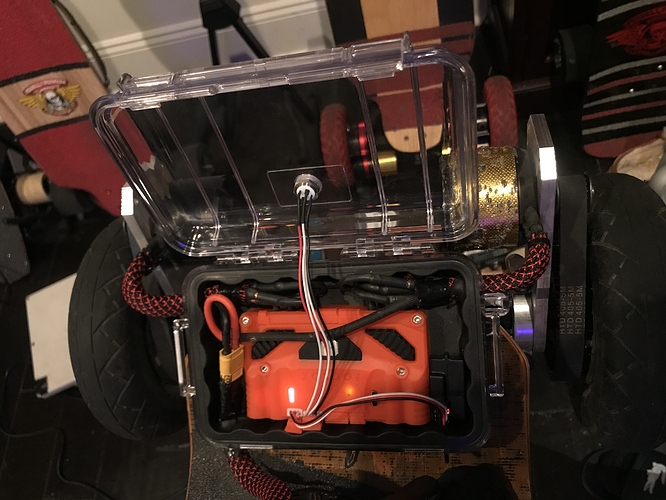 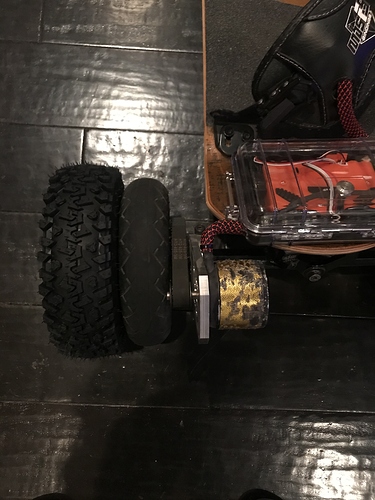 Once I have the 6384’s and pluggers on I wana do consumption tests before landing on the final battery.

Looking good @Brently!
Progressing quick lol
I like the box for the esc, it fits in there nicely.

Those mud pluggers are serious business huh!?
The other tires look puny next to them! lol 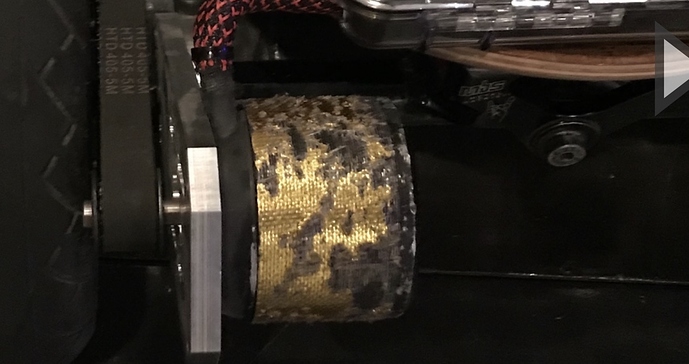 Haha yeah that motor was on a build with 76mm wheels and I didn’t have the mount angled up enough. That’s all from like one day. 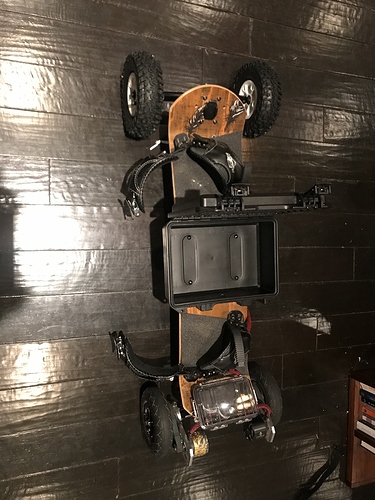 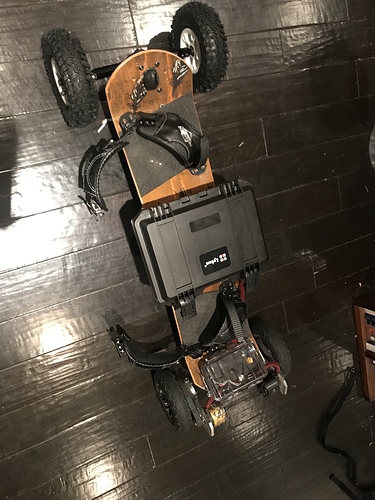 Box mounted, it’s an uggo but this way I can get a butt-ton of cells in there and still properly use the heel straps. Waiting on longer screws for the new hubs and 72 pulley’s

Took a page out of @glyphiks book and mounted the heels straps adjuster out so u could run the battery box in a more ascetically appealing manner: 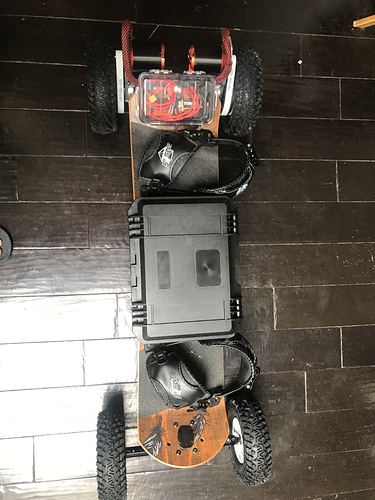 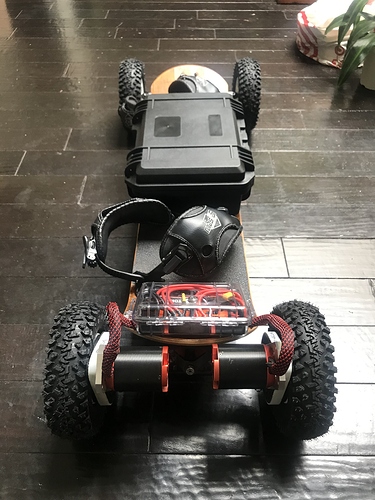 Also got the back mud pluggers and pulley’s on. Running the APS 170kv 6384’s till I get some more 10mm motor pulley’s for the maytech’s

Looking forward to seeing how these steel braided belts hold up. 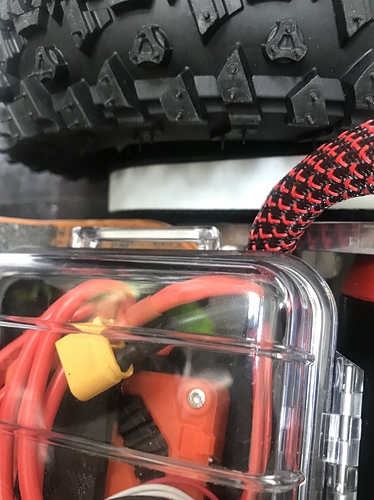 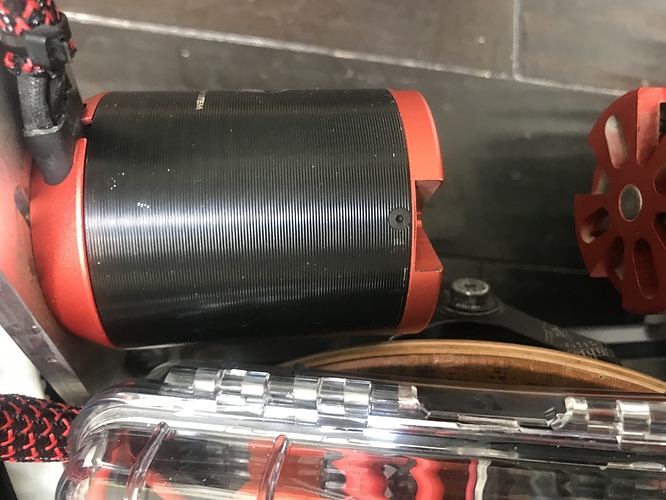 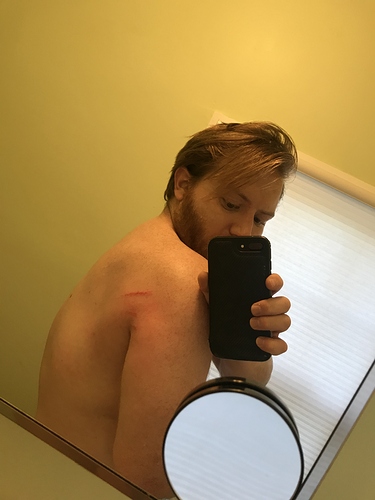 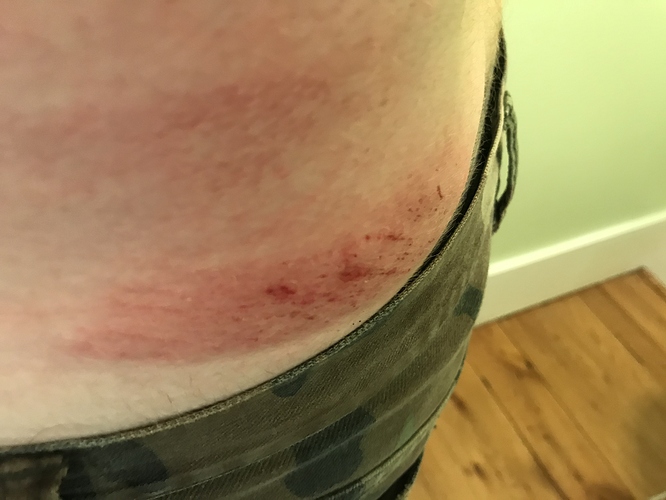 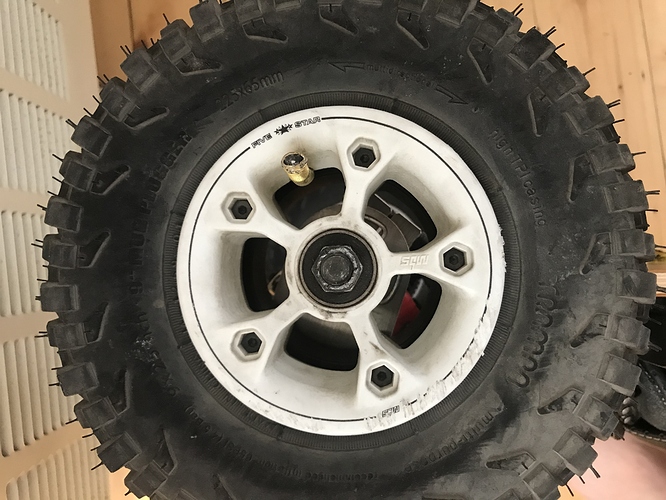 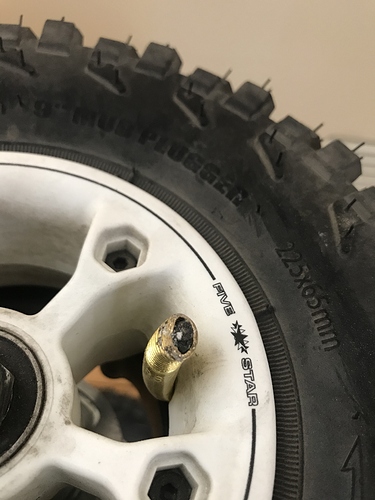 Had my first wreck at a decent speed in awhile. Doesn’t look too bad but I’m sore as hell and can’t lift my right leg while standing too well. Gotta hit up a doc just to make sure everything’s still good. Also I’m not doing dumb off-road stuff without my padded shorts or body armor again. I got a little too aggressive on some mixed gravel and pavement, got wobbles, thought I had it so kept on the throttle and you know the rest.

I might start mounting the tips inside the wheel to avoid this kinda thing as well. As you can see the top is pretty screwed but the rubber is fine (no punctures) so I would still have a working tube if I mounted them tips in.

So talked to a doc turns out I gave myself an adductor strain in my right leg from that crash. Been resting it for about a week. I think I’ll rest it another week before I step on a board again. I have full movement back, but knee area still doesn’t feel 100% and I’m not fucking with that. In the mean time I’ve managed to save that tube I was butthurt about. Gotta love the good ol dremel: 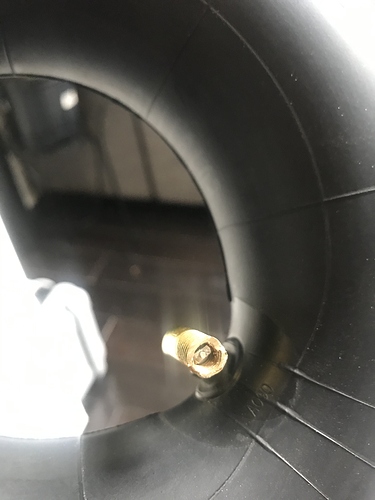 Must be so infuriating having the board sat there and not getting on it. But yeah, definitely get yourself to100% first, otherwise you might be out of action for even longer.

Good work on the valve!

FYI, I tried to take your advice about facing the valve inwards. It’ll only work on the front, as the valve would hit the drive gear on the rear

yep really sucks, esp with covid. All I wana do is ride to get out of the house. yeah only works for belt for sure.