The "BIG ONE", battery trailer build

This one is gonna be probably the biggest pack ever seen connected to an esk8 on this forum, but I finally got it.

A healthy 32,4kg in the packaging

I’m gonna be using it for my 2000km+ adventure journey into the arctic circle.

Status: Planning (probably not gonna happen in 2020) So I’ve been thinking about doing this little longer distance journey/adventure on my Esk8. Objective: Reach “Three-Country Cairn” by only using my Esk8 (walking allowed) The three country cairn is the point where the borders of Finland, Sweden and Norway meet right up in tip of the Finnish Maiden’s arm and in the arctic circle. [image] [image] The distance from my town is about 1100km in one direction using the recommended route by …

Fuck yeah. Following this one closely. Can’t wait to see how this turns out

Here’s a closer look at the module and what the next moves are. 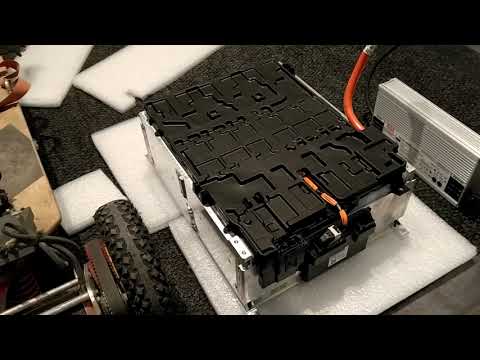 I also remeasured the weight for the plain module and it came to 29.8kg, so 30kg roughly.

For scale, could you take a photograph just with it on top of a skate?

You assume i’m gonna go hard and fast, but I’m going long distance, so the two VESC 6.4 and the APS motors are gonna do fine.

For scale, could you take a photograph just with it on top of a skate?

I also stood on the board with i3 module and the first thing immediately that I noticed is how much pendulum effect it added, being a very heavy mass high up.

Dear lord. I want it.

Dear lord. I want it. 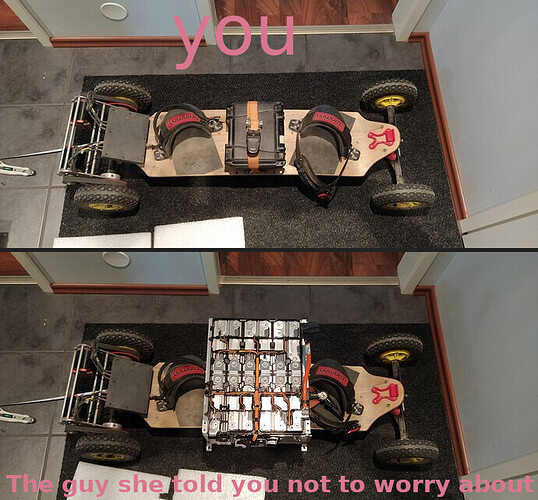 I also bought it as an investment, as it can be a good energy storage system for possible solar systems, UPS and works/mates well with 48V solar inverters.

The reason why I also decided to go with the trailer route, is that I foresaw that adding too much weight on top of the board was gonna cause stability issues. I can optimize the height of the battery in the trailer to be low, so it’s not top heavy.

Oh, sure, an investment

Yeah fuck having that on the board. Keep it low in a trailer and you can keep your supplies/camping shit on top. Trailer is perfect for this and exactly what i will do when the time comes

yep been thinking about battery trailer design for a little while. I am sure anything too wide would be a disaster once things got tight. 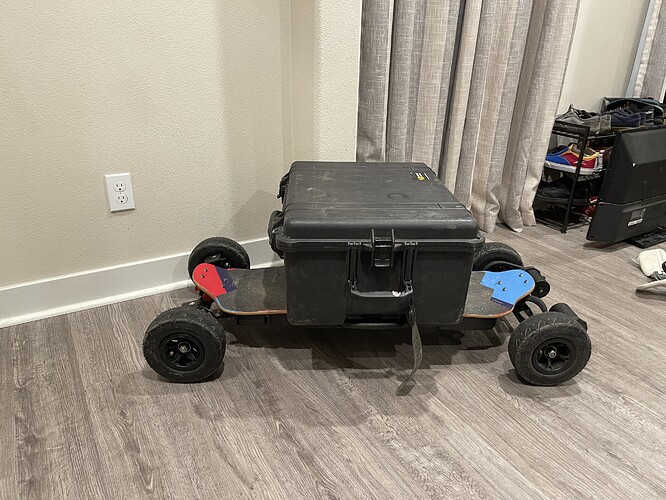 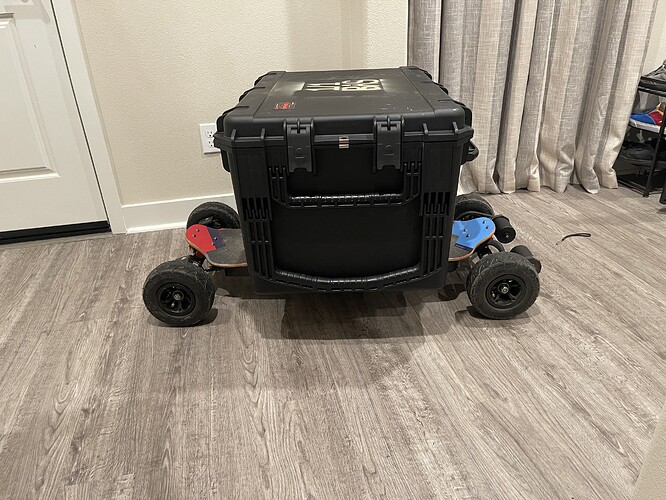 Does it come loaded with ice and drinks?

The big pelican was intended to fit a 60lbs 3d printer, but we were short 5cm.

I drank all the drinks. But, I’m envious of ur goals.

My biggest pack (12s10p of 40t cells) was too heavy. 3 sets of lipos totaling similar w/hr was also not fun.

Here’s an early concept design for the aluminium frame for the trailer with the roughly correct size of the module in the bottom.

I disassembled the positive terminal plastic housing, as I need to get to both B- and B+ to charge and discharge, as I want to do a capacity test, which is gonna take quite a while with a 150W load

I also broke into the enclosure where the balance lead connected to, it was the BMS.

Linear/Analog battery stack monitor ICs LTC6801 and LTC6802-2. These are older generation than the LTC6803-3 that I’m using on the FlexiBMS.

Also, when people complain about slow balance currents. This sucker has 56Ohm bleed resistors, where the FlexiBMS is using 47Ohms, so technically this is a slower balancer than the FlexiBMS, but it doesn’t have the same size constraints as the Lite does.

I’ll 3d-print a custom holder for the balance breakout board and probably integrate the FlexiBMS on top of it as well into the same enclosure. It’ll be a nice contained package then.

EDIT: Still need to get to that negative terminal, but I don’t see any easy way to get rid of the enclosure around it… might have to go a bit more destructive on it.