I am terrible at build threads. After it works and I clean up the shop, I go skate and never really get around to posting any coherent build logs.

So, here’s a chronological posting of what I’m up to in the days prior to dump Rd races and Barrett junction.

I took all next week off to get my shit together. I’ll post fairly often.

Not a serious thread. No attempt at organization. Nothing special, just my inability to let go of my CGT as evidenced by the 5th substantial revision of my 2016 carbon GT.

Yes haters, I intend to finally scrape the branding off the bottom and recoat/seal.

Warning, 2 expensive decks were cut up in this adventure.

The following pics are from a few weeks ago when I was getting restless watching @s5300 finish his build.

The thought, “am I going to show up to barrett junction this year with the exact same board?” Crossed my mind after a few drinks. Does a Hollywood starlet wear the same dress to more than One gala? Hell no, this is California. This followed: 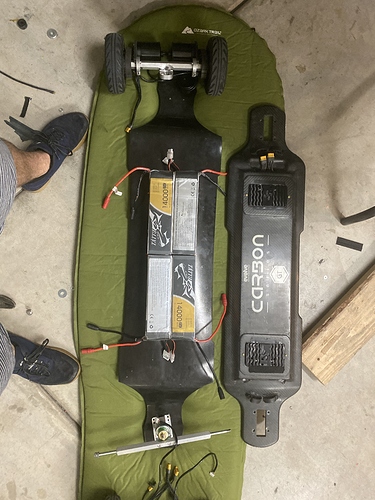 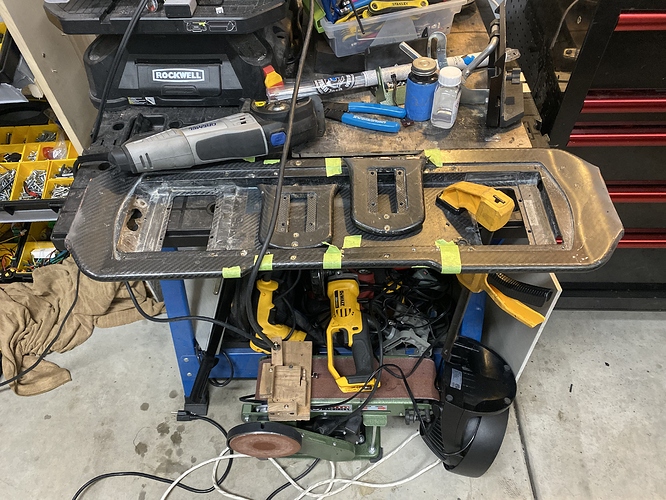 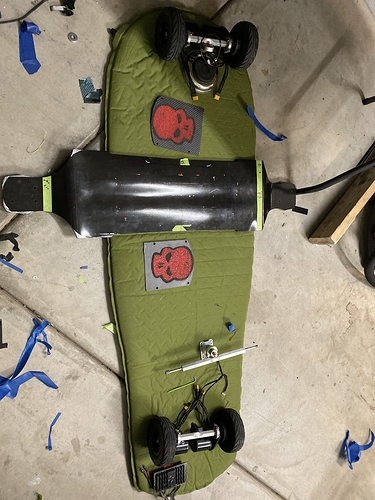 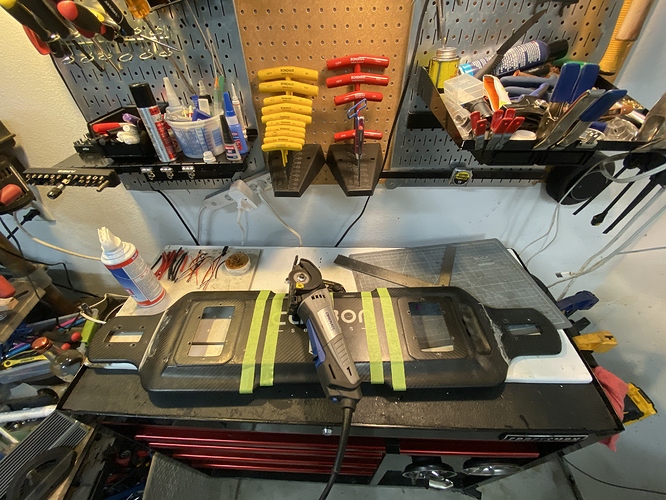 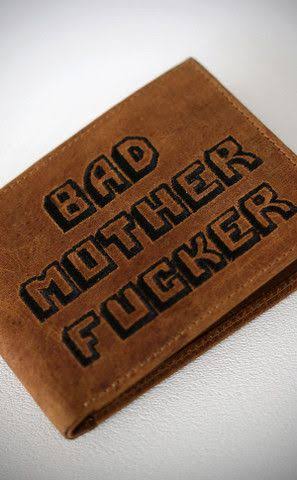 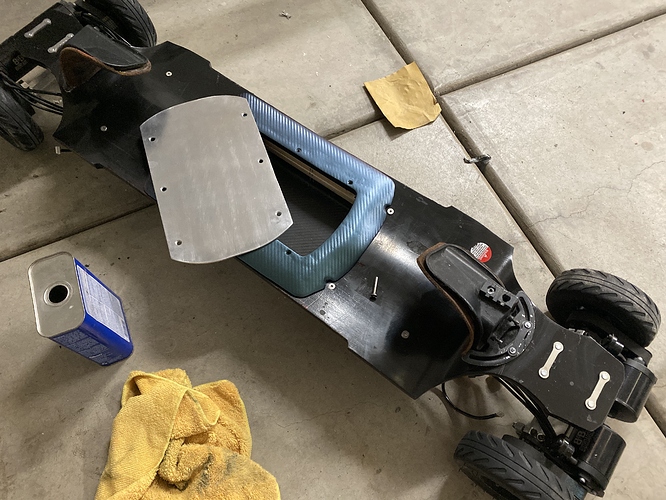 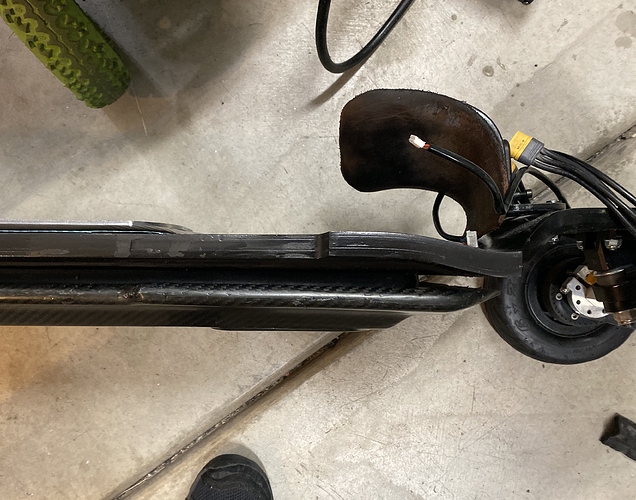 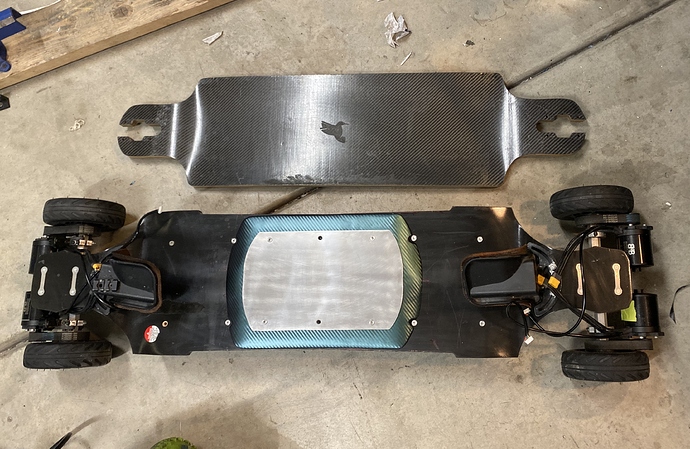 I tried a stack of heated kydex and tried to make essentially a giant gasket that would mush into the semi-organic curvatures between the two boards. Failed.

I Tried wood. It was super effective. It’s stained black. I’ll post guts later. It’s semi structural. I’m going to glass them or CF reinforce (under vacuum, not for looks) later and permanently attach to the 44 deck.

So, aluminum for a lipo heatsink lid. That’s why I did that. I’ll cerakote it or blue it later.

Glitzy fake blue carbon fiber vinyl wrap covers an amalgam urethane/epoxy/fiberglass riser I made. It looks like a bondo junkyard fix atm. I’ll perfect it later and pick grown-up/non-bro paint. But now, it’s finally shaped, functional, tough at nails, and gives me a surface to bolt an aluminum hood too.

These motors are the @S5300 battleHardened motors. Thanks to @mackann for the spare after I cracked a magnet. Extra classy.

I have 240kv 6374s. I think the windings are fixable. Long story how I broke one of those cans. TLDR, always turn off remote if you aren’t riding.

I’m using 2 14ah 6s 25c batteries to race. I think I can fit all 4 14ah lipos for a big pack so I don’t have to worry about charging as frequently or heating up too fast.

Going to rewire everything with over spec’ed turnigy wire. Sydney finally convinced me to get off that amazon crap and make a bulk order from hobbyking (all the awg’s Sizes stocked

) of more wire than I’d like to admit to buying.

Yes, I know CF is conductive.
-using gtb2 moded remote
-canbus 4wd
-meter pro unity plug in obvi
-YPG 12s UBEC for a claimed 20a output with several selectable voltages. Used for creature comforts. (Lights, usb charger)
-using double momentary Unity Power button switches, plan to actually be helpful and show what I’ll do to make it single button. (Again thanks to @mackann for how-to)
-perfect world, someone recommends the perfect smart BMS that can tolerate 200a discharge with reasonable shipping times, I win BJ, learn how to fly and disappear into The sunset.

Otherwise, will totally settle for: Board works, I don’t die racing, maybe throw in a diebiems for Battery telemetry (bypass discharge) and kicks if there is room.

Only spent 11$ on 5m stainless steel fasteners, 14 on inserts, 5 on wood for this build so far.

Other parts have been sitting around, transplanted from other builds. Last substantial cost was the lipos last Black Friday, maybe hobby wire buy late nov.

Badass, you used the CGT as an enclosure.

Did you have had the 14Ah tattus already out for some rides? If yes, how you like there performance?

Still. You one bad motherfucker. This has to be one of the most exciting builds I’ve seen here

heaps of the real DIY shit.

@Andy87 lipos? I’ve ridden a few times. Roommate rob finally hit 50mph on them. These have been great, just very long aspect size ratio. Will not fit trampa monster box. Price? 150 usd per 6s 14ah pack is great. But they are soft Shell packs. I’m kind of a fan of the dumbed down ‘smart’ hard shell packs tattu makes. But a 10ah 6s pack is around 200-250 per

@Linny they seem pretty happy with their in-house 4wd. Jeff signed my old cgt stock motors. They live on in a board @Miss_Serineh uses.

@glyphiks thanks, but it’s mostly recycled ideas with some arts and crafts.

Play the modest card all you like, these are just the types of builds i froth on

That was why I didn’t bought them like 1.5yearw ago when I have first seen them. They are way cheaper than the average tattu lipo, even if it’s not Black Friday. Was always interested how they hold up to the specs.
I got a discharge test from tattu over multiple cycles which seemed very reasonable, but still couldn’t explain myself from where the big price difference was coming.

So do you balance your pnuemies for these crazy speeds or are you just one of Skatan’s boys?

I’ve hit 43-44 mph on Bergs but the vibrations from drivetrain get pretty severe. Tried balancing them, failed miserably

Mike’s boards are too scared of him to fucking DARE and try to wobble on that legend.

If I were a crippled evolve, I’d also be scared

I think crippled is the wrong term. I think evangelized is more suitable.

This is the first 44 to get the “hole cut right through the fuckin middle” treatment! Well done!

This is great Mike! I want to ser some close ups on How you mounted the hooks on the drop.

@davidbonde Yup, In about an hour. Done with work for 9 days. Driving home.

-I’m gonna try to make Sunday dump rd races with this board, else I’ll take the Navare (@MoeStooge)

-Klause is coming down Monday.

-any folks get a wild hair up their ass and decide to drive down for Barret junction could probably crash on my couch or a blowup mattress.
(@skunk, @Saturn_Corp, @DerelictRobot, @Kellag et al)

Let the buildening start in earnest!

I wish I could. I’ve got like 5 days left to finish packing and cleaning my apartment before the move.

Move to the junction