Rebuild of a china monster board.

Was gonna say, I would imagine unless one was brought out of mothballs they would be running BLDC for all the benefits that would give, only benefit to BDC is cheap and easy to run. Oh well, backwards compatibility is always nice, even when its clunky.

Oh yeah like it’s definitely supported by VESCs, I just wasn’t sure if they have different torque characteristics or weird stuff I don’t know about that would give crappy startup. At the moment I’m assuming it’s a combination of no sensors and no HFI

And @Clownrock95 are you definitely using phase A and C on each of the VESCs? I presume it’s just left to right on the PCB but some Googling may be required

I read in a couple places it is just the 2 outer wires, and I assumed if that was not right it wouldn’t work at all because phase B would not be being triggered at all so it would be no circuit, will do some looking to confirm though.

Yeah I’d think so as well, but the diode action in the mosfets miiight provide a path to ground or the driver could be left in some intermediate state between fully on and fully off, or some other weird behaviour. But yeah two outside ones lines up with phase A and C, and I’m just kind of stabbing in the dark

Hey, stabs in the dark is how some people were made, so sometimes they work. I appreciate the input even if it doesn’t end up working.

Couple video clips, first is just matting the gas, second is me sitting on the board slowly giving it more and more throttle until it kicks in (you can see it creeping before it decides to kick in with a clunk and tries to throw my ass off), third is just a gratuitous burnout lol. 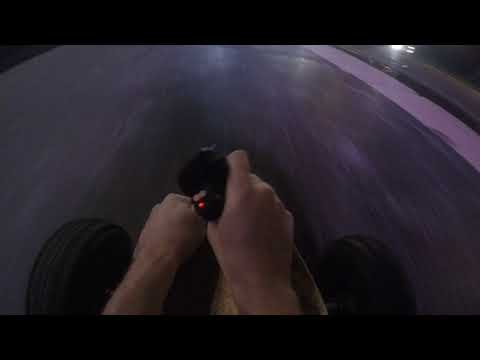 Went for a short ride, here’s a bit of parking lot action. Sitting down due to the roughness of the throttle, just want to test the Vescs with load for now.
After a bunch of hard acceleration and breaking the motors were hotter than the fets on the Vesc’s. Not exactly running them hard so I’m not surprised.
I did raise the motor current limit too 100a and it seems to help, even there’s no way its even hitting 60a per motor let alone 100a. The motors are rated 30a each, and the normal battery draw for the board is around 40 IIRC, so no way its doing 200 let alone 120. Those lead acid batteries would die trying to pull that much out of them. Maybe its just me getting used to the throttle, maybe it actually did something IDK.
I went out and did a little bit and went to grab my motorcycle full face (Hence the video), normally I’m one of the horrible, no good, very bad men that goes without a bucket, but even at 15mph, leaning that far that close to the ground I figured it a good idea. Wish I would have checked the cam angle though.

Cool! You got her running!
Congrats so far. Hopefully it rides good for your taste.

Check the windings on the motor even sensorless it should still pack a bit of a punch, could be shitty motors tbh.

Being brushed the motors are gonna be quirky, was just hoping these would work well enough for a while. My best guess was that since they are 4 pole motors they just don’t have alot of starting torque, but For some reason I didn’t have that issue with the oem esc so Idk. Once they are moving though they got plenty of torque.

Gonna try bumping here before I start a new thread for this question.
What motors would be a good idea here? 255mm tires, 1:4 gearing I think. I would like some 90kv motors as that would put my max speed at about 15-20mph I think. Issue being price and current rating. One question would be assuming I am not running them hard would they be ok being current limited?
Or would I be better off going for some 140’s and just ignoring the extra rpm range I can’t use?

Would I be better off getting somthing like 2 Flipsky H5065?

Or even just getting one 90kv and a beefier vesc, even though I like the 2 wheel drive.

I’m a bit overwhelmed with options…

Forgot to mention the end game battery I have is a 10s6p samsung 30q pack I think. (Will check when I’m at home)