Rebuild of a china monster board.

Thanks to a member on the forum (they can identify themselves if they wana be named) I got a care package with a bunch of stuff. (Not pictured is a bunch of bearings and a set of MBS wheels) 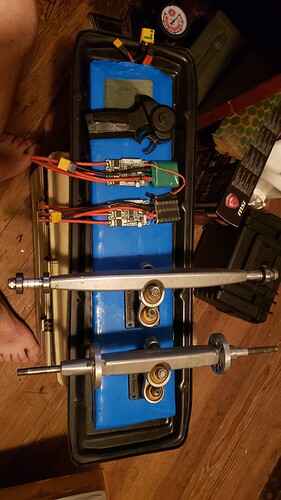 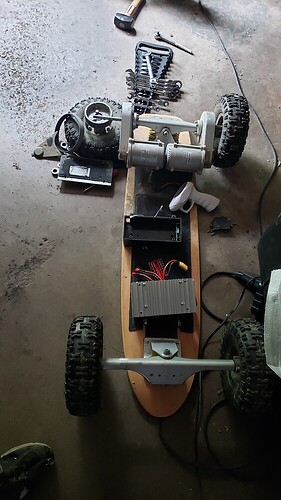 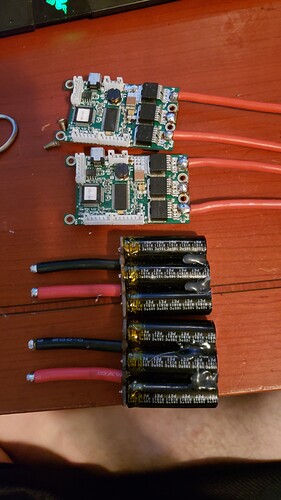 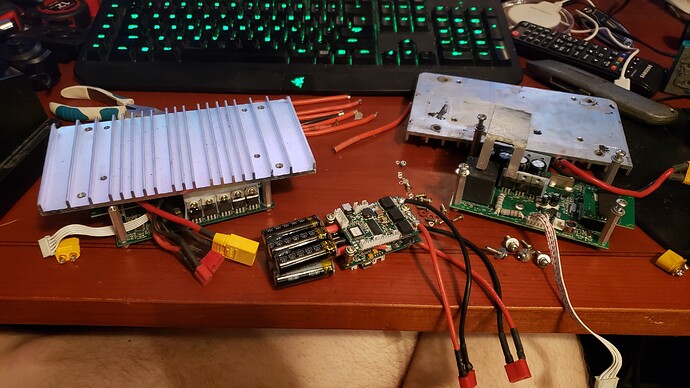 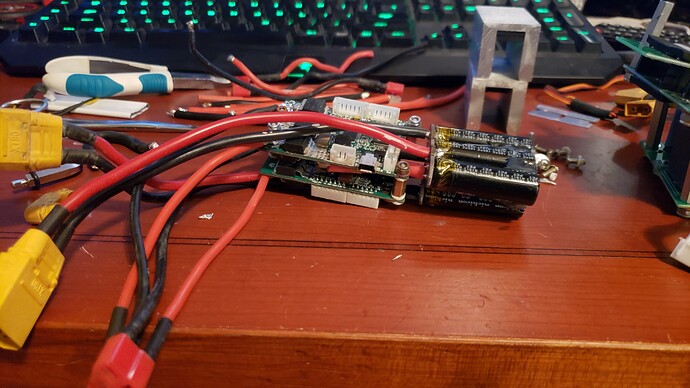 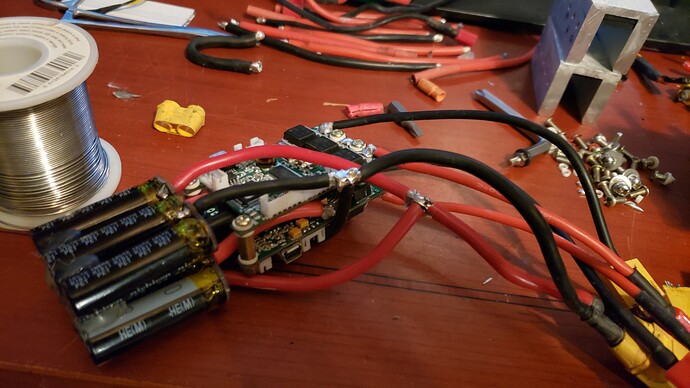 Fingers crossed I can figure that out and I can continue this build with a new battery box and better vesc mounting.

I know its not recommended, but i love your sandwich vesc idea

Curious how this one will turn out.

It makes them fit nicely in the box and keeps it a bit cleaner, but its not gonna be great for thermals obviously though. Bigger issue right now is the lack of start up torque. I’m curious how it will turn out if I can figure out that issue lol, because I have nearly no idea what the plan for the battery is lol.

Bigger issue right now is the lack of start up torque

bc you are using the old spare motors from the spare dinosaur eskate?
Any specs of the motors? KV?

bc you are using the old spare motors from the spare dinosaur eskate?
Any specs of the motors? KV?

I had the same gut reaction. Not sure these motors will work.

I seem to remember an old board like this turning up recently with very similar looking brushed DC motors, are these the same?

I mean, they may be dinosaur tech but with the stock ESC I could crawl up small curbs with no issue (Part of why my verreal feels weak I’m sure), with 2 of these vesc’s I figure I should be getting something.
MY8922 DC motor, 36v 30a 3000rpm rated speed.

I did make a post a month or two ago about rebuilding it, in which a couple people suggested I should be able to keep these motors.

(Deleted and reposted to edit) Checked, you did comment on that one too.

Oh lol I didn’t realise this was the same board! Cool, do you have any more info on how you set up the VESCs with the motors? I’ve never done setup with a brushed motor

Was hoping they would, and was told they should. Oh well, at least the forum member saved me the money so I can replace them if I need to.

In vesc tool under the wizards tab there is a “other motors” setup option, I just used that and left basically everything default. Then just use the outer 2 motor wires. Works pretty good once it gets going, I have stripes in my yard from the wheels spinning. Not while riding of course, throttle is to unpredictable for that, but its still an 80lb board on 10in knobbies lol.

Interesting, and can you let us know what settings it auto-generated for the motor? Particularly current, but I don’t have a DC motor to test it with so a screenshot of the motor settings could help

I used some pcb standoffs from the old setups, and put the vesc’s together and soldered up the wireing. (I don’t plan to keep them this way, just while I design a box for the battery and work out the kinks in the vesc’s.

huh you could throw a thermal pad between them maybe, if you were keeping this.

Didn’t plan to keep it more that a few miles of riding, just enough to make sure the Vesc’s worked and get them tuned to the motors, but we see how that’s going.

the brushed motor option used to be a lot more obvious in the setup.

I mean if you had a FRC robot you wanted to VESC swap and ride to Taco Bell you would be pretty smart.

they actually use brushless motors these years I have forgotten…