MTB is weak in FOC - what did I miss?

I’m helping a friend upgrade his MTB from those 150A car ESCs to a 12s battery and a flipsky dual 6.6 plus. BLDC works fine and he wanted to switch to sensored FOC. I’ve yet to try FOC myself but okay, I can follow a tutorial (regular vesc-tool 2019).
It sort of works but the acceleration isn’t great so we play a bit with the throttle curves, we get a little improvement but not enough for his liking. He basically want to be able to hill-climb. I’m not sure if that"s doable with FOC- go from a dead stop on a hill with good acceleration?
I can’t find the specific clip but I know there’s AT boards on FOC that can do offroad quite well. Yes, I know BLDC is better for that, more power, speed, etc. but he really wants FOC.
I’m pretty sure we’re missing something simple but I can’t think what it is. Any help would be greatly appreciated!
Battery: 12s, 10ah
Motors: turnigy SK8 6374 192kv using sensors
Flipsky 6.6 dual plus 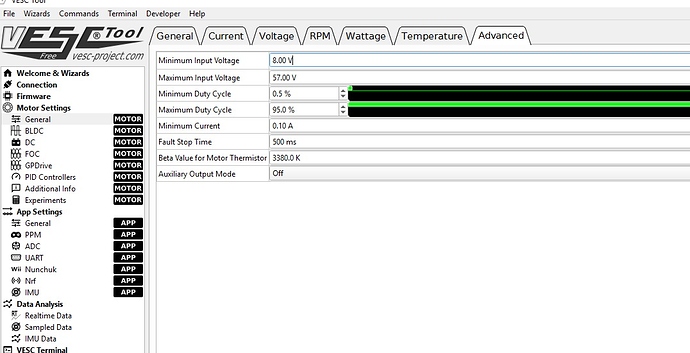 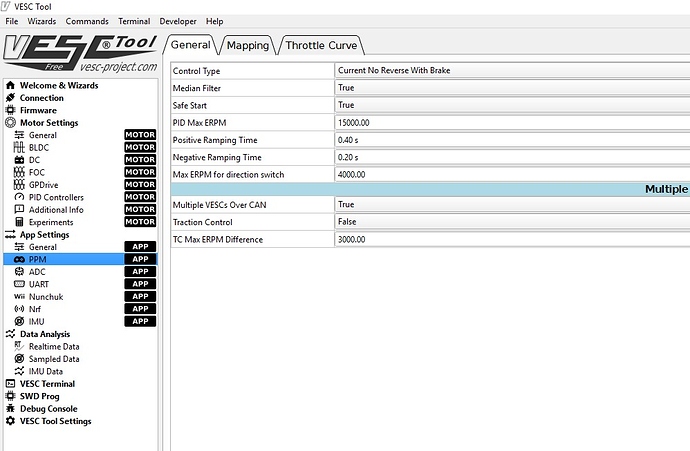 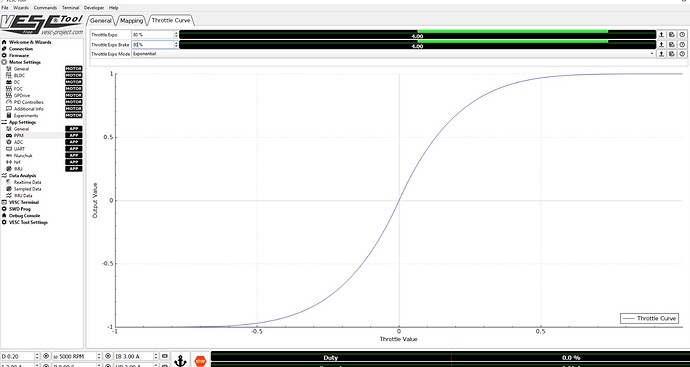 Alright, thanks, I’ll pass that on. Would that help with the acceleration though? I have explained to him that having the best of all worlds in a hybrid is difficult at best.

It would help immensely.
Easiest thing to do is get some 13T pinions.
The gearing would still be too tall for my liking but a lot better than what he has now.

Also, I assume the 10Ah battery is a LiPo and can supply the required current.

Well, guess I know what we’re ordering next. I’ll try it and update here.

Also, I assume the 10Ah battery is a LiPo and can supply the required current.

Trying to confirm what this setup is, I’m pretty sure he’s using BLDC, but I don’t know what ESC brand or settings though. Can anyone tell? Any chance that it’s FOC?

foc energizes more of the copper in the motor simultaneously so it’s more efficient- less losses for a given power output.

in bldc mode, you simply get the battery voltage for peak power. hence for pure power and racing, bldc might be a better choice.

Yeah, this is pretty much what I thought, but we’re talking about wanting an idealised setup, or as close as possible. Hypothetically, could you get similar offroad performance in FOC by using lower kv motors in addition to increasing the gear ratio?

Hypothetically, could you get similar offroad performance in FOC by using lower kv motors in addition to increasing the gear ratio?

I think any given motor you use with FOC will have a lower no load rpm per battery volt and peak power because it sees an RMS voltage with the battery voltage as the peak. Hence KV should technically be measured in BLDC mode, and the true value is a bit faster than the motor will turn on it’s own because it’s the speed at which the battery can’t supply any current to the motor. It should also be measured with a controller that can do 100% duty cycle, and the vesc does max 95%.

It’s written in the video description

Some VESCs switch to BLDC at a certain RPM I believe, such as the Unity. Gives you best of both worlds. FOC is usually better for 0-5km/h and a lot quieter at low (<20km/h) speeds.

That was going to be my next question- are there any vescs that actively switch between the two modes as needed. So the Unity can do this?

This is not true, if you set it in FOC it will run FOC all the time, what you may be talking about is switching from sensored to sensorless

Aah Pedro, that is possible! My bad.

Overall, I like FOC more especially on mountainboards. You have more and smoother acceleration from a standstill, at least the first second. Smoothest way to start on hill, which is what your friend wants to.

But yes, I believe the gearing is off.

The first link is dead. the second one leads to an Instagram page:

Hi @Okami, Bambug is manufactor for electric Mountain board and Skate board in KOREA. Bambug has a self-developed ESC. This ESC has very very Powerful power. One weak point is that you must use Maytech motors together. Bambug sell “ESC+Remote...

I think positive ramping is to low in reaction, I use .1 for pos and neg. Also agree with @Taz