As promised from an earlier thread, the build thread for my lady friend’s first electric board!

A while ago I took a friend for her first electric skate ride, now she’s no longer just a friend and no longer has to steal my boards. A win-win for me!

Massive shout out to pookybear and Gamer43 for most of these parts, this would have been a cheap hub board without you guys!

The board needs a name, if you got something in mind I will show her what you come up with

Currently waiting for her to come back so we can program and test it, wish her luck! 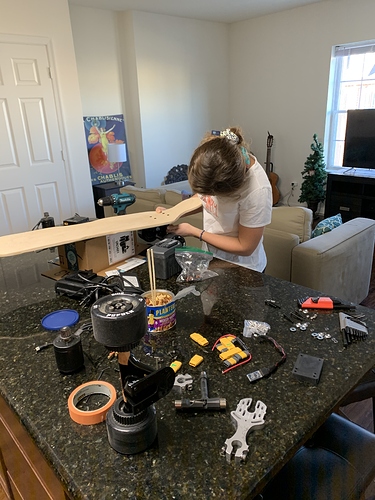 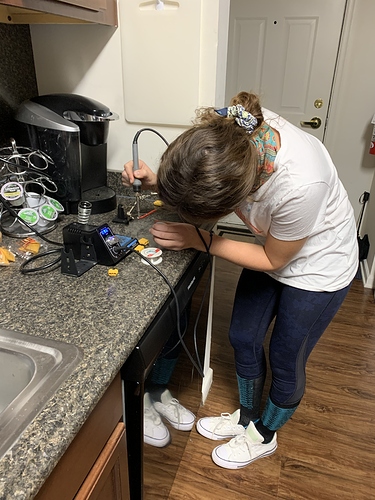 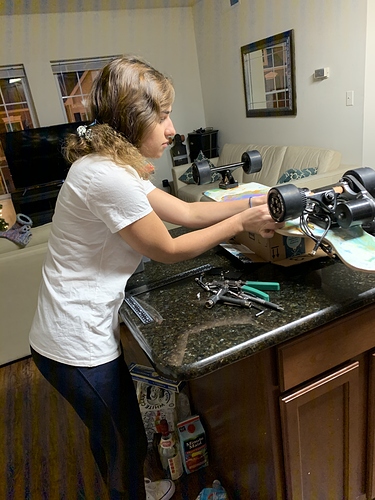 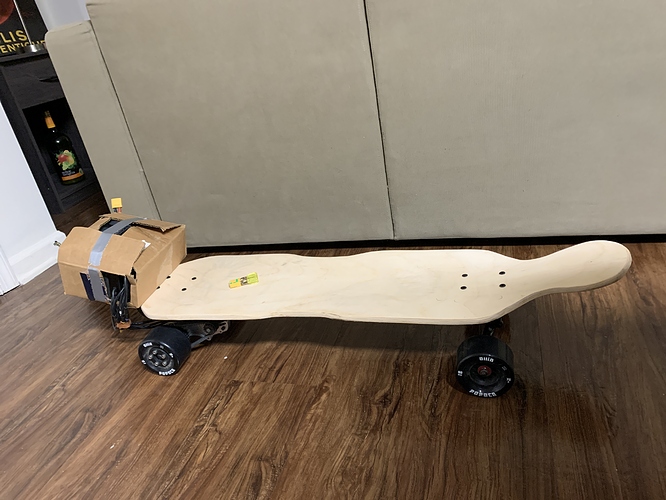 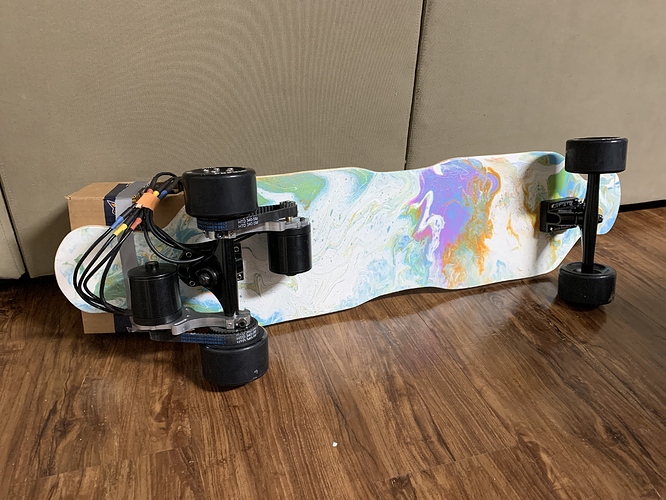 Hell yeah dude! Did she / you do the acrylic pour?

Not sure if the pic angle is deceiving but you’re belts/pulleys look like they aren’t lined up. One wheel pulley is too close to the mount?

Are motor mounts reversed?
Aren’t da motors supposed to sit inside that recess

Good eye! I think so too.

She did it herself, there was paint everywhere

For a second I thought that tail was only on one side and it looked so ridiculous. On both sides it makes sense…

Looks like a split angle or drop board if you mounted the trucks on the flat.

I look forward to seeing it ready to go and riding.
^assuming that box isn’t permanent

No one has asked about this/???

I was gonna make a joke about @MM`aner having a lot more hair up top than expected. Decided to talk about the board instead whoops.

now she’s no longer just a friend and no longer has to steal my boards. A win-win for me!

Real talk tho, her motor mounts are on backwards (?) I guess, the motor is supposed to sit in the recess and the pulley should be on the flat side.

Also, that has to be one of the funkiest shaped decks I’ve ever seen lol.

Good job buddy whatd I tell you. Glad yoy stepped up and asked her out. Wait🤔 did she ask you out?

Nah this is for sure. The motor mounts are backwards bro @ZachTetra

I know the motor mounts look backwards, but it’s because the Haggy motor and pulley sits around 6mm higher on the shaft. If the motor mount was on ‘correct’, half the motor pulley is past the wheel pulley

Trucks are mounted funny because the ends are splitting in half, but she still wanted to use the deck anyways

name this the “community wingman build”

Tried running the setup ESCs and I think the CAN is toast on the second controller, it was missing the port so I soldered the cable directly and neither detects CAN connection. I will check later to make sure it’s not shorted under the PCB. The motor detection is also wonky on that controller, it didn’t find the sensors but I’m not concerned about it…probably just loose somewhere.

I didn’t get a change to test the prototype rolling antispark but I’ll get to it eventually, just running a fused loopkey until then.

The Bluetooth module also isn’t playing nice yet, it doesn’t show up as a device through the Xmatic app, but since rthr VX1 is using the one UART port it doesn’t matter until the second ES is connected. I have a second VX1 harness so we might use split UART control and no Bluetooth, still deciding.

We ran it with just the one motor and controller and after some speed wobbling it seems to run really smoothly. The turning seems really bad though, it’s running a 54 deg cone/cone and 48 deg barrel/barrel at 91a with a 22" wheelbase (screw to screw distance). It can’t turn at all and still has wobbles above 20 mph, any suggestions? I’ve run a nickel board faster with worse parts and better handling…help?

There was an incident with a loose mount but that’s my bad…may have forgotten the grub screws. Will replace with machine screws tapped into the hangar once we like the positioning.

The range seems a little weak on it, it was reading 36.7V across the temrinals and is supposedly a 4.1Ah battery (sticker says 3.9Ah but the case says 4.1Ah)…so with a single motor urethane drive it should be 5 miles before the ESC cuts out (34v start and 30v end), but it went significantly less than 3 miles befefore it cut out. Maybe the capacity is way lower than expected (it’s a used battery)? Maybe it does like 2 degree C weather? Might be getting a Meepo 10s2p for it instead…fingers crossed.

She absolutely loves the deck and the height, but not the weight distribution…the center of mass is just in front of the wheel but being the motor so it’s a bit unwieldy, the tail keeps getting smacked on the ground when picking up/putting down. Probably going to mount everything underneath, at least he ESCs and electronics…the battery is super chunky so it doesn’t fit under even with the massive risers.

After the board died and mine nearly went dead, I was towing her back when we hit a pothole and got tossed…I landed on my feet but she wiped out, good thing it was super low speed and she had a helmet.

Overall a rough start but it’s getting there, should be a good board soon enough!

This will be put slightly on hold for a bit, she’s going to be away for part of the winter and it wouldn’t be any fun if I finished it without her. I’ll try to fix the ESC while she’s away though, it’s just a lot of poking and prodding.

P.S. get you a girl who can solder 10awg to an XT90 as her first time soldering…she did a pretty good job of it and I’m hella proud of her, way better than my first attempt and I’ve been soldering for a long time

Soo… she has a new boyfriend and a new board. Which does she like to ride the best? And which one is fastest?