is this a good soldering iron? 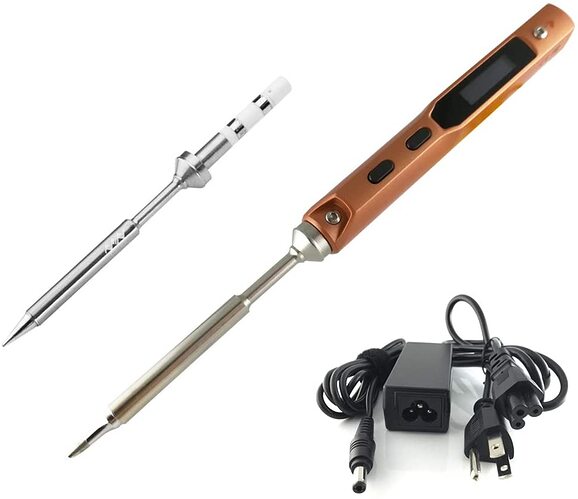 We provide a 24V US Standard Power Supply adapter cable, so you don't need to find anything else for Household Use Specifications: - Power: 65W. - Temperature stability: ±2%. - Soldering tip resistance to ground: <2Ω. -...

Is this a good soldering iron to get?

There are better, there are worse.

Want some more Infos? Type ts100 into the search and you’ll find what you need.

Pretty sure this what @PedroMcJimenez uses and hes a big fan

i use that also, it’s been great so far

I run that same kit. The 2 tips it comes with are handy for smaller stuff.
I suggest adding the c4 tip for larger xt/mr60+ and 12awg+. Its plenty capable of soldering 10awg leads.
YWBL-WH Mini Stainless Steel Soldering Iron Tips Replacement for TS100 Soldering Iron(TS-C4) https://www.amazon.com/dp/B07YY7GM8Q/ref=cm_sw_r_apan_i_WQ3NGZTQQ1SM2CW6Q7B2?_encoding=UTF8&psc=1

Gonna stick my disclaimer up front but imagine it attached to any statement: this is a little subjective, I have a decent elec background but am not an expert, read other stuff too. The main question with an iron like the TS100 (I’m including TS80, TS80P, pinecil, SQ01, any other derivative or similar irons) isn’t “is it good” but rather “is it trying to solve the same problems I am”. They’re roughly going for:

If you have to bring your iron anywhere, and you’re not already a super specific field operative spending lots of your employer’s money, these are great full stop. In my case, this includes household nonsense like reaching up a ladder to solder an in-place LED strip to make it around an unforseen corner.

But what these aren’t laser focused on is working at a bench on big 8 AWG wire in the 100% most efficient and effortless way possible. They theoretically can do 8 AWG with a bit of swearing and waiting around for the right iron tip, but it’s not ideal. Crucially they just aren’t as spacious or comfortable or effortless as a fixed station that has your copper cleaning pad and big handle and nice silicone cable in place already. Some of them can run off a USB phone charger in a pinch, and with an adapter the vast majority can be brought to a field in the middle of nowhere to fix up an RC plane, but that doesn’t matter if that’s not how you’re going to use them. I also want to emphasise that even for soldering small components or lower power stuff, it’s still nice to have an iron with a great grip and an interface that isn’t tiny buttons and a cable that doesn’t also charge your tablet. It’s about workflow as much as size of the components you’re working on