Is charging too slow bad?

I’m not sure if I understand all of your post but it seems like you’re charging your 10P pack at around 5A, which is 0.5A/cell.

With that low-amp charger you would be around 150mA/cell charge rate. I don’t think you’ll see any difference in cycle life between 0.5A/cell and 0.15A/cell.

But if they both leave the pack at room temp then I say go with the faster charger. It’s charging at a pretty slow rate and that’s good for the cells.

Ohhhhhh, not today…I’m out…you win, I lose. You’re right, I’m wrong.
We’ll move past your ignoring my question…just not worth it.

Hoping the rest of your day is awesome.

I’m guessing LiPos are handled more or less the same way? I used to use a hobby charger that maxed out at 1.5A, and it’d take 8-12 hours to fully charge half of the battery (1 6S pack). Recently switched to an 8A charger, which is significantly faster yet still well under 1C. No noticeable heating of the battery in either case, so is there no reason to use the hobby balance charger anymore?

uhh, sure? I don’t understand.

No noticeable heating of the battery in either case, so is there no reason to use the hobby balance charger anymore?

It depends on how much current each cell in the pack is taking. If it’s a 1P pack then 1.5A sounds great and 8A sounds like it wouldn’t be as nice for the cell as 1.5A. If it’s a 4P pack then it’s less of a concern.

Unfortunately, the charging current level isn’t a thing we can assign hard cell life extending vs cell aging thresholds to.

But you mentioned that the pack doesn’t get warm so 8A might be fine. There’s no real way for me to know though, I know nothing about those cells. All I can say is slower = better but that has to be balanced with convenience.

Some times you just don’t want to wait a full day for a charge.

I have a weird experience to weigh in with. For two of my ebikes I have two 20s8p’s both in the same layout. One is built with Moli P42A’s and one is built with those “tesla” 21700’s.

On the P42a pack - I can blast it with 12amps or .05amps it balances the same, under 0.008 variation between highest V p-group and lowest V p-group

On the Tesla pack - If I drain it down to empty, half, or even 75%. I start to get some highish variation any where from .150 to .250 Volts between most full and least full p-groups. When I charge it with higher amps ~8a - ~12a it balances better than a slow overnight charge at .5a. In that the variation will be between .08 to .1 on a that high amp charging vs the low and slow being around 0.120 to .140 by the time the BMS cuts off the current from the charger.

That’s the thing with LiPos though, for the most part they’re all 1P, and ideal charge current goes by C which is a function of their size. So in my case with a 14Ah battery, 1C would be charging at 14A, in theory. However that sounds kinda high to begin with, so I’ve got no intuition whether they differ from conventional cylindrical cells.

Yea, that 1C charging rate recommendation thing is just an expediency for those who don’t want to take the time to recommend something useful.

It makes no sense to have higher charging rates for higher capacity cells that have a higher internal resistance that will cause more heating.

LiPo’s are just li-ion cells with a different chemistry and packaging. The round cells we use are using at least three chemistries themselves and standard li-ion cells are available with pouch packaging. There’s really no fundamental difference between a LiPo and a round cell that affects how we determine and use charge rates.

Interesting!
So much depends on the BMS and what algorithm(s) it uses for charging. But if you’ve worked out a way to get better results then run with it!

From my research on LiPo packs for RC, anything below 1C charging is a wasted effort in terms of extending battery life. A charge rate of 1C just so happens to be about an hour worth of charge time (it can be a tiny bit longer if the cells are way out of balance.)

Tesla uses packs that are very similar to what we use. The v3 supercharger can pump out an insane amount of power (250kw), and that supercharger will be charging your pack at >1C for the first 20% of the charge.

Pretty much anything between 0.25 and 1C is going to be just fine for your pack (assuming temperatures are okay, and the pack isn’t highly out of balance). You may extend your pack life by a few dozen cycles by charging it at a slower rate, but is that worth waiting 10 or 12 hours for your board to fully charge?

If you were looking for the ultimate in battery longevity, why not use a LiFe pack? It will be more costly than a traditional pack, and bulkier, but the cycles are greatly increased on it.

Inb4 1A chargers become as popular as 8A chargers…

Good luck with that — I’ve searched high and low for them, they’re essentially unobtainium unless you make one or get a cheap piece of trash that breaks after 2 charges.

So much depends on the BMS and what algorithm(s)

It makes no sense to have higher charging rates for higher capacity cells that have a higher internal resistance that will cause more heating.

I think there’s a difference though, because unlike 18650s or the like, a higher capacity pouch is almost always physically larger than a smaller capacity one, so I could see it having the same or less IR by virtue of greater surface area, both for current transfer and cooling. Could be totally wrong

…a higher capacity pouch is almost always physically larger than a smaller capacity one, so I could see it having the same or less IR by virtue of greater surface area, both for current transfer and cooling.

The IR would actually go up for a larger cell unless extra steps were taken. A larger cell means longer distances for the electrons to travel in and out and that = higher resistance.

Higher capacity often also means that they have thinned the foil the positive and negative goop is spread on and that increases resistance too.

For cooling I think it can go either way. If the foils were thinned and there are thicker goop layers (high capacity) then there’s higher thermal resistance and the cell will probably get a bit hotter. But if a large pouch is handling the same amount of current as a smaller pouch of the same specs then I would agree that the larger pouch would cool a bit better due to the increased surface area.

I think that makes sense, at least in terms of advertised C values. Small 1Ah batteries often have 75C or higher discharge ratings, while larger batteries are closer to 25C. However even then the larger battery would still have higher overall discharge, so I’m not sure how they manage to make it behave like multiple P groups.

It’s such a difficult situation to really get an understanding of because so many of the C ratings are utter and complete bs.

For liion (and for lipo actually) your best bet is to charge up to 3.6/7 ish when you finish riding and charge the rest of the way before you ride next time, just time how long it takes to charge from 50% to 100% (or 90% if you wanna have your battery serve you for a long time) and then automate the process, i have smartplugs on my chargers and set it up as an automation when i know im riding the next day, i even set it so that when it senses a drop in W going into the battery it shuts off, thats usually around 90%

you can charge them at 3c but l charge 14ah lipo at 2c without any problem since years!
that why l hate cylindrical cells , life is short l don’t have time to waste why waiting ? l want to ride !

Where do you even find a 28A charger for 12S? That’s pretty much the limit of what a standard household 120V breaker can handle for an entire room, let alone a single outlet.

doesnt work like that , the power supply convert it so you can have higher ouput from the charger ,
and you don’t need 12s charger when you use 6s lipo , btw mine is good to 8s 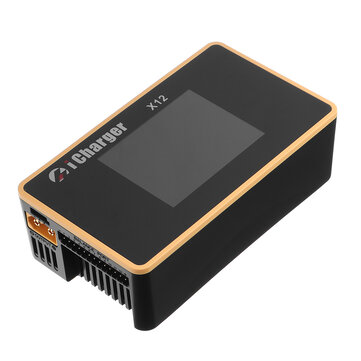