I may be ordering a little over 11 kilos of nickel

or 25 pounds for some of you heathens.

anyway, yeah that’s a fuckload of nickel. I’m askig for samples to be sent now. I know some of you battery builders will be interested in this, so here’s the skinny:

I’m getting 25mm x 0.15mm and if they allow me to split the minimum 25pound order i’ll also be getting 10mm x 0.15mm. 25 pounds is a LOT so i’d be willing to spread some of it around by the foot if anyone is interested.

I asked for samples of the various tempers at the thickness I want so I can test solderability and weldability and make sure I get the right shit instead of this bullshit I keep finding on the internet that’s total garbage. We’ll see what they say. I spoke with a guy on the phone a few minutes ago and he told me exactly who to email in the company.

Yessss. Need some 10mm strips for sure. When do you think you will get it by?

They said it can take up to 5 weeks to deliver once ordered, and i’m not sure how long it will take them to send me samples. But if the samples check out I will be placing an order immediately.

If you want to order in smaller quantities I have a seller that sells .15x25 nickle and I’ve tested it to be pure nickle. It has amazing weldability however I can’t get solder to stick to it for some reason.

ive got plenty of that no soldering bullshit thank you. 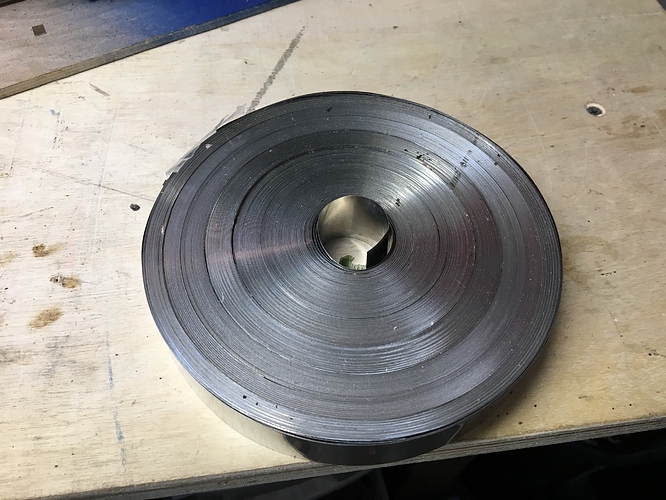 this roll of horse shit was the last straw

You have any idea as to why that is? It’s Super weird.

I have a suspicion that its not nickel at all and is stainless steel.

It doesn’t rust, just makes huge salt crystals grow in your test glass. It throws sparks like mad when you grind it. It welds amazingly well. It does not solder AT ALL. It turns a gorgeous blue when you take a torch to it, not a slightly different shade of grey like good nickel I also have does.

also, another dead giveaway… it throws sparks like mad when you weld it and takes like half the power to weld.

Yeah It definitely took less power to weld but not quite half.

it throws sparks like mad when you weld it

The stuff I got actually dident throw sparks.

oh wow so you might actually have a slightly different flavor of what I’m now calling Horse Shit Nickel™ ,now with fewer sparks.

On my CD150DPM, this shit throws sparks like the shit you see in car factories.

If you don’t mind sharing- where did you purchase your roll of this stuff from?

ebay. it was labelled as “99% pure nickel strip for battery builders” at the time I purchased it.

prior to that I had some that actually was the good stuff and totally redid the way I build packs because of it, so when I reordered I was expecting the good stuff again. I just got bamboozled is all, its my fault for not seeking a real source to begin with.

different sellers, but the time gap between the two purchases was significant and the first guy wasn’t around anymore.

Do you have by any chance a nickel plated copper supplier? Redundant request from me but as is I don’t have supply for that yet.

no I don’t. Sounds intriguing though.

You’re sending me spiraling into an existential crisis here doubting my nickel.

@longhairedboy are you not a fan of DS webbing style nickel?

I prefer solid sheets when building double stack trapezoidal and rombus p groups, and that’s most of what I do.

spacerless straight DS webbing is good for evolve mods though. I’m probably going to get some of that sooner or later.

I’m moving forward with this. The company i’m ordering from is Ametek, they’re based in Connecticut. I received my samples last night and settled on a full hard temper of the NO2201 (aka AME200-899L) alloy grade, and they allowed me to order 25, 10, and 5mm widths in a single 25 pound lot, which i think might be an unusual thing they let me do because they enjoyed my begging.

They were actually very interested in the fact that there’s an entire community of esk8 builders, a lot of whom are thirsty for high quality nickel. They don’t even see the enthusiasts at their level because they sell in bulk to people like aerospace contractors and government entities and massive corporations, whose leftovers end up in places like ebay and ali express where we usually find it (if we’re fucking lucky and the trolls aren’t trying to sell us mislabelled stainless). So they were pleasantly surprised and i think because of that they’re helping me out a little.

TLDR i’m buying it and in about 6 or 7 weeks or so i’ll be able to sell strips by the meter so you can build your own packs and not have to accidentally use shit nickel from who knows where.