Unity’s are now stocked by Amazon fulfilment and shipping internationally.

Note: If you have already placed an order through enertionboards.com we are unable to give you any information relating to your order as we are a completely separate entity.

Why would I buy one of those compared to all the others on the market?

It’s probably the best dual ESC on the market. The only ESCs I would trust as much are OG Focboxes (discontinued) and trampa vescs (though that’s from third party account, not my own experiences)

Being fulfilled by Amazon also removes the bullshit that comes with dealing directly with Enertion.

Do they have sensor wire ports I don’t see them ? Are they automatically linked so no can bus either?

Love mine so far!

It’s unfortunate that Enertion is/was having so much trouble with everything because it really put a damper on how great the unity is. Push to start and automatic shut off means less holes in your enclosure.

they have sensor ports, the orange silicone cover has flaps that expose the ports. I’m not exactly sure how canbus is handled, someone with real knowledge about that should answer. 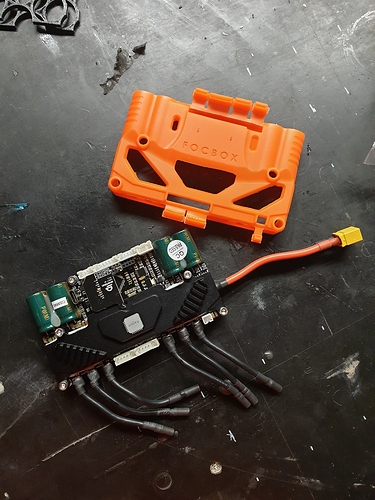 So are you official Enertion or not? If you aren’t then it seems shady to be listed as Enertion on Amazon

They’ve addressed this before, but imo it’s definitely ‘odd’

Ok lots of questions coming at me, which is good, gives me reassurance that this can be turned around. No I’m not an ex employee of Enertion. I own a US distribution company and we distribute light electric vehicles throughout the US. I’m not going to go into the details of the agreement with Enertion Boards Pty Ltd but the summary of it is that I’ve agreed to purchase products at a high price for a set amount of time and then my prices will be reduced. This will give Enertion its best chance …

The technical details are a bit outside my expertise but it’s a unified design with one MCU controlling two motors. I believe they are connected with an internal canbus on the PCB.

That forum thread has a lot of technical details buried in it. Also @Deodand is the lead engineer on the Unity but he is dealing with a firmware update right now so maybe he can further explain his product better at a later time.

I’ve been loving mine for the past 6 months. I would earnestly recommend it - simple and powerful.

They’ve addressed this before, but imo it’s definitely ‘odd’

Yeah I was following that thread, I just think it is misleading to have the company name as simply ‘Enertion’. Clearly, the are not…Exactly… Enertion. That is all

EnertionUSA would be different, or EnertionDistro or idk something else

It’s weird because healthy businesses wouldn’t generally let an Amazon distributor use their trademark via DBA.

Not saying it’s shady, just a bit telling and weird.

There’s the answer to it all

Enertion is welcome to communicate, fix things, and prove that wrong. Would actually be nice to hear from Jason!

I got a chance to meet with Kurt behind this effort on Saturday. Definitely a good guy interested in getting involved with the industry. This is definitely the most straightforward way to grab a unity in the US at this point in time.

Did you tell him literally dozens (maybe just a single dozen) of people on the internet are mildly confused by their naming decisions?

There is a lot to talk about at the moment regarding Enertion and the future so that was pretty low on my list of priorities.

I think as a newbie I am a prime example of the saying there’s no such thing as bad news for a business. As everything I’ve read about these which has been light but on the forums has been negative. And then now I see this thread come up saying there for sale through Amazon and all of a sudden I’m curious about wanting one.

And keep in mind, we’ve already had people on these forums order these & receive em. It’s 100% legit.

If you want a Unity the time is nigh.

For what it’s worth, I’m running Unity in 3x of my boards for thousands of miles and they’ve performed well and held up perfectly. It’s a solid product.