So anyone who’s followed any of my builds knows I’m a bit unique in the construction of my boards, but I believe I have stumbled upon the perfect carving machine (for me). Yes it’s heavy and slow but it seriously rides like a dream and hasn’t tried to kill me in at least a year.

In fact, I like it so much I’m going to make another one, exactly the same, only different.

For reference here’s the original one: 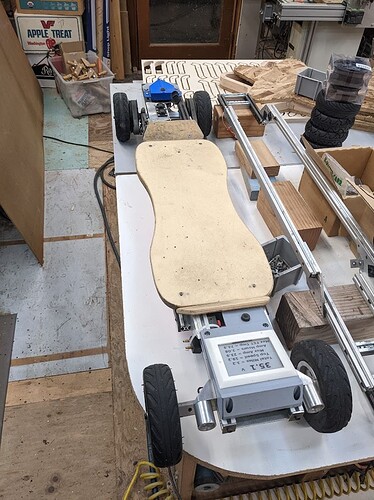 The new one’s not going to be quite so fancy. it’ll be 12S5P with a Stormcore 60D, same motors, same trucks, but Hoyt St. 7" Pneumies, but no lights (at least not at the start) and no fancy display.

So slightly larger tires, slightly more battery, slightly newer electronics. And I’m actually going out on a limb and putting an onboard BMS on it.

Here’s all the goodies 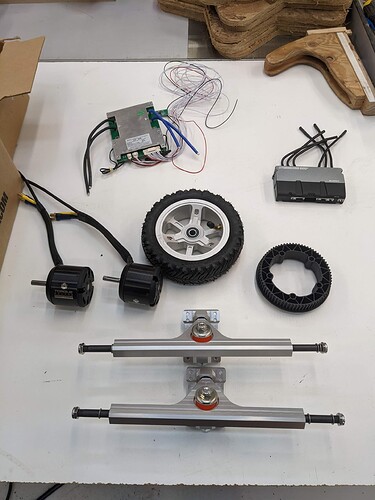 A few minor improvements to the battery packs - They are the same design as the old ones, but I’m taking it a couple of steps further this time towards my goal of completely solder/weld free battery packs. The idea is that if you have a weak bank or a weak cell you can simply crack the thing open, R&R some of the batteries in the pack and be back on the road.

And it gives me the ability to swap out batteries for higher-capacity at a later time with no welding required.

And the old weaker cells that come out go into other projects, so don’t have the spot weld marks on them.

Anyway, it worked pretty well last time, so I’m doing it again with the following improvements.

I changed out the contacts for ones with a larger contact patch. I also swapped out the original aluminum connectors for nylon. A little less strength, but non-conductive.

Here are all the connectors, cut to length drilled and tapped 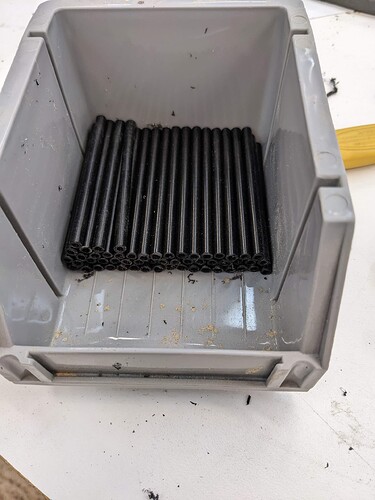 Here are some of the the frames fresh out of the CNC ,machine and PCB’s. 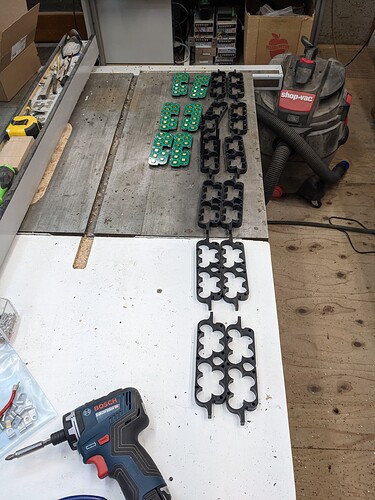 and here’s a couple of completed banks 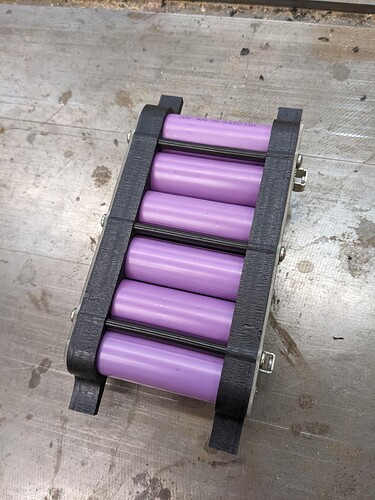 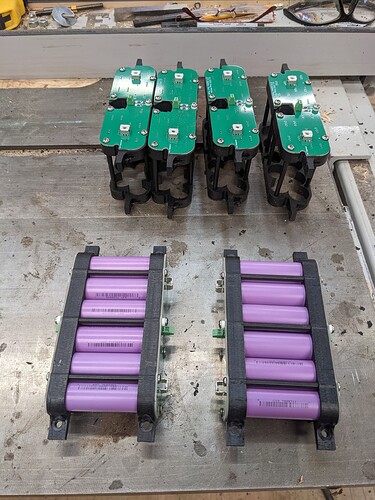 As you can see they have screw-terminal connectors so I no longer have to solder wires directly to the PCB’s. I can now solder the wires into little harnesses. 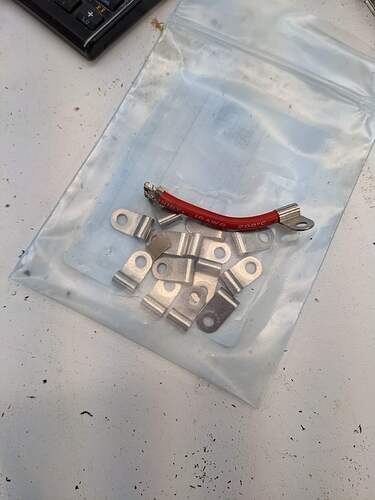 Ok Vendors, please consider the following - Standards! Yes, I know there’s so many to chose from but wouldn’t it be cool if we had a standard method of connecting the pulley to the wheel? Here’s my problem 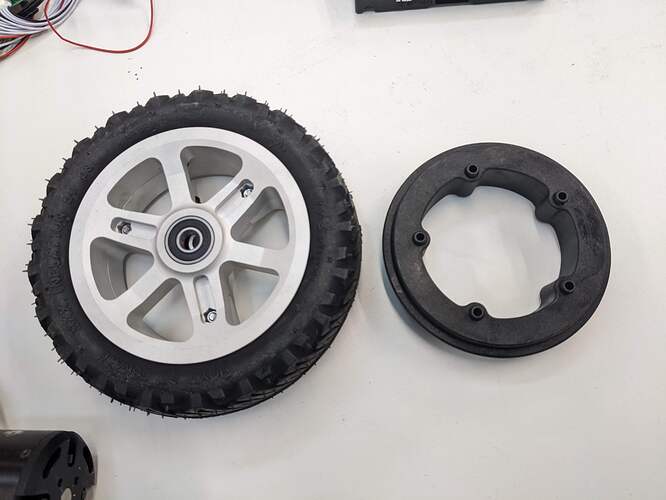 It won’t be that hard to cnc some little inserts out of Delrin that slip into the slots on the Hoyt wheel and attach them to an aluminum plate that then attaches to the pulley (an MBS 47072).

The frame is recycled from one of my very early builds - the first machine I built that had 18650’s and a not-home made ESC and unarguably the best motor every made, the Tacon Bigfoot. In fact, if I can get HFI working correctly on the Stormcore I might actually try to find a second Bigfoot and use those instead of the Torqueboard motors. 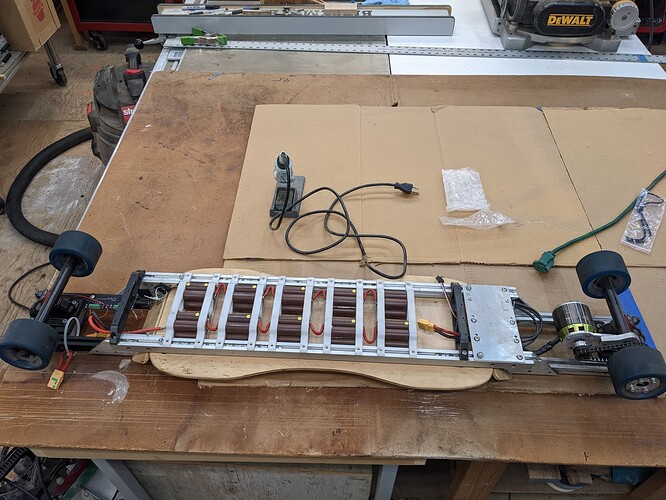 This board, as you see in the picture, chain drive and single motor and thanes, had more range than any board I’ve built since. If I were to load it up with some modern batteries and I swear I could get 60 miles out of it. I would totally win a single charge iron foot competition.

That’s it for tonight.

I know this thread isnt about the other build but the e ink display makes me irrationally happy. That and the use of ally extrusions gives proper mechatronics engineering vibes

standing platform is 23 1/2 - I think, but can’t guarantee that I based it on my snowboard stance.

I checked tonight, though, and it’s going to have to be longer for the new board since I can’t fit 6 battery banks in the existing space. So probably closer to 28 or 30". Another change I’m making on this board is to mount the electronics housing on top of the board rather than underneath, so I might be able to keep the same 40" wheelbase despite the longer platform.

Tonight I finished all the battery banks and soldered up the inter-bank connectors. 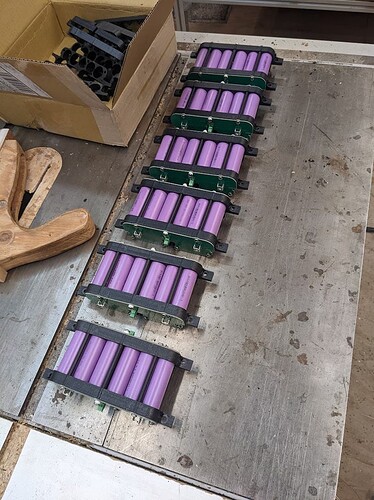 I know this thread isnt about the other build but the e ink display makes me irrationally happy. That and the use of ally extrusions gives proper mechatronics engineering vibes

Amazingly and by sheer happenstance the almuninum extrusion is just about the right amount of flex.

The best thing about the e-ink is the sheer size of the thing - I can see at a quick glance down what is going on (mostly how much battery I have left). The stats are kind of fun too. I think the speed is about right but the mileage measurement is wildly inaccurate. Probably because my wheel diameter isn’t exactly 6 inches. Or possibly because I’m bad at math.

I do have another display and most of the hardware to put it together, so at some point in the future the new board will likely have the same display. Of course all the code is based on the FocBox (and liberated from @janpom’s davega project). I’ll have to see how hard it is to port to StormCore.

I like longer platforms so I would like this. I hope it does not ruin the shorter one for you…

I lengthened the board to accommodate the 12S packs, here’s a test fit. 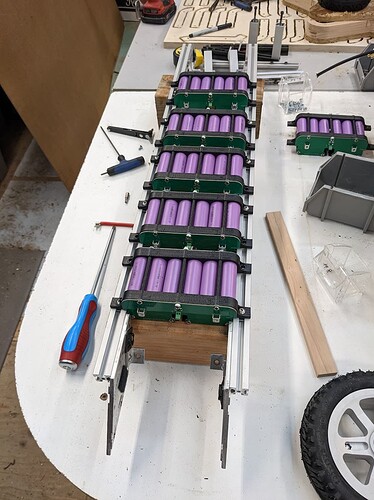 The new standing platform length is 24", so only a half inch longer than the old bed. Weird. But I guess it’s because I used to have the electronics box encroaching into the space where now the box will be on the top of the tail.

There is one little gotcha, the PCB’s are of copper fill so if they were to migrate and start rubbing on the aluminum risers I could get a short. But because I have a loop key this actually isn’t a problem. Either the board would short-on (bypassing the loop key) or the short would happen at the other end, in which case when I put the loop key in I’d get a big fat spark.

But nonetheless I’ll put some adhesive thick rubber in to make sure nothing untoward happens. It’s never been an issue because the packs are hard bolted to the rail, but one can never be too careful when it comes to batteries.

Next time I do a run of PCB’s I’m going to make them thicker and also mask off this section so the copper fill stops short. 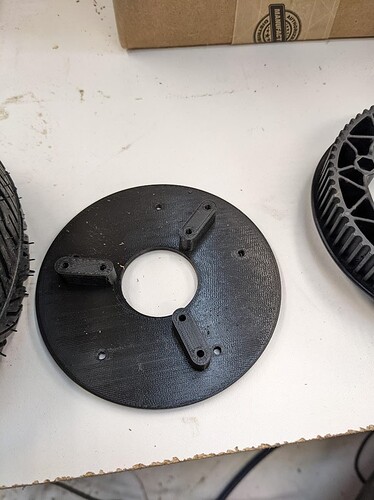 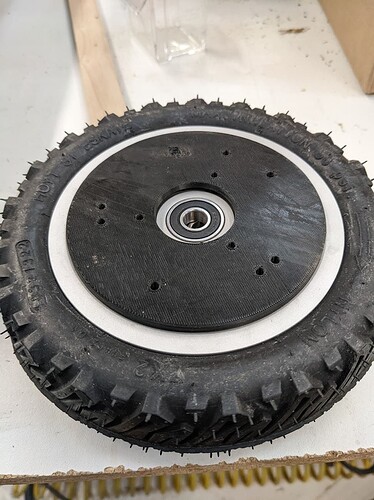 (got it right the first time!)

and mill up the tabs 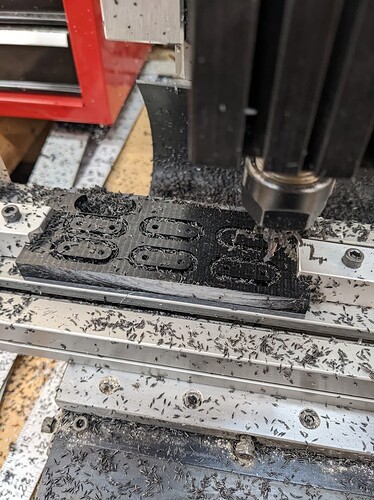 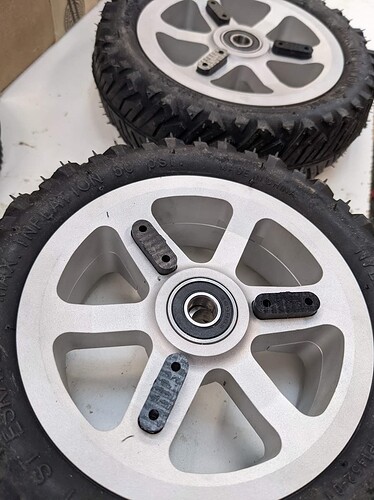 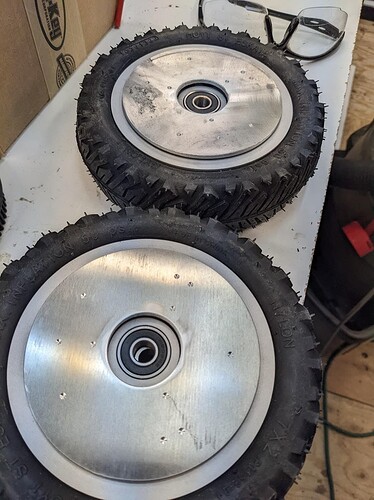 I just did peck drilling because I wasn’t sure of the final diameter - my plan is to tap this plate and I want everything to be 10-32 since I have every conceivable length of 10-32 in stock and very few metrics, but I think the rim won’t take them.

Got the hubs mounted to the plates, but as I suspected it’s going to take some M4’s to get them attached to the wheels. 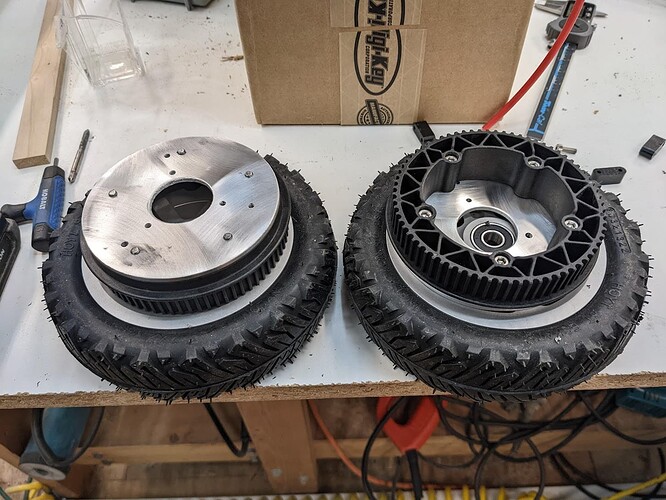 and I’m going to need to hog out a bit of the plastic to get the screws in. I might throw some nylocks on there too just to make sure, since the rim only has 3 mount bolts. Which means I’d need to hog out a bit more but not that much. Actually now that I think about it I should press inserts in there - otherwise I’d have to get a wrench on the nuts, which would be a hog too far. 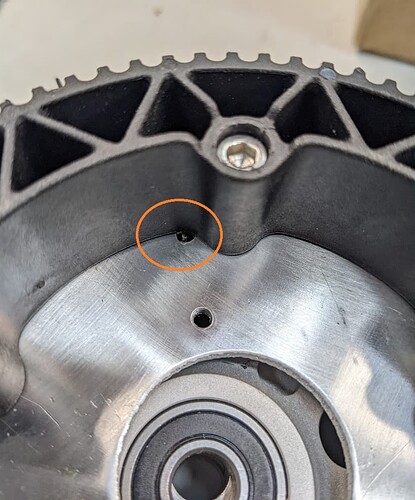 Incremental progress - got the threaded inserts and pressed them in. Not my best pressing job but I got better by the time I got to the 6th one… 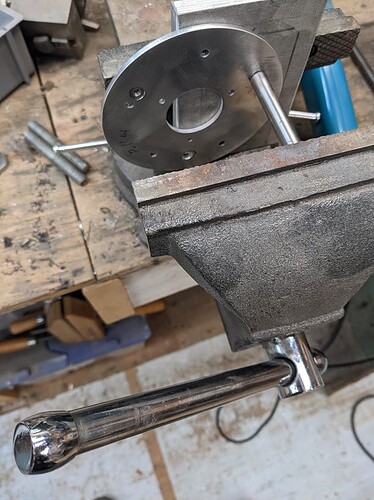 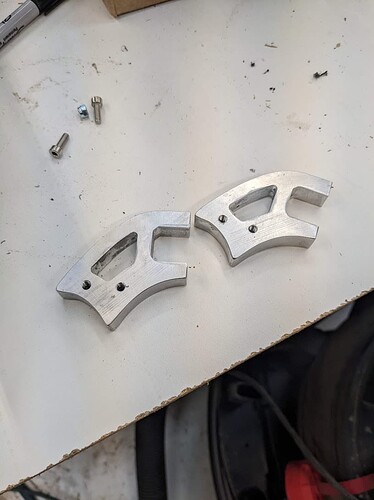 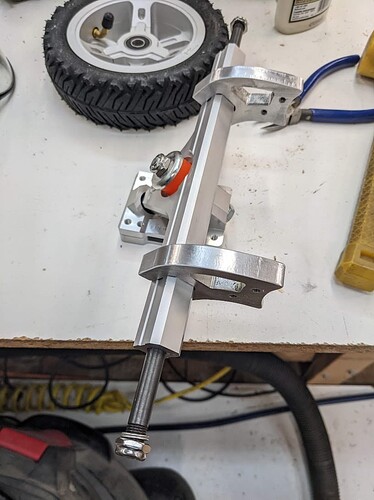 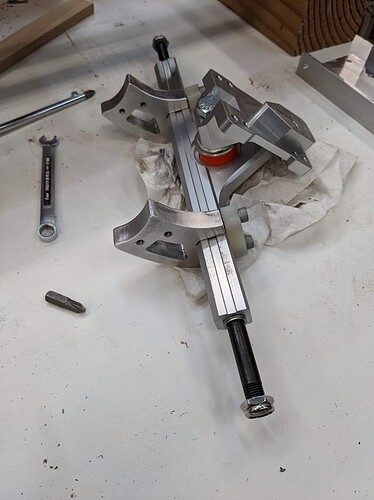 And, of course, once I have the threaded inserts I don’t need nuts, so no need to hog out anything, I just trimmed the screws flush. I made the mistake of setting the length when I had the plate on but not the insets, so all the screws turned out slightly too short and I had to do it all over again, but it’s only 6 screws. 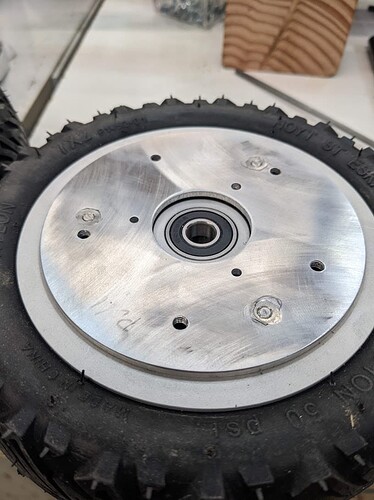 Then I found these Giant raccoon prints in the snow in my back yard. I knew I had a family back there, but I had no idea how big they are getting… 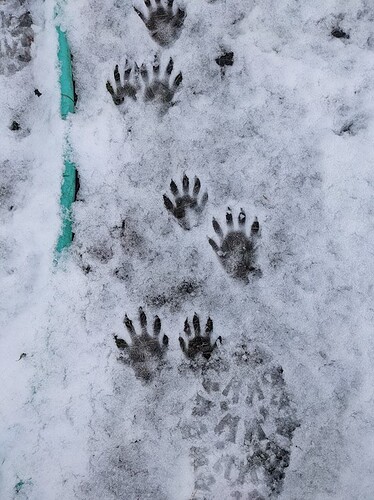 Here’s the plate with the insets just before final assembly: 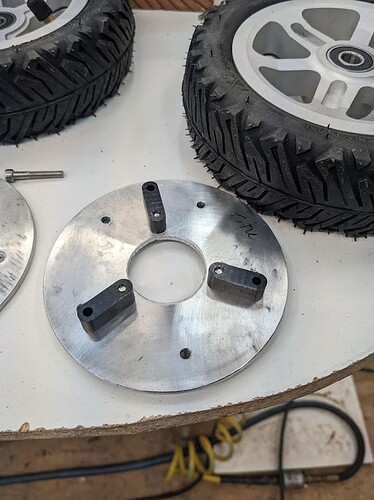 Then I put the wheels on the trucks and realized that the Hoyt wheels also do not have the correct size bearings for the trucks. They are close, but definitely not right, so first I had to remove them, which required making a bearing removal tool: 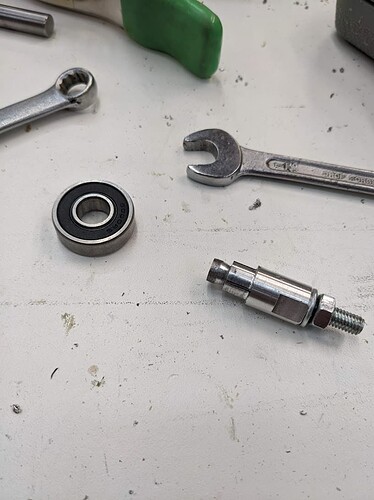 Now I’ll have to go hunting for the correct size bearing facing, once again, the eternal dilemma of finding a bearing where the ID is US standard (3/8") and the OD is metric (26mm). This is exactly the same problem I have with some MBS wheels I got, where I need the same 3/8" ID but the OD is 28mm. But I think MBS stocks those.

So not being able to completely assemble the trucks I turned my attention to attaching them to the board and made these cool new brackets that I think are going to dramatically decrease frame twist. I plan on making more of them to retrofit my old board. 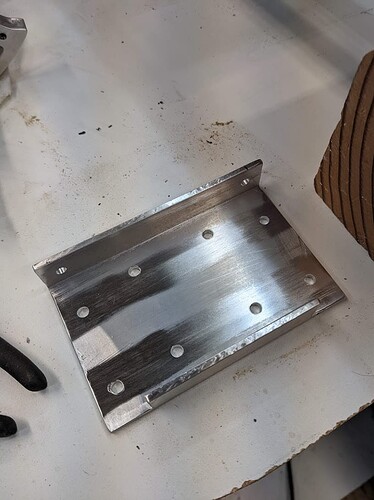 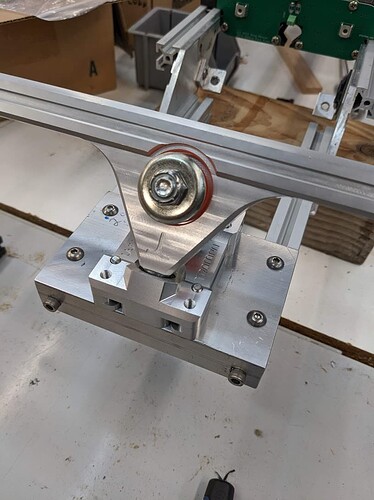 Lastly CNC’d the second half of the motor mount assembly 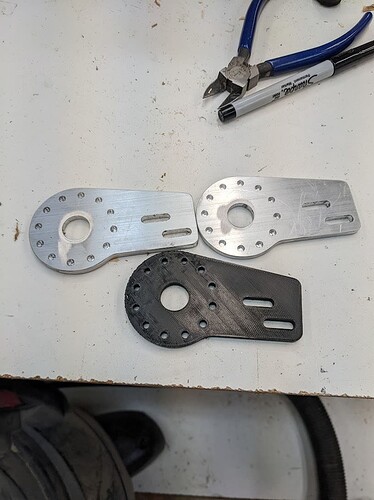 And that’s all I can get into this weekend - time to get back to more pressing but less fun stuff.