Pictures at the end

This is my first build thread and my second build. This started off with me searching for a deck with a sizable platform to stand on and also stiff flex built for speed. While having a nice long board for stability at speed I also miss the maneuverability of a traditional skateboard so I decided to go with the SR TKPs on this build. My deck search landed me on the DB Paradigm with its nearly 10” wide platform and 41” length everything seemed perfect not to mention the drop pockets to really lock feet in. I ordered a @Psychotiller Shuksan arm enclosure not knowing whether it would work out or not. Turns out it was a near perfect match at least for fitting the decks contours at either end. It left about a 1/4-1/2” gap running down the rails but some weather stripping foam ate that up with no issue.

So next comes the battery. At this point I had been reading about and researching battery building for quite some time and had a newly acquired lipo-powered Maletrics spot welder ripe and ready to start spitting glory so I designed and built an 11s5p using 30q cells in a bit of an unconventional battery config/shape for max utilization of the space allowed. So far I have been through a few charge cycles and the battery appears to be performing as expected.

Having completely given up on Enertion delivering my Easter Unity I decided to give the Flipsky dual pro a try. The controller fit in the tiny amount of space I had left so it was a no brainer. I’m currently just running Sensored BLDC because I like the screams. I will admit though, I may switch over to FOC(kinda miss it).

When ordering the FESC I decided to see what the VX1 craze was all about so I threw one in the cart as well. I ran the remote with its receiver plugged directly into the uart port which was pretty cool because I didn’t have to solder a voltage line to get readout on the remote. That coolness was quickly overshadowed by the fact I have an 11s and couldn’t get an accurate battery reading with the incremental presets of the vx1. I also missed my Hoyt puck so the vx1 got sidelined last week. Oh and the push button switch that came with the ESC was complete garbage which I had anticipated but was still optimistic about until trying it in the field. After a few incidents of the switch un-latching because of mild to medium shock/vibrations I made the judgement call to hardwire the esc and run just loopkey instead.

The stunning and sturdy @Boardnamics non-idler clamp mounts paired with 2x Sealed Maytech 6374 220kv motors are what’s turning all the voltage into pure happiness here. I’m a pretty light rider and have had absolutely no issues with the high kv on these motors as of yet. And I’ve screamed up some hills that I expected to be a real bitch. Even with my 18/36 gearing on 100mm Boas. It’s smooth and just doesn’t stop fucking going. The fastest I have gotten up to on this beauty is the 40mph mark with more left in the throttle. Being on SR TKPs makes it quite the experience. I guess I crave sketchy-ness.

While this build was underway I peeped the pirate braces that @Janux-esk8 released and just had to have em! Hence the name “Booty Hunter”. As for other accesories, I installed the flipsky nrf bluetooth module that way I could run Xmatic. Also grabbed some color coordinated braided cable sleeves from amazon. Those of which you see in the photos. 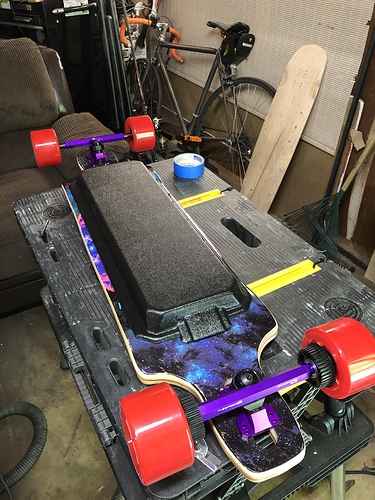 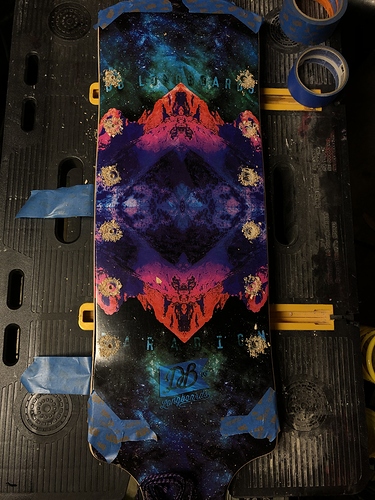 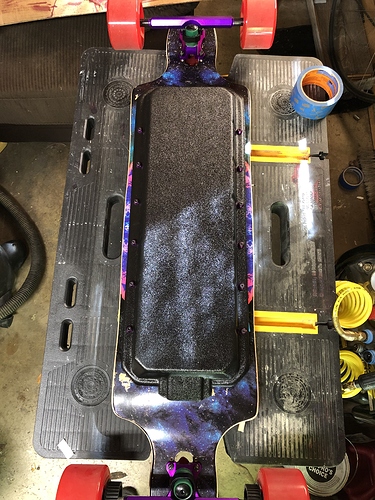 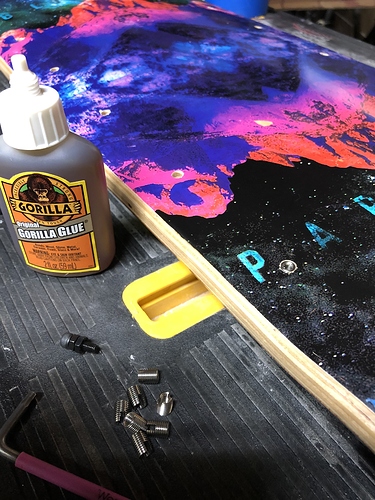 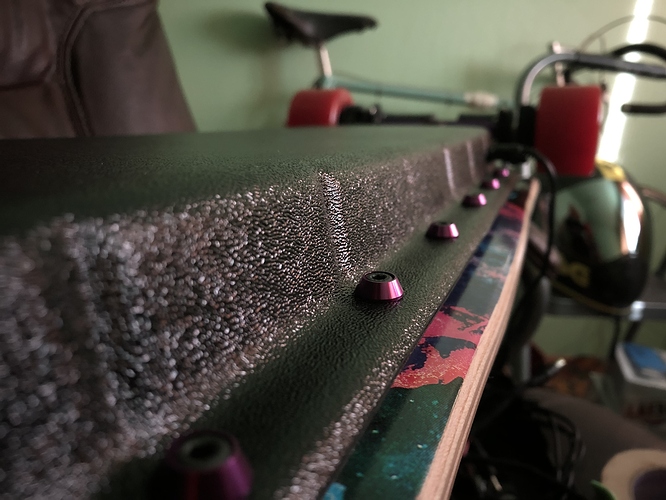 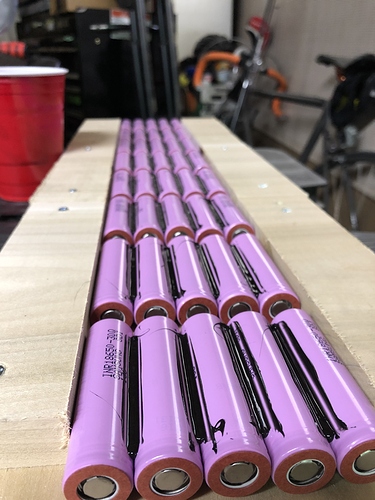 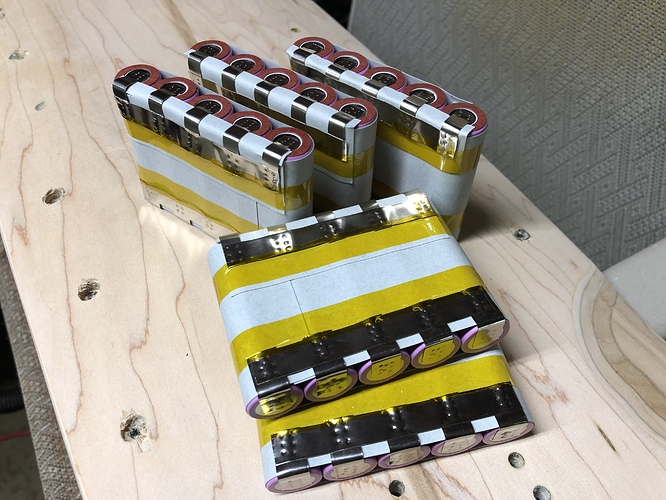 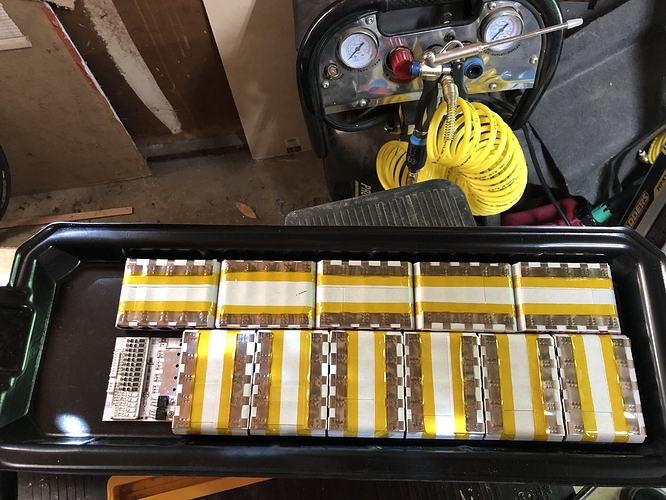 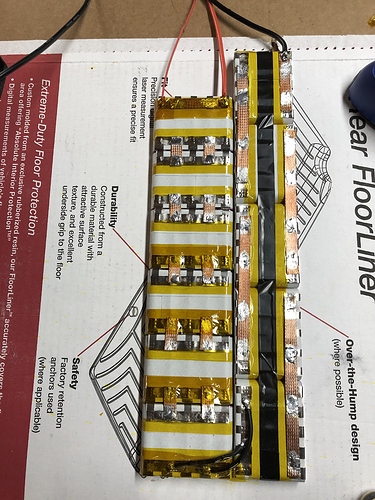 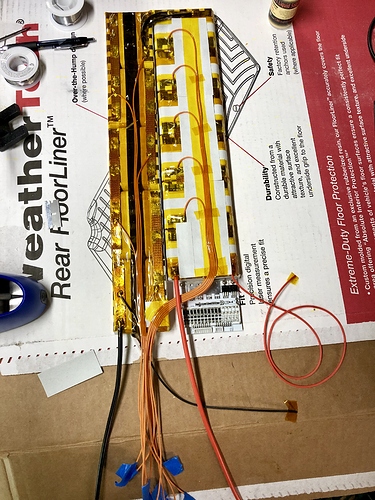 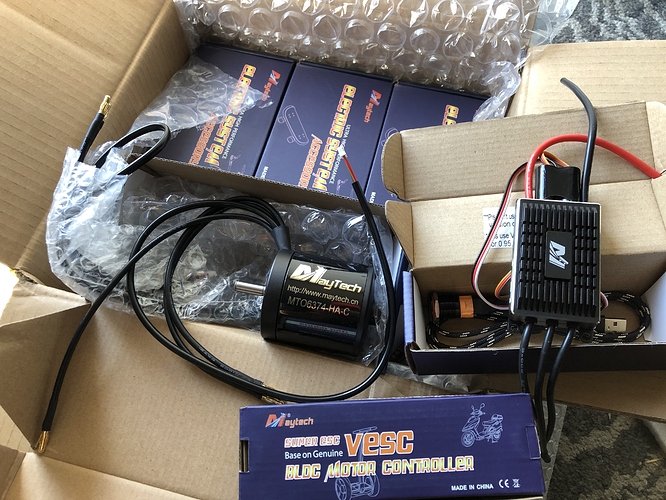 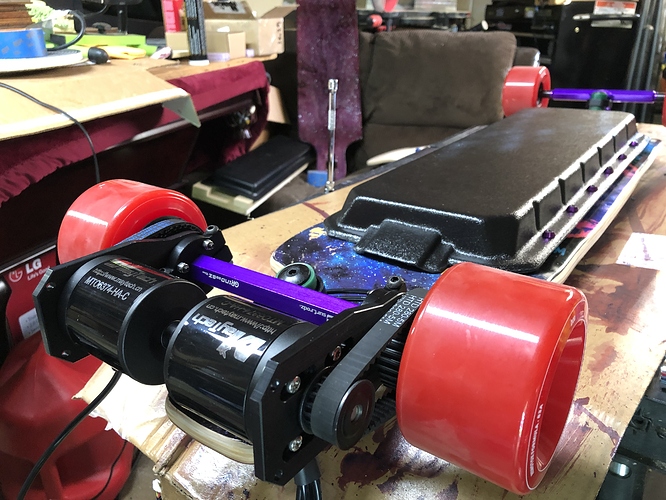 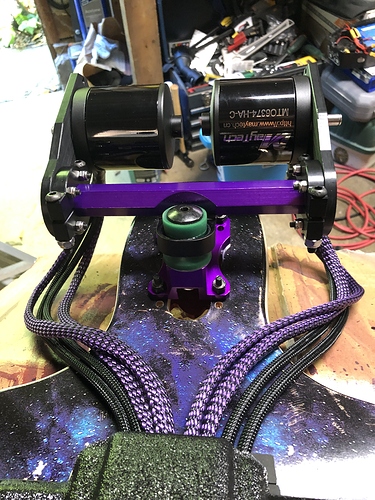 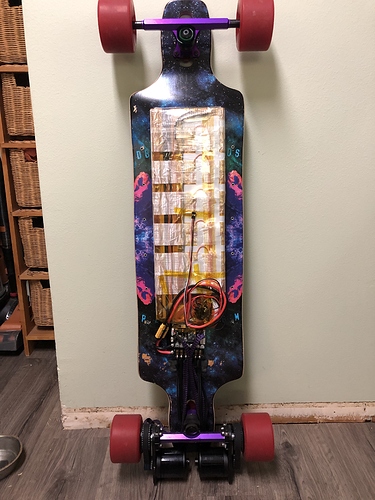 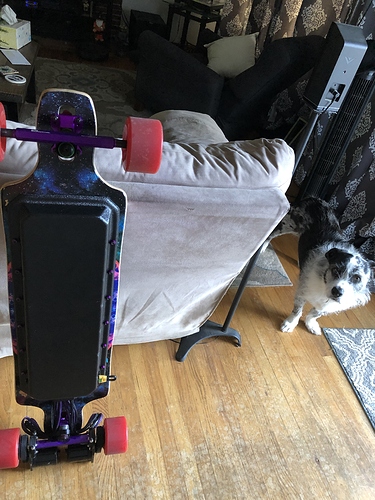 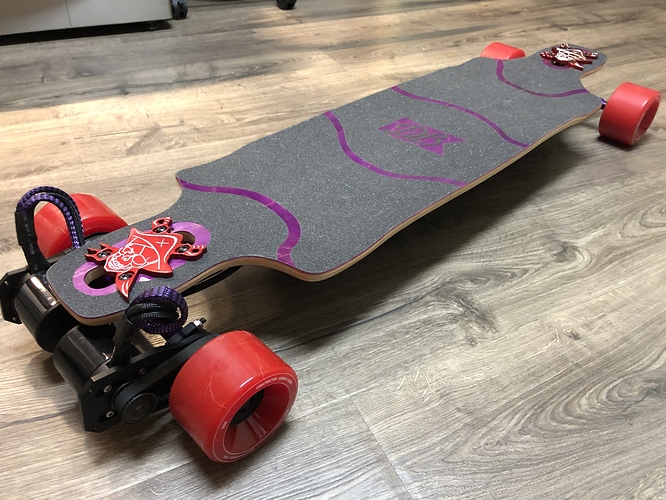 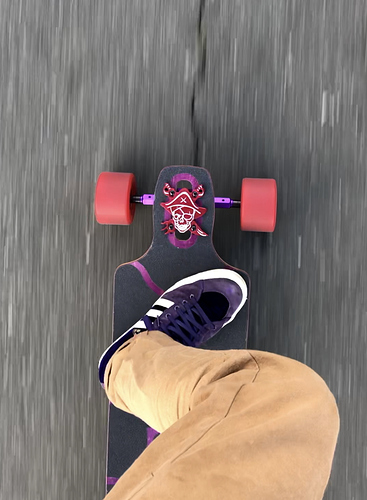 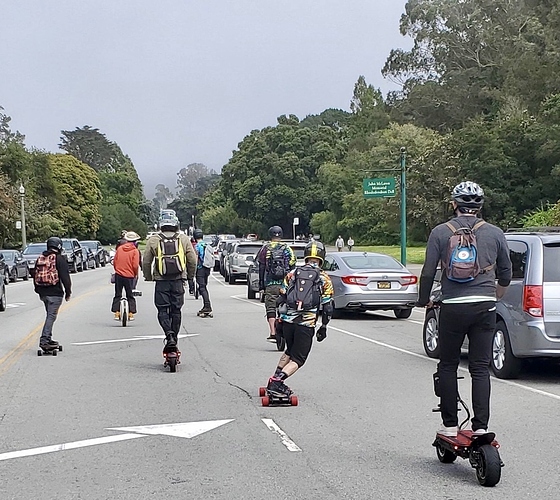 Pictures and nothing else!

My man!! Your shit is legit

damn the color cohesion is on point. Looks sick as hell…also I fucking love purple. that battery though nicely done

Dope build. Those are some clean cables. Looks great in person.

Dude those pirate braces tying in the wheels; your color way is on point! Also a very tidy battery my friend. Great work!

Short clip of speed this thing is capable of. Still some left in the throttle

No speed wobbles at those speeds? You’re not using split angles either, are you?

It’s definitely twitchy and I’ve had some recoverable wobbles. No angle split although I am running progressively harder duro bushing front through the rear. May try a de-wedge on rear adding stability for those 40+ attempts 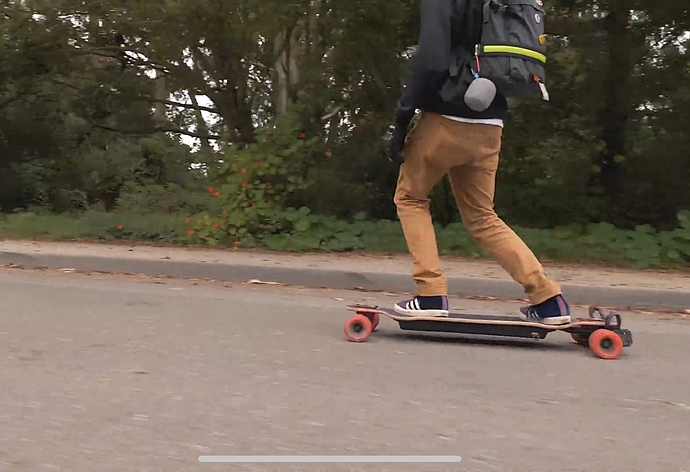 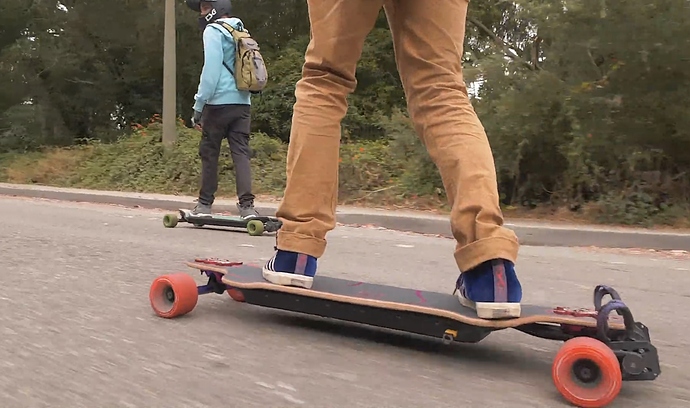 Awesome!
How did I miss this? I LOVE my DB Paradigm. Good to see another out in the wild✌️

Absolutely love it! So much that I got another one. Ok that’s a lie, UPS beat the shit out of it. So I ended up with 2 for 1

How is your Fsec 6.6 treating you? Did you get the plus with the switch?

I did get the plus w/ switch but after just one ride and issues with unlatching I ended up hardwiring/bypassing switch and soldered in a loopkey to control power. The FSESC 6.6 has treated me well so far. I’m a couple hundred miles in. The only trouble I’ve had performance wise was at one point during the cannonball race this past weekend I was hitting soft cutoffs. But this was under very extreme conditions after sustained incline followed by really steep hill climbs at speed. Once things cooled down it was back to normal. I don’t think the issues can be attributed to the esc solely because of my gearing/motor kv config isn’t ideal for the conditions I put it through. Max speed last weekend was 42mph… All in all, still very happy with this build