I wish those were still around. Such a solid design.

They are still a relevant design IMHO but they have a few major flaws.

They don’t conduct heat away from the stator nearly as well as an all-aluminum mount, it seems. They can’t mount reverse. They only have Caliber clamps available, no BN or other clamps.

That being said, they have some as-yet-unmatched advantages in certain use cases. “Smallest belt drivertrain” being key here.

I’m pretty sure it won’t matter, but I’m fine to temporarily use a front hanger that is about a cm or two wider than my back hanger right? I want to strip and paint both of my hangers but the extra front hanger I have that I know is safe for eskate is slightly longer than my current one. The extra back hanger is the same exact size though since the motors that came with it just had a slightly longer bolt on the strator. (or whatever the fancy name for that section is)

I’m leaving the base plates as they are though since they’ll match better with everything else as is and it means less taping work for me that way.

fine to temporarily use a front hanger that is about a cm or two wider than my back hanger right?

A couple cm will impact turning performance, that’s quite a bit of axle length

It won’t be a problem necessarily. But in the long term it’s preferred to have a shorter hanger on the front, the shortest that’s practical. At least, if you value performance more than appearance.

I’ll gladly take a small reduction in performance for a week so that I can make the better hanger look better to be honest. Aesthetics are an important part of my boards

My turning performance has already been drastically enhanced with my new surf adapter so I don’t think the axle difference will be noticed.

EMTB folks, where do you put buttons on your board? On top of the box seems like a worse and worse idea the more it sees flips and I instinctively want to stand on it. 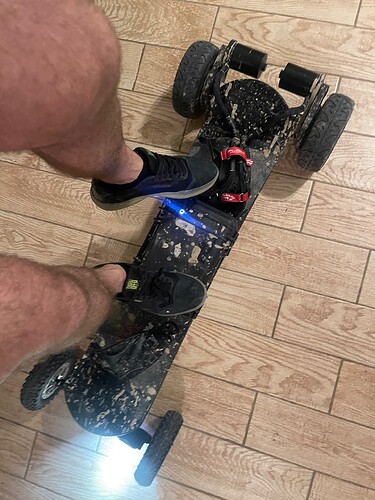 My single button is on the side of the enclosure box. Does double duty for mounting the horn bracket internally too. (Old pic below) 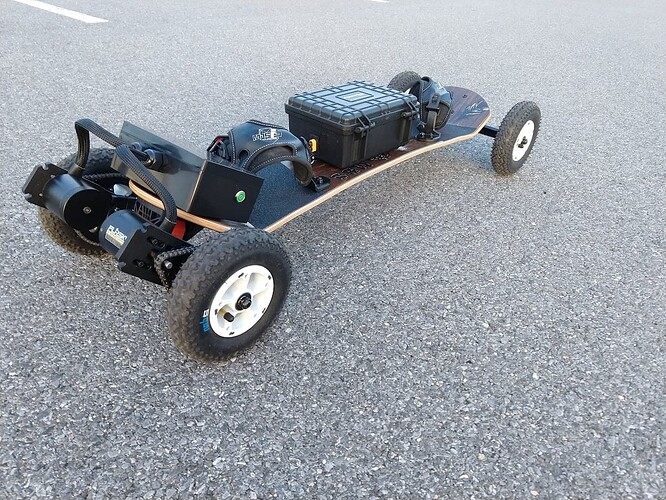 I do it on the toe side of the box always so I can lean over and turn the board on/off while on it.

Do Ling-Yi ESCs handle battery cut-off? Mostly I’m wondering if the recommendation is to use the BMS Discharge for Ling-Yis or not. I’ve got a cheap hub board that the battery conked out on and just want to get it back on the road cheaply. The BMS can handle more current than the ESC I’m pretty sure so cutting out from overcurrent shouldn’t be a concern. Also, it’s slow enough especially on low battery that it cutting out isn’t particularly dangerous. I’m just wondering what is considered best for these though.

it’s not really abruptly cutting off. It throttles you down more and more until you barely move (at least with the normal low voltage cutoff. Hard cutoff (safety) is an instant cutoff but shouldn’t happen with normal riding. I would still say bypass the bms.

I meant in the case that I did use the discharge function of the BMS. That just hard cuts off on most BMSes right?

That just hard cuts off on most BMSes right?

That I can’t answer you with confidence. I would assume yes as the bms probably only has one voltage cutoff and not 2 (start and end as escs have) just a guess though.

just hard cuts off on most BMSes

not all, but its safe to assume that majority of BMS just do one voltage cut off

Yes, BMSs only have hard cutoff

Are L-brackets from Trampa bindings compatible with MBS bindings?