What is your pick and why?

What is the difference between comfort and pro?

idk, I’ve never heard of the “Momentum Comfort” before

I own a set of Hollow wheels though. Pro version. 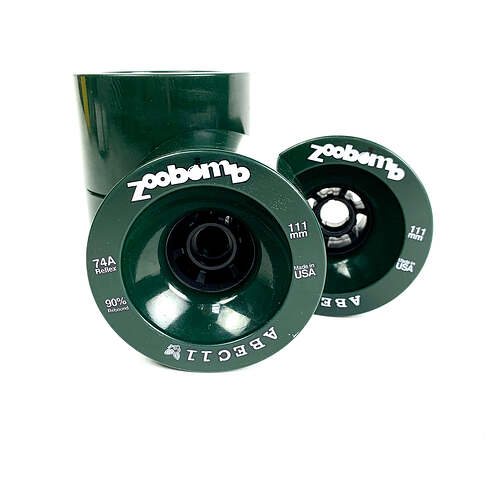 I’ve never tried the momentum wheels but I have had these and I really liked them and I haven’t heard anyone say something bad about them. They are on sale for black Friday, the code is, “fridayblack10”

What is the difference between comfort and pro?

Slightly different rubber formula. Comforts should have more durability from what I can tell, but slightly less grip.

I have both but haven’t ridden the Comforts yet. You cannot currently buy comforts though, because he had some delam issues. they are being fixed and are on preorder for February

A question like this cannot be truthfully answered unless we know what you’re optimizing for.

Are you optimizing for price, comfort, range, reliability, or appearance?

Haha, digging too deep. Just want to know your preference. It is for a fuck-around board. Don’t care about price, range. Looking for quality, performance. I do like the momentum but hesitate for classical thanes. Share anything you like.

In that case I would get the MAD 105mm Wheels

Or like others have mentioned, there are some other wheels you didn’t mention. Zoobomb 111, Dad Bod.

But the Dad Bod and Momentum wheels are extremely new and I don’t think there’s too much feedback yet, especially for the Dad Bod wheels.

Are you optimizing for price, comfort, range, reliability, or appearance?

In that case I would get the MAD 105mm Wheels

The MAD Wheels don’t get flats though and just always work.

This is for my f-around board, which i want it on solid wheels. There’s another project ongoing, inter-city commuter, which will be on NKP-150mm stooge that may finish on 8" tires…

What are people thoughts on these MakerX 6354 motors? seem like the old flipsky ones before they battle-hardened them

i know bugger all about what makes a good motor tbh, so any motor scientists feel free to chime in

Omg. This could so easily be modified into a ballsack

What happens if I keep increasing my max motor amps setting in VESC? Is the temperature of the mosfets the only danger? What about motors, if they’re bellow a dangerous temp can max motor amps be further increased?

Make sure fault timeout is around 85ms (instead of the default 500ms) so if it cuts out, you probably won’t loose your balance and topple.

Why does the switching on an antispark blow up the gates but the gates on the phase drivers are fine even though they have so much more abuse?

Tackling the anti-spark problem (Title by a good friend)

Most “inrush limiter circuits” fail because they are operating in linear mode during inrush. It’s a design limitation on almost every one.

Imagine a FET is a resistor with a variable resistance. When it’s “off” the resistance is [nearly] infinity and when it’s “on” the resistance is [nearly] zero. That’s all fine and dandy until you add capacitors to the load, like the filter capacitors on VESC and other ESCs. Right when it turns on, it’s effectively a momentary short circuit with [not really…] infinite current because the capacitors are empty. So what the antisparks do is they limit inrush current by turning on not from zero to full blast, but gradually over several milliseconds they ramp from [nearly] infinity to [nearly] zero ohms. It’s this period during the ramp that is the problem, the FET itself is taking almost the entire load due to Ohm’s law because the capacitors have effectively zero resistance to inrush. It’s said to be operating in “linear” or analog mode at this point, as opposed to “digital” mode where everything is either on or off with no in-between. This is extremely stressful to the junctions inside the FET and technically exceeding the design limitations for a very brief period of time. Each time it’s powered-on, it’s taking a tiny bit of damage.

The way to ameliorate this is much the same way a loopkey works – you have a “precharge” circuit where the nonzero inrush-limiting resistance is provided by an actual discrete resistor instead of the FET junction itself. So you have one FET with a heatsinked power resistor in series, that is separate from the one or more FETs on the main power switch.

So in order of operation, you’d have a single FET turn fully on [nearly] instantaneously (digitally) with a resistor in series to charge the filter capacitors, then once the output voltage approached the supply voltage (meaning the capacitors are nearing full charge) then the main FET(s) turn on [nearly] instantaneously (digitally) to supply high-current power to the system. This is never operating in “linear” mode but is “fully digital” and will not suffer the incessant failures that plague the inrush-limiting Vedder design. The power limiting and heating is moved to a discrete resistor instead of burning off the energy inside the FET junction itself, which stays cool during inrush.

Why does the switching on an antispark blow up the gates but the gates on the phase drivers are fine even though they have so much more abuse?

Because it’s not acting as an inrush limiter. It’s turning on to full blast instantaneously.